McKayla Maroney became one of the biggest U.S. athletics stars after winning the gold medal at the 2012 London Olympics. She was only 16-years of age at the time, and even though her performance at the Olympics was exceptional, she reached the stratosphere of fame for a whole different reason.

Maroney was photographed on the podium with what looked like a disappointed face after the women’s vault competition – this where she was awarded the silver medal. The picture spread across the world, and the gymnast rapidly became a sensation. 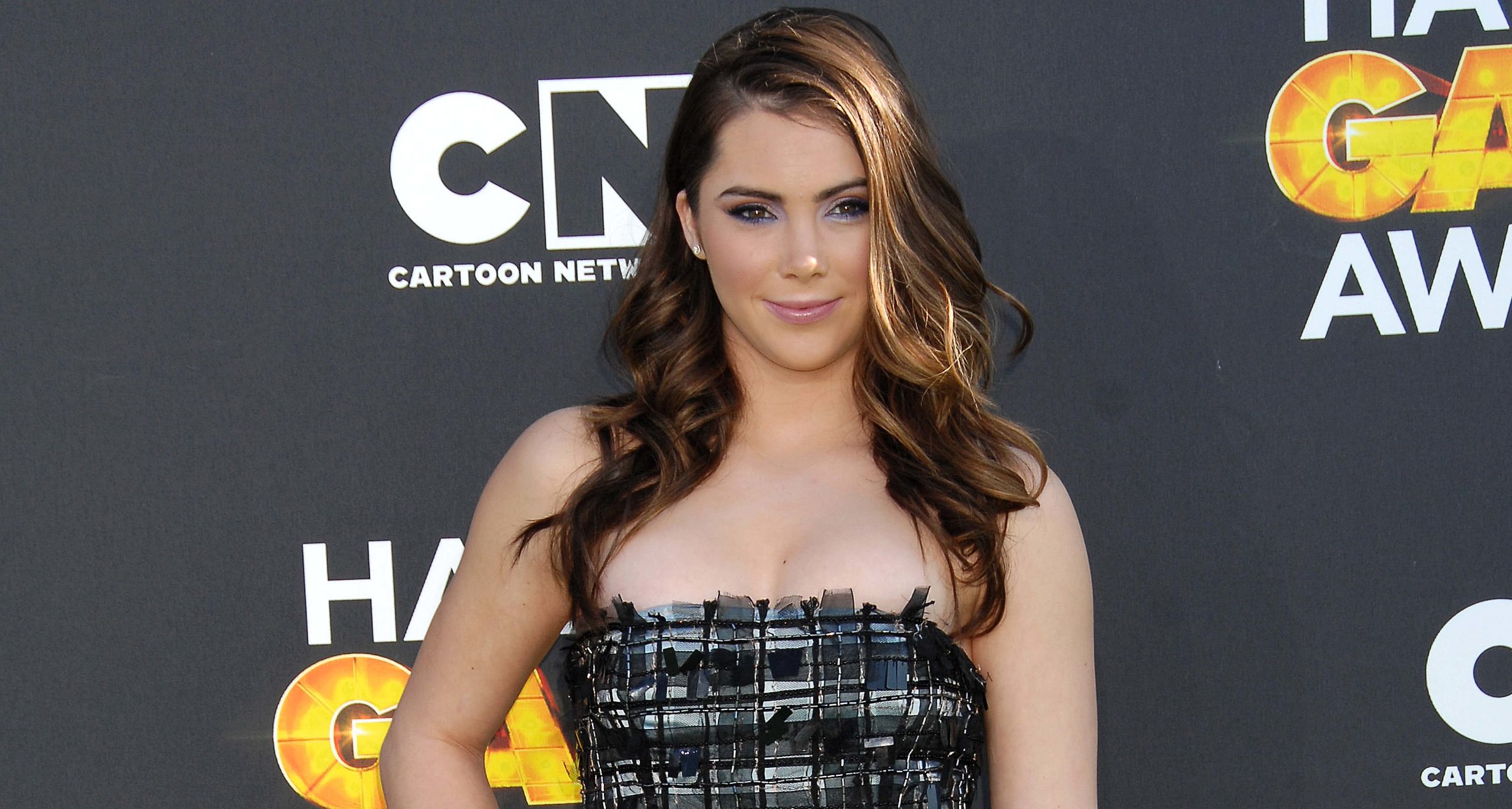 Today, Maroney’s career in athletics is over and she’s moved on to pastures new. Not only that, but she’s been experienced some excruciatingly heartbreaking years which have shaped her life in a way she couldn’t have expected.

McKayla Maroney began her gymnastics career as a very young girl. In the beginning, however, it wasn’t necessarily her passion for the sport that was the main diving force.

McKayla Maroney – early life
Born McKayla Rose Maroney on December 9, 1995, in Aliso Viejo, California, her parents had engaged in sports long before she was born. Her mother Erin Maroney was a figure skater and high school sports player, while her father, Mike Maroney, played quarterback at Purdue University.

It turns out that Maroney was a very energetic child, and her mother thought she needed an activity that fitted.

“My mom put me in gymnastics because I had so much energy, and I was always running around, so she thought gymnastics might take away some of the insane amounts of energy,” Maroney wrote on her profile on U.S. Gymnastics.

As Maroney explained in an Elle profile piece, she owes her career to the gorillas on Tarzan. As a toddler, she imitated the animals by hopping around on her hands and knees. Her mother, Erin, decided to enroll then pair of them in “Mommy and Me” classes at an Orange County gym. Before long, little McKayla was hooked.

McKayla soon found her passion, and by age eight, she was training in the gym for up to eight hours each day. In her yearbook in fifth grade, Maroney wrote, “I want to be in the Olympics!”

No obstacle was too big for her, and that’s thanks to her mother, Maroney says.

“My mom was good at letting her kids make their own decisions,” she told Elle. “Looking back at it now, I wouldn’t have been who I was without my mom letting me be independent.”

“She was happiest in the gym”
Even when she was at home, Maroney found a way to practice through watching her hero, Carly Patterson, who won gold at the 2004 Olympics. Maroney would repeatedly run through the routine in her head.

Maroney’s mother realized her daughter was special. Alongside her friend, Kyla Ross, McKayla started practicing at the Gym-Max in Costa Mesa and later at the All Olympia gym in Los Angeles.

“She was happiest in the gym,” Maroney’s mother Erin said. “When she walks in the gym, there’s a feeling that comes over. It completes her.”

“I just loved doing stuff that most people can’t do with their body,” McKayla added. “I can flip in the air and just fly on certain things. And I just love that feeling of working so hard on something that you really, really want and reaching that goal. It’s the best feeling.”

It didn’t take long before Maroney had become a very promising gymnast. At 14 years of age, she competed in her first U.S. National Championship in 2009, where she ended up winning bronze in the Vault Junior Division. She showed great talent, and this was nurtured by her coaches, two former elite gymnasts from Russia and Bulgaria.

It was a great start – and for the first time she ever managed to complete the Amanar vault skill. So, what does that entail?

Yahoo describes it as a round-off onto the springboard, a backhand spring onto the vault, then a flip with 2 1/2 twists with ones body entirely laid out. Sounds difficult? That’s because it really is.

“The first time I did, it was at Visa Championships, and I was just thirteen years old. I was just really little, and I didn’t really know what was going on. But I just did it, and I was just very happy that I landed on my feet,” she said in 2012.

At the 2011 World Championships, McKayla, at the age of 16, won gold in the vault final and another gold in the team final. Just as people had earlier predicted, Maroney was one of American gymnastics’ new bright shining stars.

Not long after that, she traveled to the U.S. Olympic Trials in San Jose to compete for a spot on the roster for the 2012 London Olympics. Alongside her childhood friend Kyla Ross, Maroney’s dream of competing in the Olympic Games looked to be edging closer.

“That would be like the coolest thing,” she said at the time.

“When I think about it, it makes me want to cry almost. To have that childhood friend, to have somebody you’ve worked so hard with, we went through so many things together, to have two girls from the same place like Aliso Viejo to make it to the Olympics would just be awesome.” 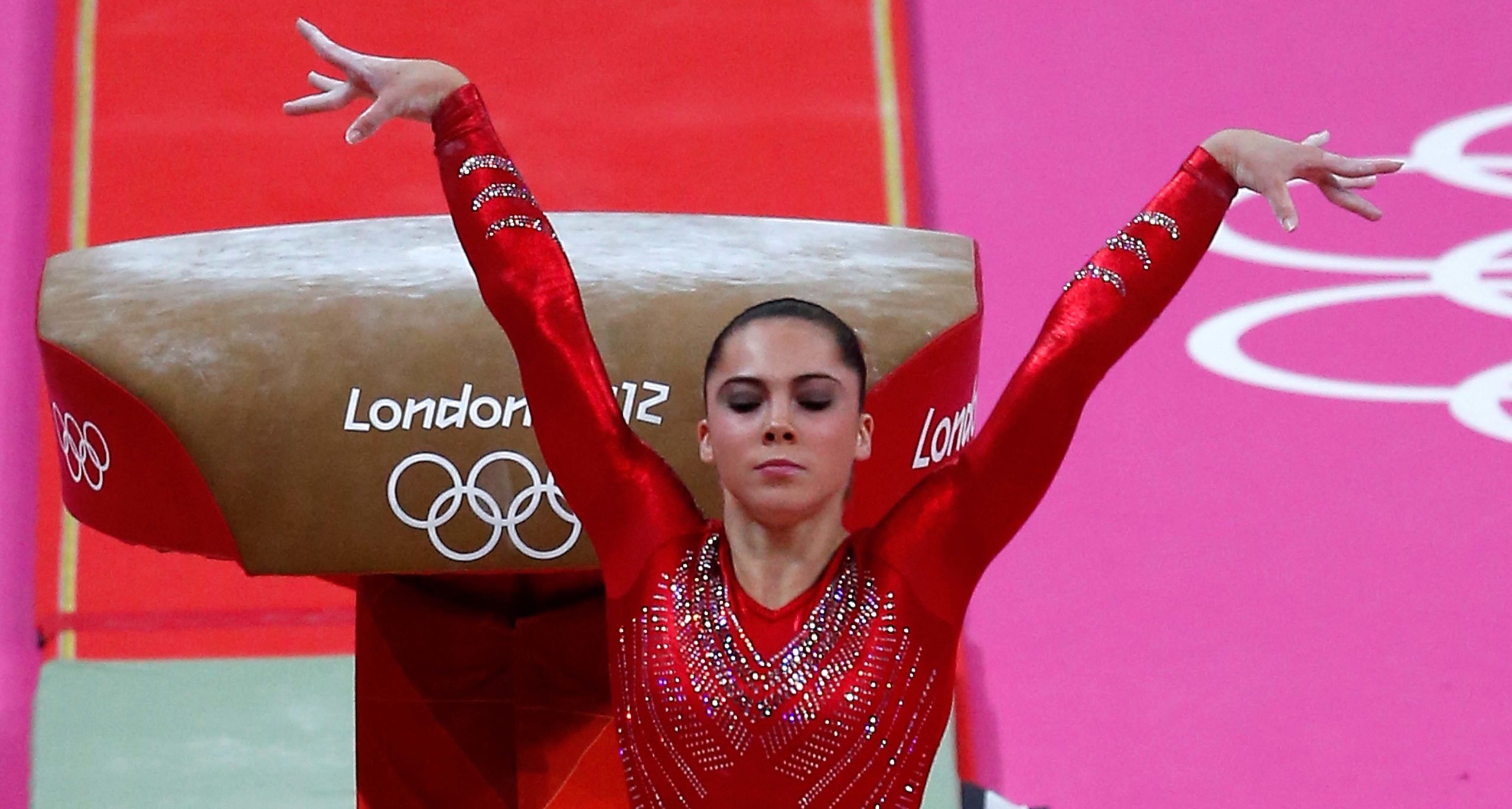 Of course, much of the rest story might be familiar. McKayla Maroney impressed enough to land a spot on the Olympic roster for London. Her dream had come true, though merely competing in the Olympics was only the beginning.

McKayla Marone’s – facial expression at Olympics
In London, McKayla went on to become an American athletics hero. She won the gold medal in the team competition – alongside childhood friend Kyla. Her performance in the vault section is considered one of the greatest of all time, with some experts arguing it was completely flawless. The judges still managed to deduct 0.267 points from her score, but that didn’t make her performance any less unforgettable.

After her showing in the team event, McKayla was the favorite to win the individual vault competition. Experts didn’t think there was anyone else who even had the slightest chance of winning – NBC broadcasters Al Trautwig and Tim Daggett declared that it was pretty much guaranteed that she would take gold.

Of course, in sport as in life, things don’t always go as expected. McKayla ended up winning the silver medal after falling once in the final. We would like to add here that being named the second-best individual gymnast in the world is, of course, a fantastic result, despite the disappointment McKayla surely felt.

But though she was now a sports star, known all across the world, her new-found fame after her performances was nothing compared to the attention she garnered on the podium.

During the medal ceremony, McKayla was caught on picture making a face that was, how should we phrase it, less than appreciative.

As a result, she became an internet sensation. In 2014, McKayla Maroney spoke with Inside Gymnastics and explained that she only did the face for “literally two seconds.”

That was all it took. 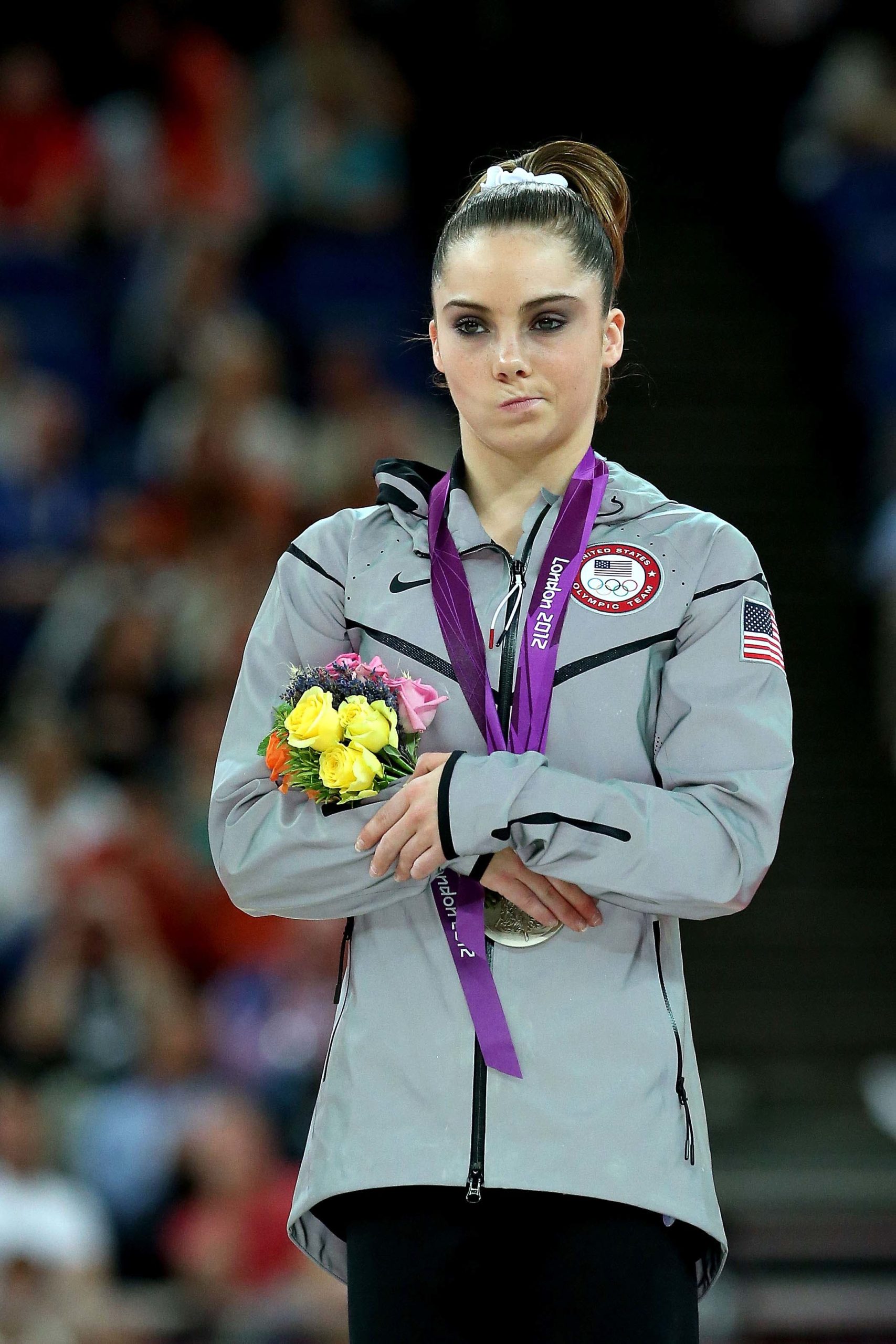 “Like, if you watch the video, it’s two seconds. And I remember thinking, did I just make a face? Because it’s natural. I do it all the time, I have pictures of me when I’m little doing it. I have it on my Mac computer when I’m like 13,” she said.

When she returned to her room in the Atthletes’ Olympic VIllage, she got to learn just what her facial expression at the award ceremony had been turned into. It began when her dad sent her a text telling her to check the internet. There, she could be found next to the likes of Mozart and the moon landing.

In no time at all, the face became something of a signature for Maroney. She got to meet then-President Barack Obama, and together they took another picture making light of the expression.

Though McKayla thought it was funny, becoming a meme wasn’t really on her mind in the hours and days after the Olympic final.

“I was sad. I was upset. And I was not impressed,” Maroney said, adding that she couldn’t sleep for five nights. Try as she might, she couldn’t help but go through her fall in the final again and again.

In any case, Maroney looked set for a long and successful career. She won gold at the 2013 world championships and set her sights on competing the 2016 Rio Olympics. Sadly, however, she was forced to step back from competition in 2015 due to many health problems. 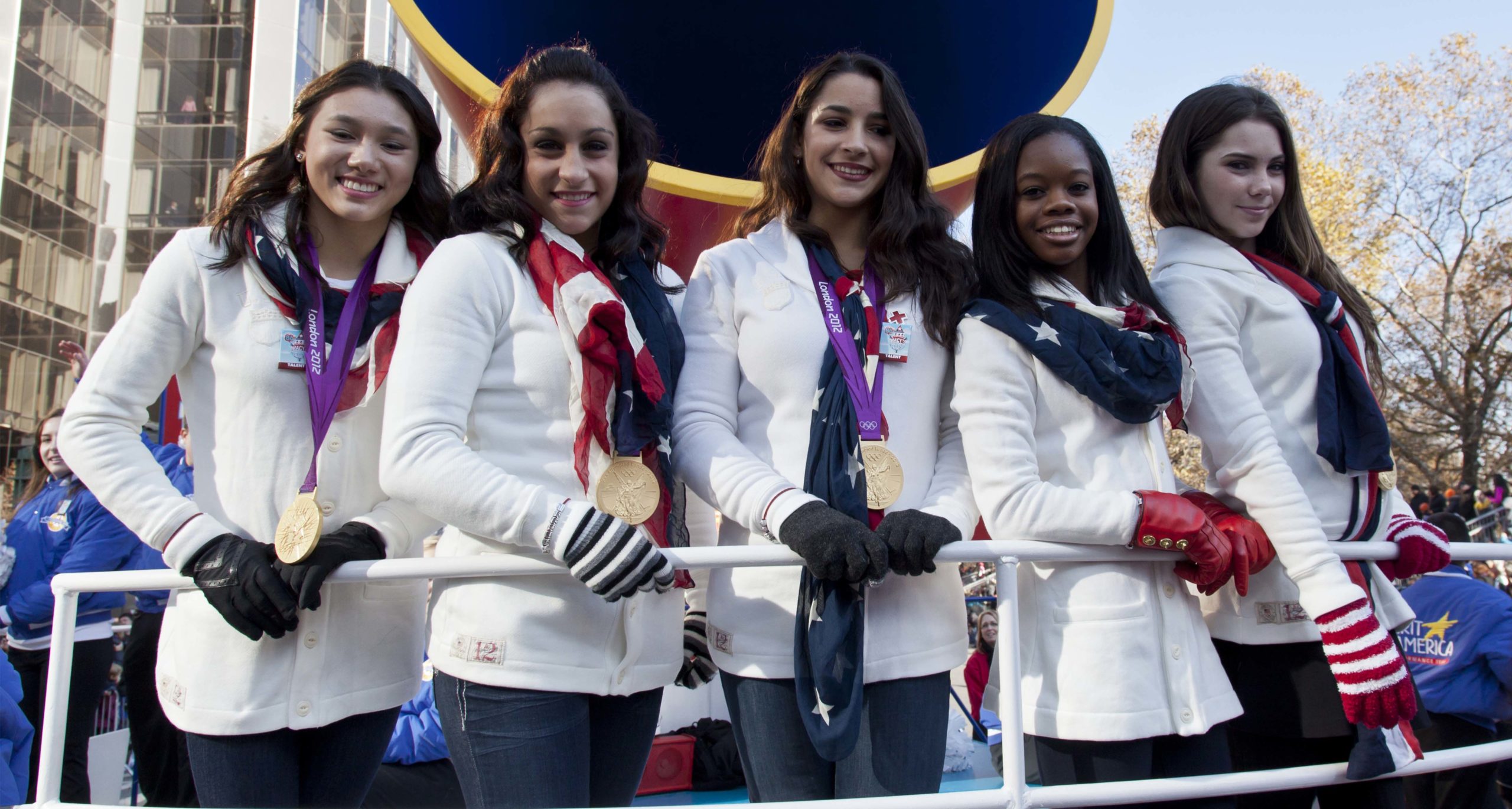 “I don’t want anybody to ever think that McKayla is retiring. I don’t even want people to use that word,” Maroney said in 2016. “The only difference is I’m not competing anymore.”

Spoke out on team doctor Larry Nassar
“You have to be so passionate and so in love with gymnastics to be able to get to the Olympics,” Maroney said in October. “When you start losing even just an ounce of that, I was just like, I’m not going to make it.”

Even though Maroney decided to leave professional gymnastics, she has continued to play a vital role for women worldwide. She was amongst the brave girls who spoke out during the prosecution of disrgaced former U.S. gymnastics team doctor Larry Nassar.

At the end of 2017, McKayla then stopped posting pictures to her Instagram page and disappeared from the public eye. Then, two years later, she published a picture, with the caption: “Last few years, a lot’s happened.”

This is what McKayla Maroney’s doing today
In 2019, she enrolled in an online course for people with eating disorders and began meditating to cope with burnout.

Together with Los Angeles-based producer Maxwell Flohr, she’s written tracks based on her life experiences. The two have produced around 25 tracks together, as per reports.

In 2021, she underwent surgery after doctors discovered she had kidney stones. Now, it finally looks like she’s in charge of her own life again. Today, McKayla’s writing a memoir and active in helping people who have experienced the same traumas she has.

“I want to be looked at as someone who just keeps going because that’s what we have to do in this life,” McKayla Maroney told Elle.

“For so long, I was surviving. Now I feel I’m actually living.”

McKayla Maroney was a great gymnast. At the same time, she’s also proven herself to be a courageous woman, and we greatly respect the fact that she continues to help others through her actions.