Every baby in the world is born unique – but let’s face it, some babies are so uniquely special that everyone in the delivery room stops right in their tracks.

Ever since Luna Tavares-Fenner came into the world, her appearance and “Batman birthmark” have fascinated people. 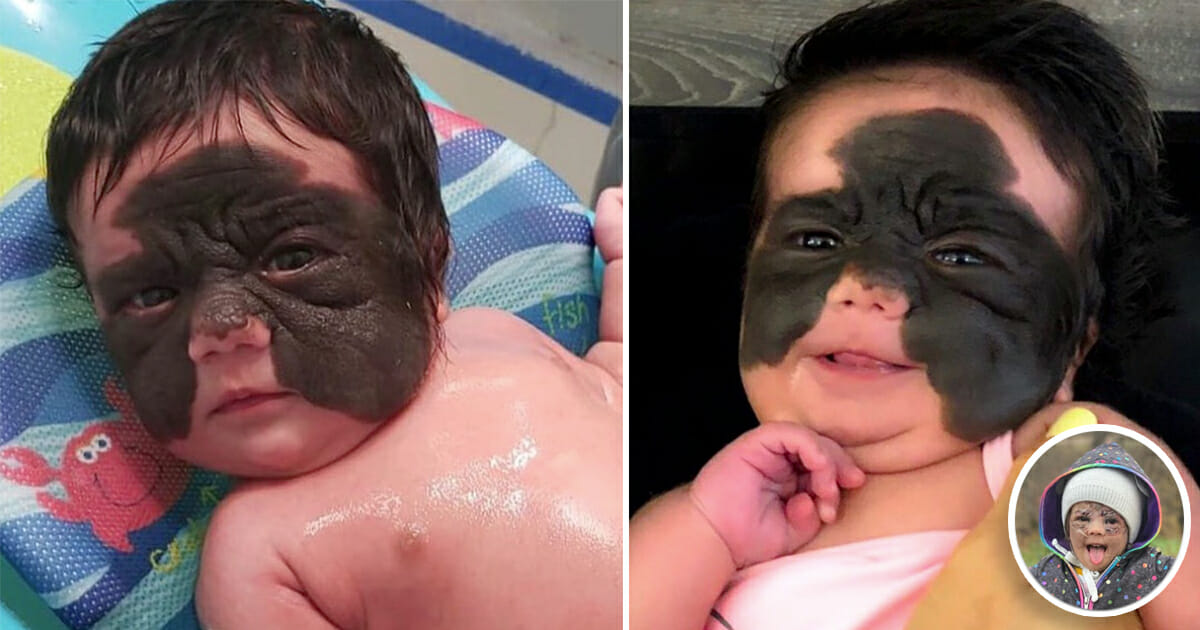 Recently, she’s starting to get a lot of attention again, and there’s a reason for that.

Luna has been able to remove her famous birthmark after some high-tech, pioneering surgery. Personally, I think you’ll have a hard time not smiling when you see this beautiful 2-year-old girl today…

Luna Tavares-Fenne, from Florida, is in many ways like any other 2-year-old in the world. She’s a happy-go-lucky girl who loves laughing, eating, and bouncing around.

Unfortunately, Luna was born with a very rare skin condition called congenital melanocytic nevus, and that has, of course, affected both her and her family.

Luna’s mom, Carol Fenner, was “shocked” when she gave birth to her daughter in 2019. After noticing a dark patch covering a large portion of her little girl’s face, she was stunned and afraid. Luna was born with a black mark that covered most of her face, forming something that looked like a Batman mask.

It’s not hard to understand why Carol was so shocked. In just a few days, the parents’ happiness over having a child had turned into extreme concern. She had no idea that her daughter would be born differently; her last ultrasound before the birth had revealed nothing abnormal.

Moreover, doctors weren’t even sure what the dark patch was until four days after Luna was born. Fenner said Luna was hospitalized for six days after birth while doctors ran tests.

After a lot of research, Luna’s doctors concluded that the birthmark could pose a significant danger to Luna in the future. The risk of skin cancer was high, and so doctors recommended several operations.

Carol really wanted to remove her daughter’s “Batman mask” – but at least six wearing surgeries would be needed. There was also another major problem: each surgery would cost around $40,000.

Luna’s distressed mom started searching high and low for treatment. Naturally, it wasn’t an easy time for the family.

“We saw a lot of doctors. We went to Boston, Chicago and New York trying to find a better result,” Carol said.

Carol aimed to have the surgery done before Luna started school, in order to avoid the possibility of her daughter being teased. Unfortunately, even at a young age, Luna and her family had to put up with comments from people who, for some reason, could not accept that she looked different.

Many parents in Carol’s situation might have hidden and avoided the public eye – but the brave mother decided to share Luna’s story and spread awareness about her daughter’s disease. She created an Instagram page where people could get an insight into the family’s everyday life.

As Luna’s story received international attention, doctors worldwide came to know about her. One such individual was a famous doctor in Russia.

After hearing about Luna’s particular situation, surgeon-oncologist Dr. Pavel Borisovich Popov contacted Carol and offered to perform a treatment not available in the United States.

But the treatment, called photodynamic therapy, was costly, and so the family asked the public for help. Luna’s family created a fundraiser to help with the costs, collecting $70,000 from people who wanted to help the little girl.

“Everybody thinks I’m crazy to go to Russia, but I have done a lot of research and gained advice from several doctors and I really think that this is the best option for Luna right now,” Carol told SWNS in 2019.

For the last couple of years, Carol and Luna have been traveling to Russia to run tests and start her treatment. Despite the pandemic, the family has been able to travel to the clinic in Krasnodar. Thankfully, all the operations to date have been successful.

What’s more, Dr. Pavel Borisovich Popov is more than happy with the result – he believes that the risk of Luna getting cancer has decreased drastically.

”We only had six operations to remove the nevus and have succeeded in making it disappear,” Dr. Popov told East2West News and continued:

”Luna has already started speaking and she says herself: ‘My black spot has gone. I am a princess’.”

According to Dr. Popov, the main medical part of the task is completed. But that does not mean that they can end Luna’s treatment completely.

“We are letting Luna rest from the treatment she has undergone and then we will undertake the aesthetic surgeries. Later we aim to make sure Luna will not have any complexes when she comes to the age where she is concerned about her appearance,” Dr. Popov explains.

Of course, it’s a relief for the family that everything is going in the right direction. Luna has proven to be a courageous girl who has taken on all treatments with a smile and an inspiring braveness.

Lunas’s two-year life to date has been a fight, but despite that, she has a smile for everyone she meets.

“I don’t regret at all having the treatment here. Luna doesn’t feel the pain. She dances a few hours after the surgery,” Carol says, according to The Daily Mail.

Today, the family is ready to show the world what Luna looks like now. Luna seems so happy and I think everyone can agree that there is a big difference … Bravo to her determined mom and the brilliant surgeons!

Looking at recent pictures of Luna, it’s safe to say that the results look fantastic! I’m so glad she was able to have the procedure, as people can be so mean.

Recently, the family flew to Brazil (Carol is an American citizen but originally from Brazil), to celebrate Christmas.

In Brazil, Luna will meet family members and recover before heading back to Russia for more treatments next year. I’m wishing this little princess nothing but love, health, and happiness!