Many would consider The Shining to be one of the best horror films ever made.

The Stanley Kubrick flick – based on an adaptation of a Stephen King novel – was released in 1980, starring Jack Nicholson.

Many facets of the film became legendary, and the actors who appeared in it earned a special place in cinema history. Not least the downright chilling twins, the “Grady Girls”, played by Lisa and Louise Burns.

They were only 12 years old when Kubrick cast them in the film, and weren’t actually supposed to have been in it at all.

In fact, their casting as the Grady Daughters was an accident; Kubrick never intended to use twin sisters at all.

So what happened to the Grady Girls? And what do they look like now? Here’s all you need to know. 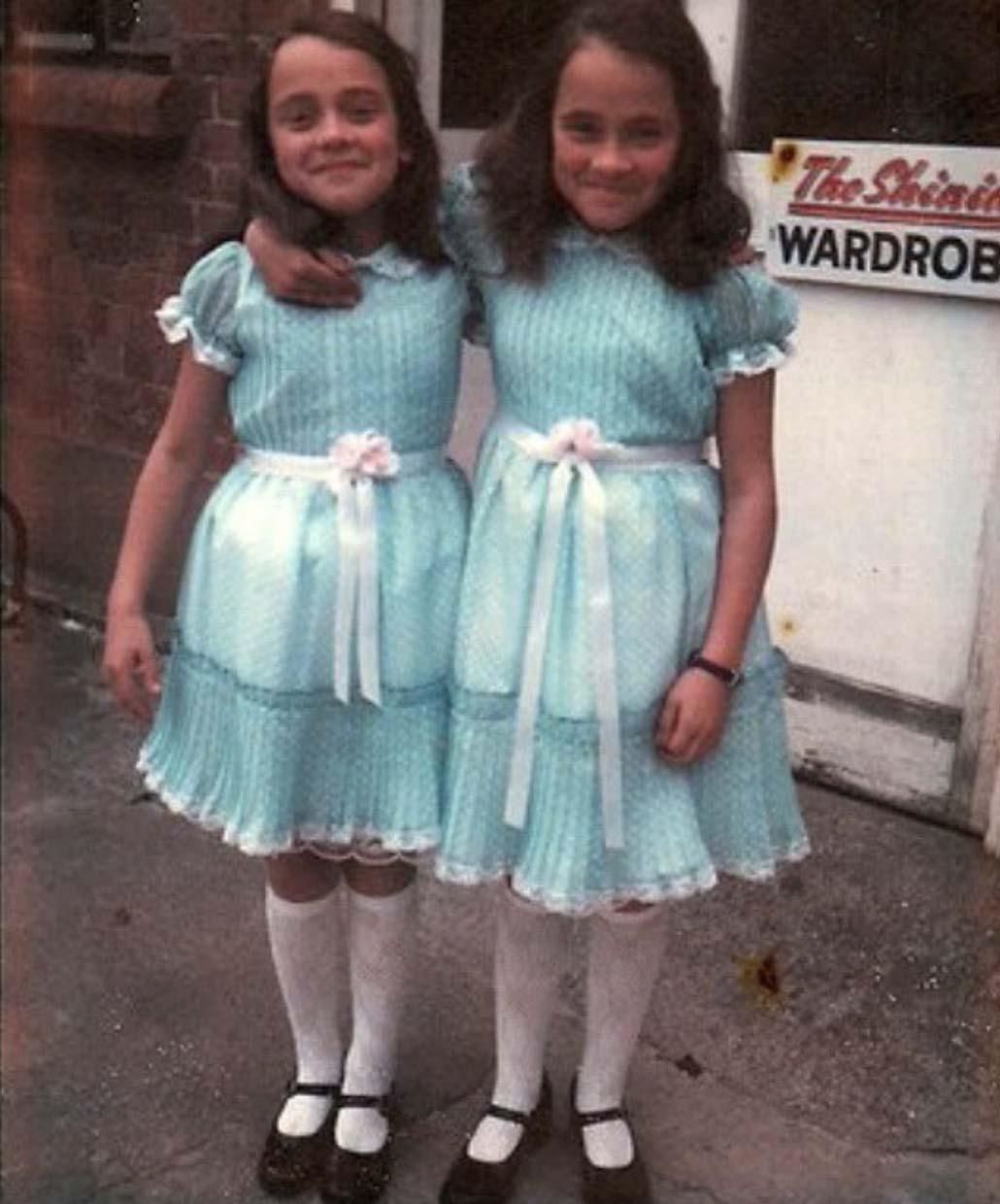 Being a child actor must be an extraordinary experience.

Not only because they get to be on a movie set for hours and hours (probably one of the best playgrounds a kid ever could dream of), but also because becoming an actor is an aspiration for many youngsters.

Now, being on a set differs significantly regarding what kind of movie or television series is filmed. For example, Mary-Kate and Ashley Olsen’s time on the set of Full House was probably much more light-hearted than that of children who star in horror films.

And when we speak of horror films, there are two sisters more closely associated with horror films than most children in movie history.

Lisa and Louise Burns were just 12 years of age when Stanley Kubrick cast them as the Grady Girls in his 1980 horror film The Shining.

It was a fantastic experience, and not long ago they revealed details of how it was to work with the likes of Jack Nicholson and director Kubrick.

Though they wanted to become actresses, they were turned away by The Royal Academy of Dramatic Art, in London. Instead, they went on to work in whole different fields altogether.

Here’s all you need to know about them – and what they look like today, at age 54. 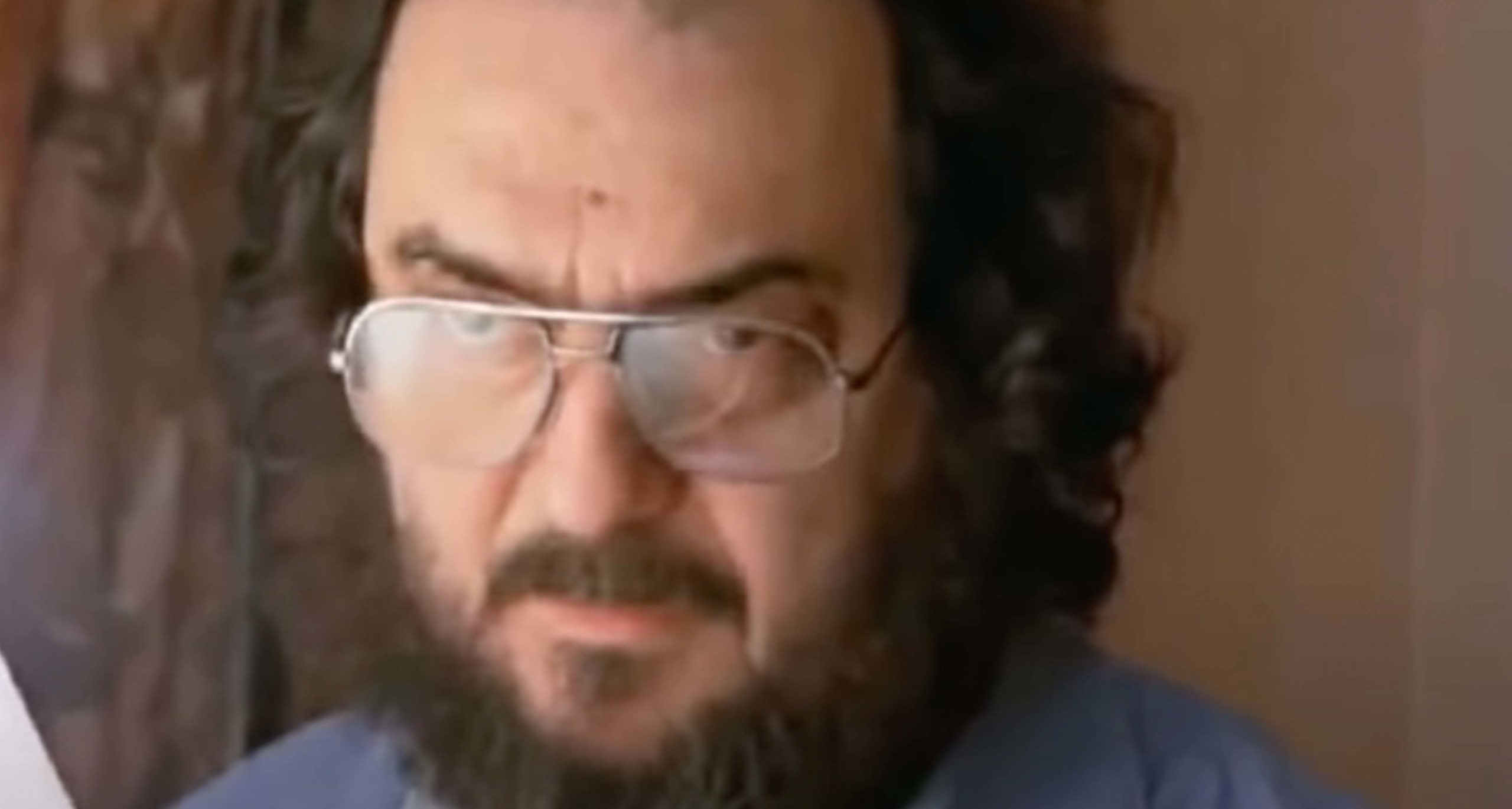 The Shining was released in 1980. Based on the Stephen King story of the same name, it was directed by the legendary Stanley Kubrick, and released in 1977.

How Stanley Kubrick created ‘The Shining’

“I’ve always been interested in ESP and the paranormal. In addition to the scientific experiments which have been conducted suggesting that we are just short of conclusive proof of its existence, I’m sure we’ve all had the experience of opening a book at the exact page we’re looking for, or thinking of a friend a moment before they ring on the telephone,” Stanley Kubrick explained in an interview about the film.

“But The Shining didn’t originate from any particular desire to do a film about this. The manuscript of the novel was sent to me by John Calley, of Warner Bros. I thought it was one of the most ingenious and exciting stories of the genre I had read,” he recalled.

From the beginning, Kubrick knew exactly who he wanted to star in the film. Jack Nicholson was one of the hottest actors in Hollywood at the time.

Alongside Spencer Tracy and Jimmy Cagney, Kubrick thought he was the greatest of stars.

Moreover, the legendary director – who also directed classics like 2001: A Space Odyssey, Full Metal Jacket, and A Clockwork Orange – felt he needed someone knowledgeable for the lead role. Jack Nicholson was it, and so landed the part of Jack Torrance. 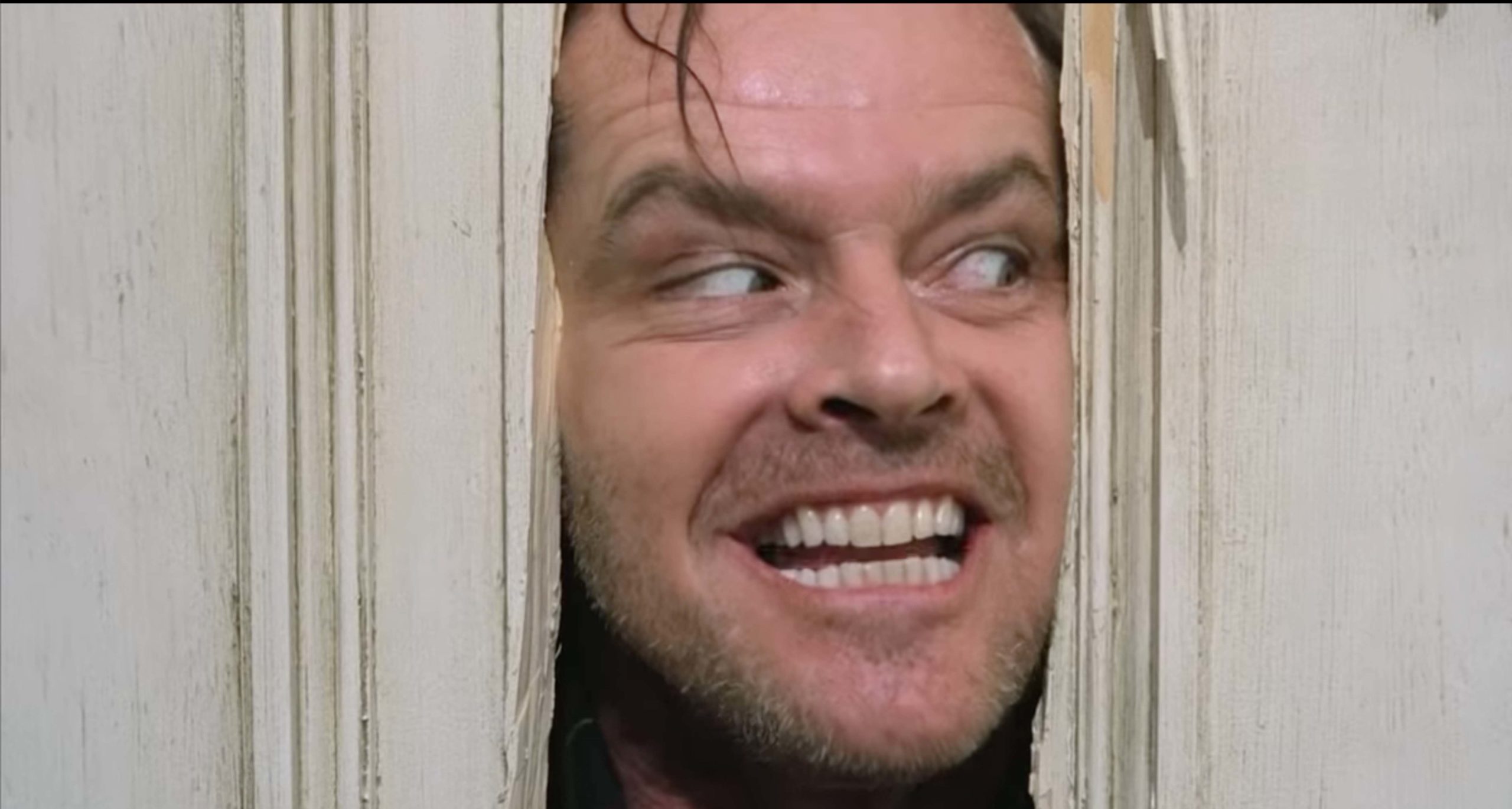 “His work is always interesting, clearly conceived and has the X-factor, magic. Jack is particularly suited for roles which require intelligence. He is an intelligent and literate man, and these are qualities almost impossible to act. In The Shining, you believe he’s a writer, failed or otherwise,” Kubrick explained.

Shelley Duvall starred as Wendy Torrance, while Danny Lloyd starred as the youngster Danny. In the story, the happy family-of-three head to the isolated Overlook Hotel in the Colorado Rockies for the winter.

However, a sinister presence steadily influences the father, turning him towards unimaginable violence.

At the same time, Danny begins to see horrific things from both the past and the future.

At one point in the movie, he is invited to come and play with the twins, the so-called Grady girls, played by Louise and Lisa Burns.

The twins from The Shining are pretty scary as you watch the film, holding hands and eerily staring down the hallway.

They wear dresses with ribbons around their waists and curls in their hair.

If you’ve seen the film, you’ll know what I’m talking about.

Before getting the parts in The Shining, Lisa and Louise Burns, from London, England, hadn’t done any acting.

It turns out that it was only by accident that they even got their parts in Kubrick’s film from the beginning.

Kubrick never intended to use twin sisters in the film at all, but changed his mind somewhere along the way.

“Stanley [Kubrick] was the kind of person who didn’t know what he was looking for until he found it,” Lisa Burns said in a 2014 interview with Daily Mail.

“We’d never been to stage school, but we had done some TV work before, and so we had an agent, and she called our mum and said, ‘Stanley Kubrick is looking for sisters.’” 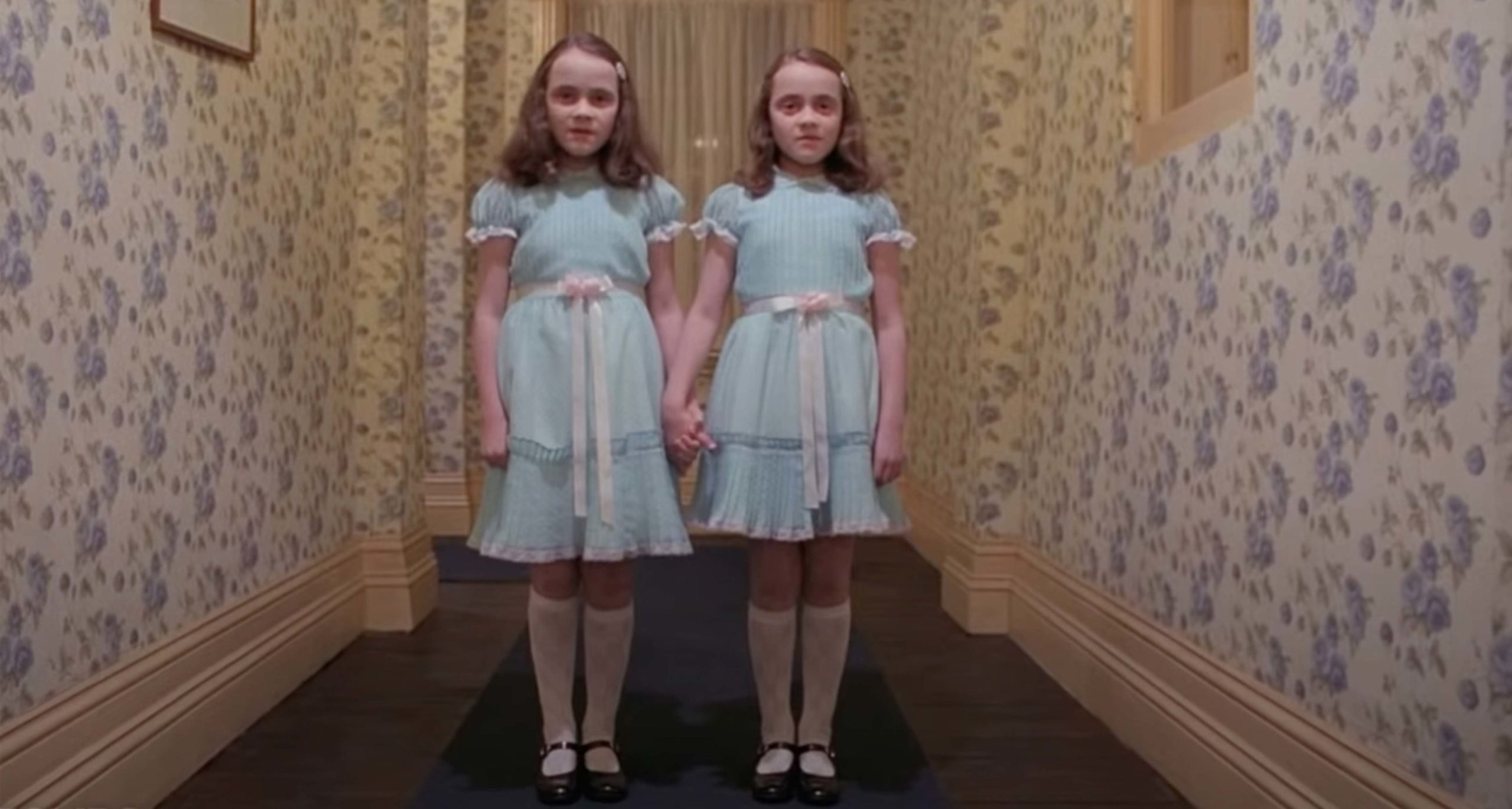 “Stanley was never looking for twins, but we went along anyway. If we hadn’t auditioned then the roles would probably have gone to two girls of different ages, like the characters in the book,” Lisa added. “It certainly worked in our favor because Stanley decided twins were just spookier.”

Spent a lot of time with Jack Nicholson on set

The image of Lisa and Louise standing in the hotel corridor and holding hands is one I’ll never forget. The now-legendary quote, “Come and play with us,” that they utter to young Danny is, meanwhile, iconic.

On set, Lisa and Louise Burns got to spend a lot of time with the rest of the crew, even though they only ended up being in the film for about 30 seconds.

Reminiscing about their time on the set of The Shining, the twins have many stories to tell.

Jack Nicholson – who created a crazy, magnificent character in Jack – was known for being sort of maniacal about his acting, pretty much transforming into his character even when the cameras weren’t rolling.

But Lisa and Louise Burns tell a whole different side to Nicholson. On set, he became a father figure and mentor for the young girls. In between scenes, he took naps on the floor to stay in character.

Now, Lisa and Louise had never experienced a movie set before. It was an exceptional place, of course. Mostly, The Shining was filmed at Elstree Studios in Hertfordshire, England. 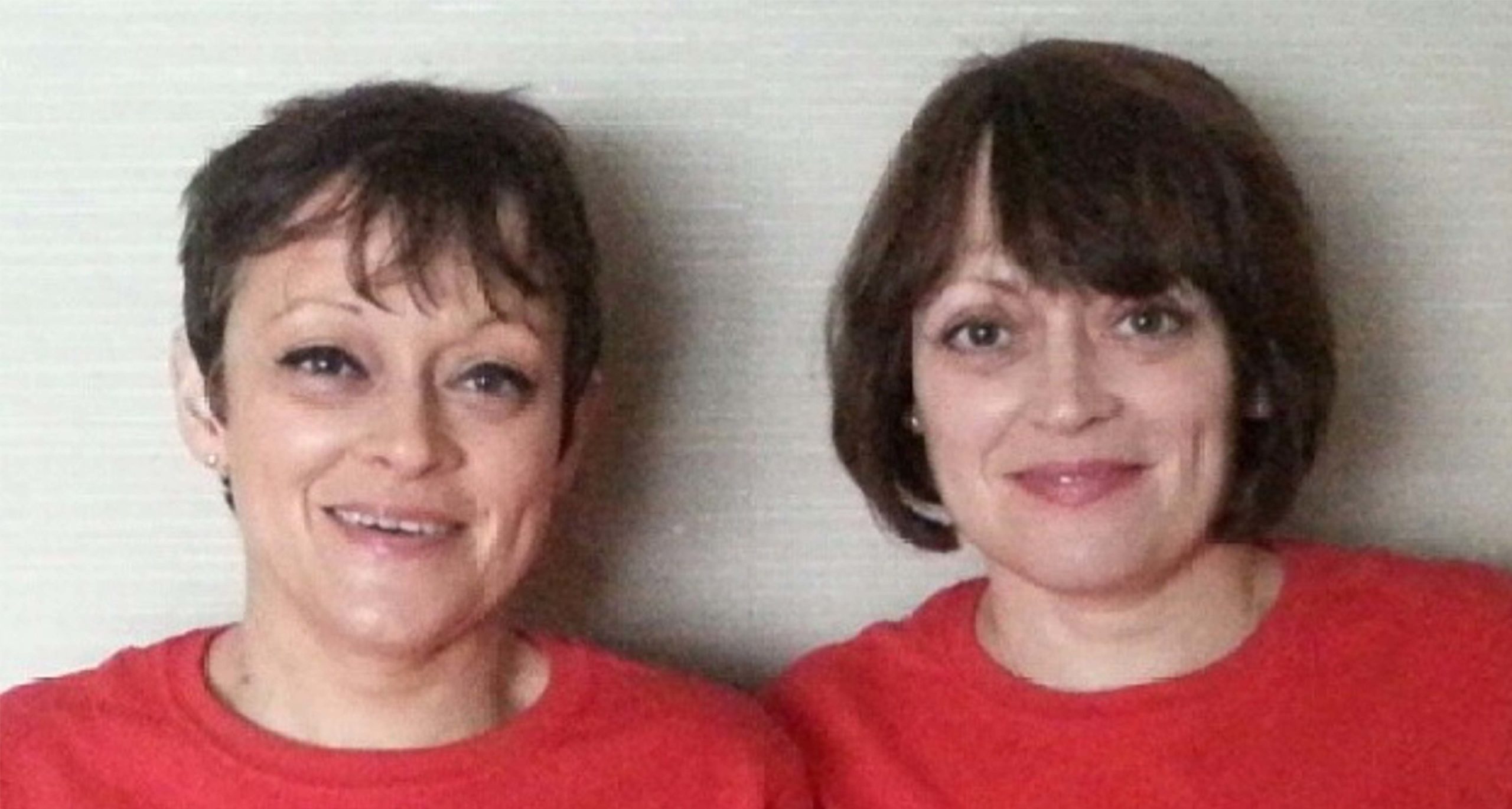 As mentioned, the Grady Girls weren’t in the film for all that long. However, Stanley Kubrick wanted the girls on set every day to play with the young boy, Danny, in between takes.

“He didn’t know it was a horror movie”

As the little boy was only five years of age when he was cast as the son of Jack Nicholson’s character in The Shining, director Stanley Kubrick took care to be very protective of him.

He decided not to tell young Danny what the movie was about, and the crew did their best to hide the fact that it was a horror film.

In one scene – where actress Shelley Duvall runs away screaming, with Danny in her arms – Lisa recalled how she instead carried a life-sized dummy.

This was so that Danny wouldn’t have to listen to her haunting screams.

“Danny was just a normal little boy and was a very sweet child. His parent’s worked on the railroad and it was his first acting job. We would play with him a lot, just like we would our own brother,” Lisa said.

“He had a lot more scenes than us, but it didn’t matter to us at all. We were very well entertained. He did a great job, but he never knew what the movie was really about, he didn’t know it was a horror movie at all.”

A post shared by The OFFICIAL Shining Twins (@the_shining_twins)

Lisa and Louise Burns’s legendary dresses from The Shining are still touring the world today. They had two sets of dresses each, and for the twins, appearing in the legendary horror film made them famous overnight.

Lisa and Louise Burns from ‘The Shining’ – today, work, pictures

Yet not everything was great about being in a film at such young ages. As mentioned, both Lisa and Louise were keen on becoming actresses, but since they already had starred in a movie, they were turned down by several acting schools.

The prestigious acting academy, The Royal Academy of Dramatic Art, in London, was amongst those to say no. This, especially for Louise, was a very tough blow.

“When I was younger it was a huge dream of mine to be a movie star like Judy Garland or Greta Garbo, real movie stars,” she said.

“I went to an audition for RADA and they said they couldn’t accept me because I’d been in the movie, that made me a professional actress and they didn’t accept professionals. The woman wouldn’t even audition me and that was a huge knock for me, so I decided to be a scientist instead.”

“It was hard to get seen because of that,” Lisa added. “We would probably have had more luck if we’d just lied.”

So what are Louise and Lisa Burns – the Grady Girls – doing today?

Well, Lisa became a lawyer, while Louise is working as a published scientist. 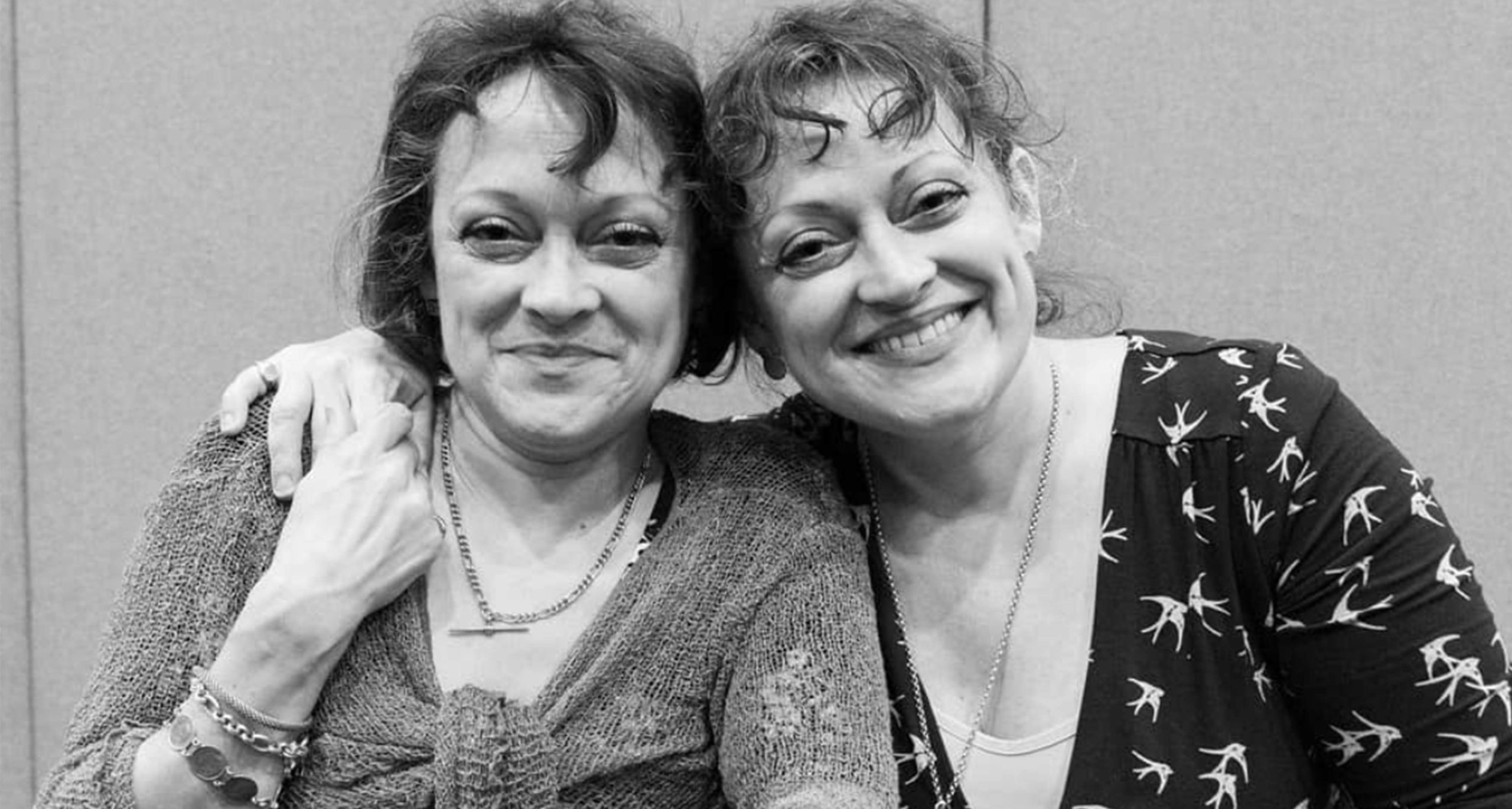 But even though their acting careers didn’t turn out the way they wanted – they will forever have a special place in the hearts of horror film enthusiasts.

“That kind of thing is an incredible compliment”

In fact, both sisters still today travel the world to meet fans at different conventions.

“We met a fan in Canada who had a tattoo of us on each leg,” Louise told Daily Mail.

“We’ve also met people who have us on either arm and then when they put their arms together we’re holding hands. To us, that kind of thing is an incredible compliment.”

One can still see great resemblances from when Louise and Lisa were young and acted in The Shining.