Danny DeVito and Rhea Perlman have now been married for almost 40 years. The couple started dating in 1971, and it’s safe to say the two have reached the upper echelons of celebrity status since then.

As actors, Danny and Rhea have both won several big awards, and have starred in some of the most popular television shows and films around. Yet though their marriage is still intact, they don’t live together.

DeVito Rhea Perlman separated in 2017 – this after breaking up and reuniting again some years before. So what happened? And why do the couple live apart if they’re still married?

Here’s all you need to know about them!

For the majority of people, meeting the love of their life is a dream. For some, it happens as early as high school. For others, it takes years and years of searching. Others still, sadly, never feel as though they’ve found ‘the one’.

Of course, when it happens is irrelevant. Saying that love has no age limit is a gross understatement. See, finding love is far less about how old or young you are and far more about being able to open up and share your heart with your significant other.

Most people celebrate their love through marriage. Now, while marriage is lovely for all involved, it’s also somewhat of a job, a task which requires support, effort and a willingness to transition and change.

Certain couples can make it work, can learn from one another and adapt over the years. Others, for a whole multitude of reasons, just can’t make it work, and as a result, divorce comes into play.

It should go without saying that in such cases, it’s crucial that both parties try their best to things on good terms wherever possible, especially if there are children involved.

That said, there are other, more modern solutions – divorce isn’t always the answer when things don’t work out like they should. Just take a look at the relationship between Danny DeVito and his wife, Rhea Perlman.

The award-winning actors have been married for almost four decades, though haven’t lived together for the last few years. Yet even though the couple are technically separated, DeVito and Perlman don’t have any plans to divorce.

So just why is that?

Here’s all you need to know about Danny and Rhea’s heartwarming love story! 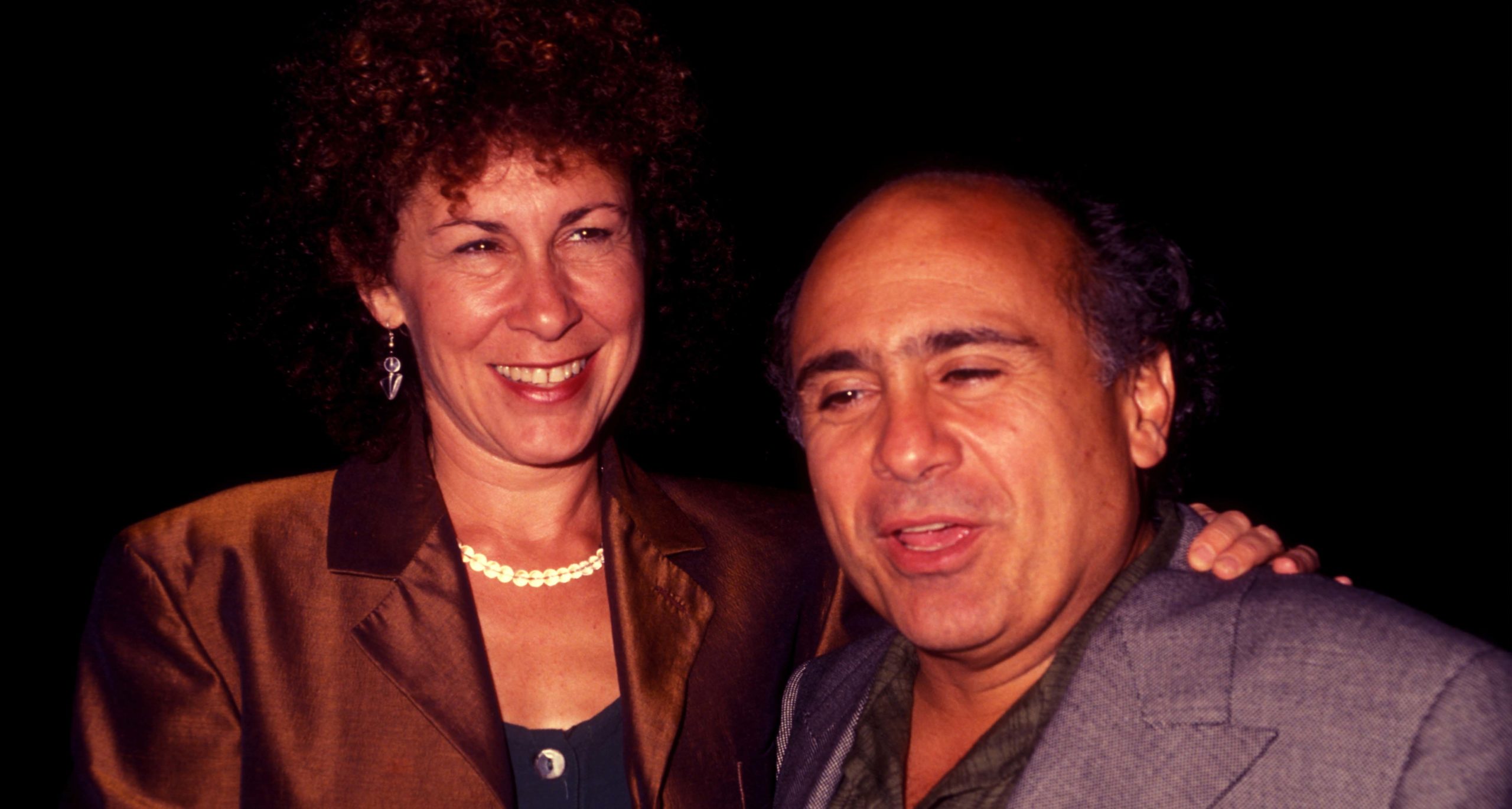 DeVito and Perlman both grew up on the east coast. Danny was born in 1944 in Neptune, New Jersey, while Rhea was welcomed to the world four years later in Brooklyn, New York.

Growing up, DeVito was teased because of his height.

“I was plagued; I couldn’t slow-dance with the girls I wanted to because my face would be in a spot where I might be thought of as moving too fast,” he told Far Out Magazine.

As a teenager, DeVito starred in several school plays as a teenager, but didn’t believe that a career in acting was possible despite the fact it was what he wanted. As for Rhea Perlman, she also harbored hopes of a future career in acting. Even as minors, the two had things in common.

Rhea knew she wanted to leave Brooklyn, and eventually moved to Manhattan to attend Hunter College, where she majored in drama.

For DeVito, the road to professional acting is perhaps best described as a kiss from lady luck herself.

He had worked at his sister’s hair salon for two years before taking makeup classes at the American Academy of Dramatic Arts in New York. Only, there was a caveat to attending those classes … regardless of what course you were studying at the Academy, you had to perform a monologue.

Low and behold, the teachers were so impressed by DeVito that they suggested that he switch to start acting classes instead. In 1966, he graduated from the American Academy. 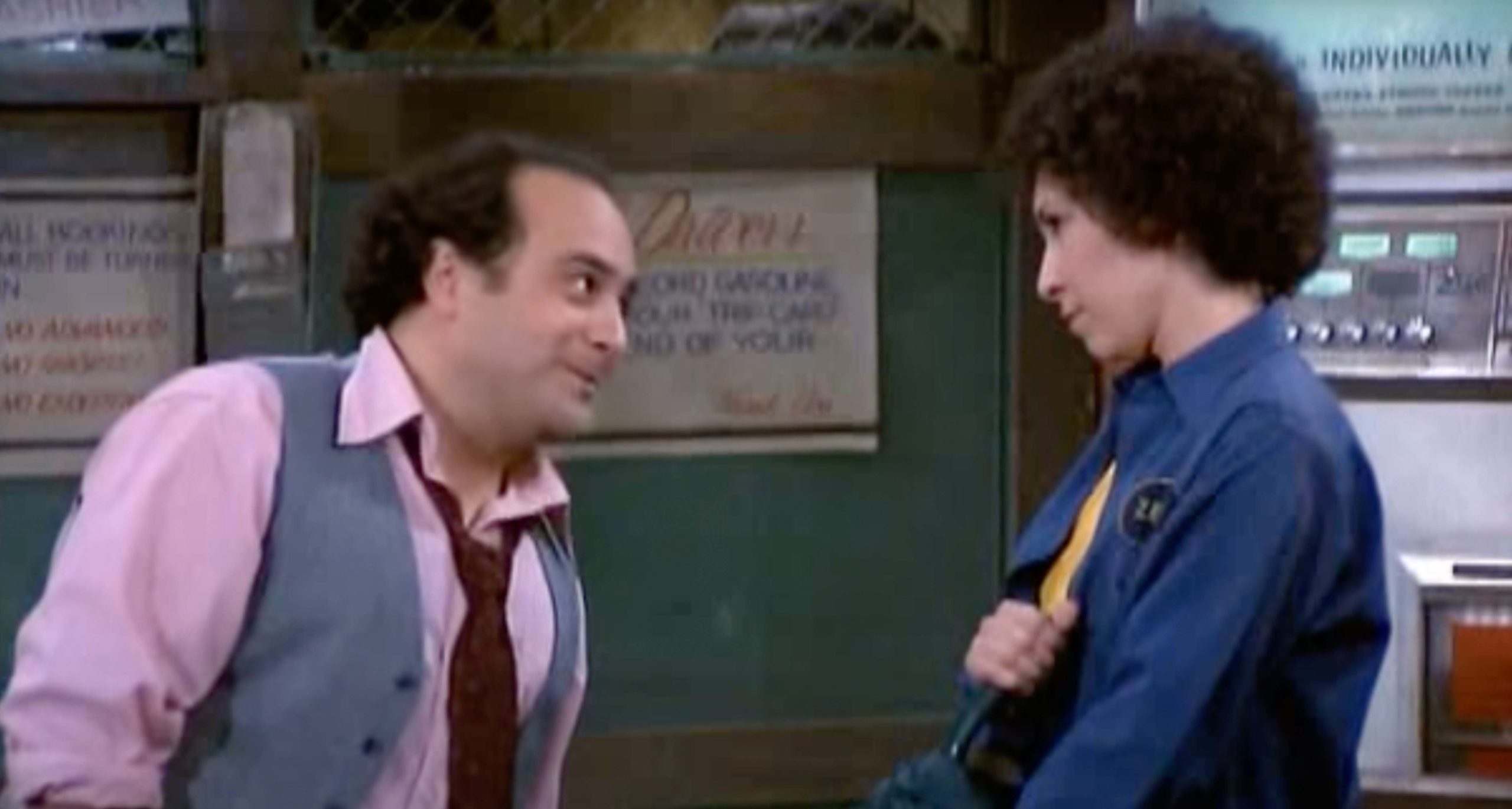 Thus did both Rhea Perlman and Danny DeVito start working as actors. Rhea stayed on the east coast doing Off-Broadway plays, while Danny tried his luck in Hollywood. Needless to say, things didn’t end up quite as he thought they would.

Met at an Off-Broadway play

“I worked as a car parker, and I hung around the Sunset Strip with all the flower children,” he recalled. “I had long hair, and I wore a raincoat and sneakers, and I fit right in. But I wanted to act.”

In the end, DeVito decided to return to New York City and work in Off-Broadway plays. Then, in 1970, Rhea and Danny’s paths crossed for the first time.

One night, Rhea and her friend went to see an Off-Broadway play Danny DeVito happened to be starring in. He played the role of a demented stable boy who could only speak in monosyllables. For her part, Rhea found it very attractive.

“He sang a song that didn’t make any sense at all,” Rhea told The Daily Times in 1983. “It was like a mating call. I knew I had to meet him if he wasn’t married. So we arranged a date.”

Rhea and Danny DeVito went out after the show, and immediately hit it off.

“She was vibrant, with a great sense of humor, and real warm,” Danny added. 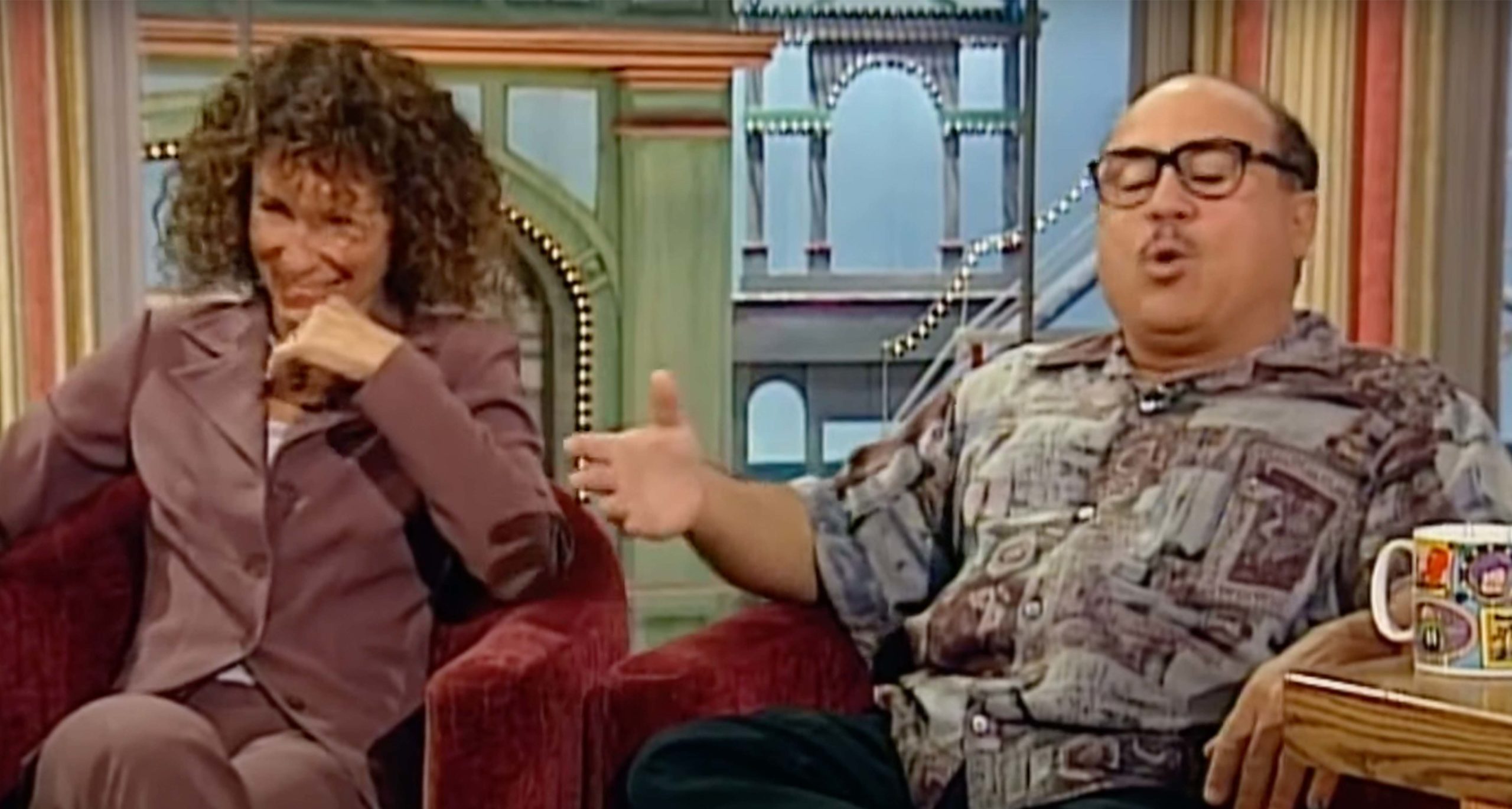 So Rhea moved in with Danny in his Manhattan studio two weeks later. As one might imagine, space wasn’t at a premium.

“He slept on the floor, and roaches would line up at attention around him. It’s like he was training them,” Rhea recalled. “He made a Super-8 short, following a roach around.”

Around the same time the two lovebirds began their long love story, both Perlman and DeVito’s respective careers were going off. In 1975, Danny starred in the now-legendary film One Flew Over the Cuckoo’s Nest alongside Jack Nicholson. Three years later, he got his big breakthrough as the short-fused dispatcher Louie De Palma in the television series Taxi.

DeVito won a Golden Globe in 1980 for Best Actor in a Supporting Role – Television Series, as well as an Emmy for Outstanding Supporting Actor in a Comedy or Comedy-Variety or Music Series in 1981.

As fate would have it, Rhea proceeded to lay claim to her own success. After starring in several television movies in the 1970s, and acting alongside Danny DeVito in some Taxi episodes, she landed her big breakthrough in 1982 after she was cast in the television series Cheers as waitress Carla Tortelli.

For 11 years, Rhea stayed on the show, appearing in a total of 270 episodes. She became a fan favorite and received significant recognition along with the role. She won four Primetime Emmys for Outstanding Supporting Actress in a Comedy Series, received six additional nominations, and five Golden Globe nominations. 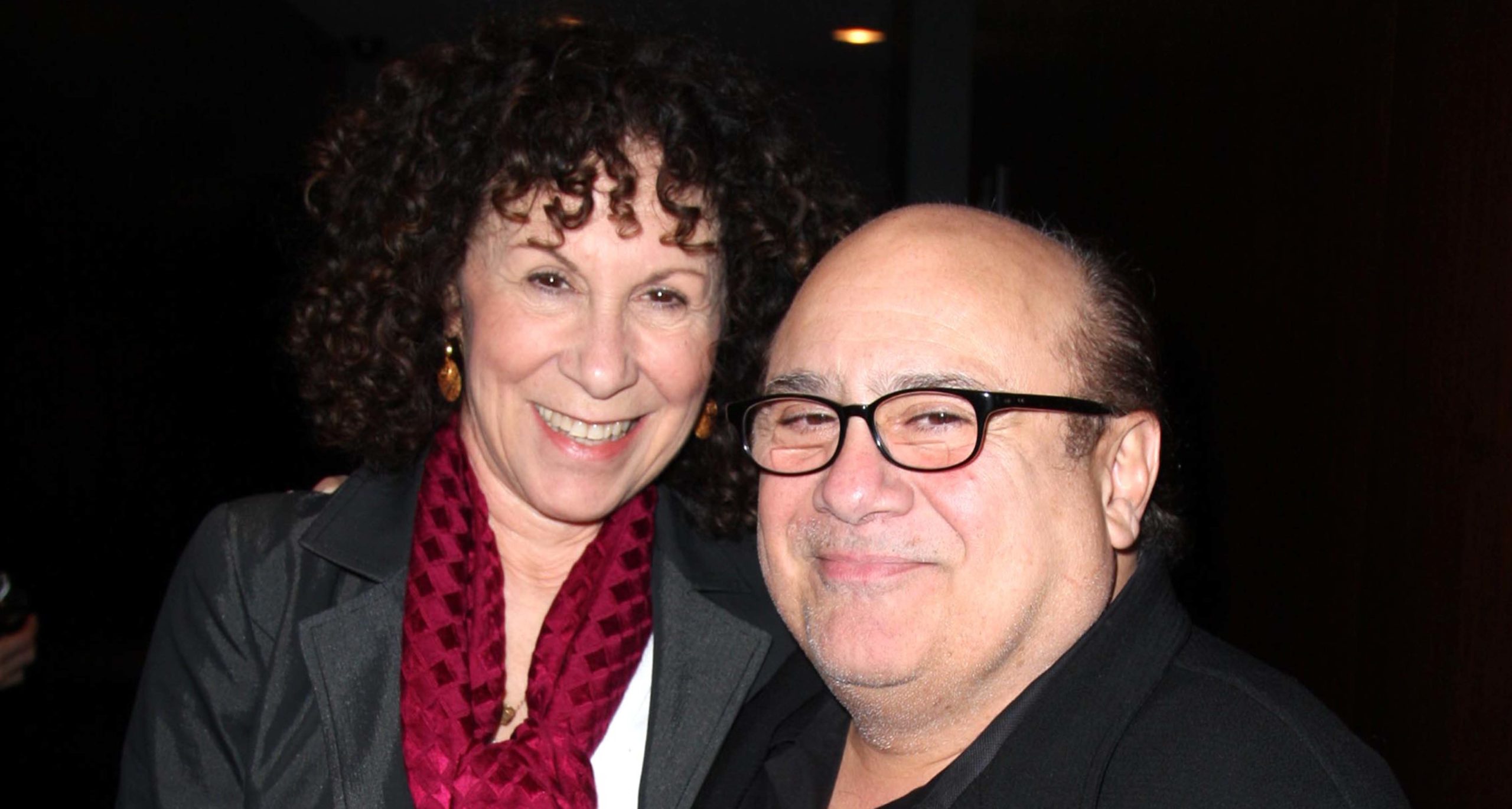 One year after being cast in Cheers, Rhea and Danny announced that they were expecting their first child. This, naturally, meant her announcing that her character, Carla, was also expecting.

“While we were waiting to see if NBC was going to put Cheers on the schedule, Danny and I talked about having a baby,” she told The Daily Times.

“By the third or fourth episode, I broke the news to [the producers]. Since I’d already talked to them, I felt I had a note from the teacher. When I was six months pregnant, I wasn’t showing too much, so I had to wear a pillow.”

1982 was a big year for Rhea and Danny, with the couple tying the knot on January 28. Two months later, on March 12, their daughter Lucy Devito was born. She was followed by Grace DeVito in 1985, two further years after which, Rhea and Danny completed their family with the birth of their son, Jake DeVito.

As for their marriage, Danny admitted that it hadn’t altered their relationship at all.

“After you’ve lived with somebody for 11 years, what’s a guy in a robe reading from a book going to change,” he said.

The couple went on to star together as Mr. and Mrs. Wormwood in the 1996 film Matilda, which Danny also produced.

The two have since had great careers in the film business. Moreover, Rhea and Danny started their own production company, Jersey Films, which has put out films such as Pulp Fiction and Erin Brockovich. DeVito starred in the latter, bagging himself an Academy Award nomination for Best Picture. 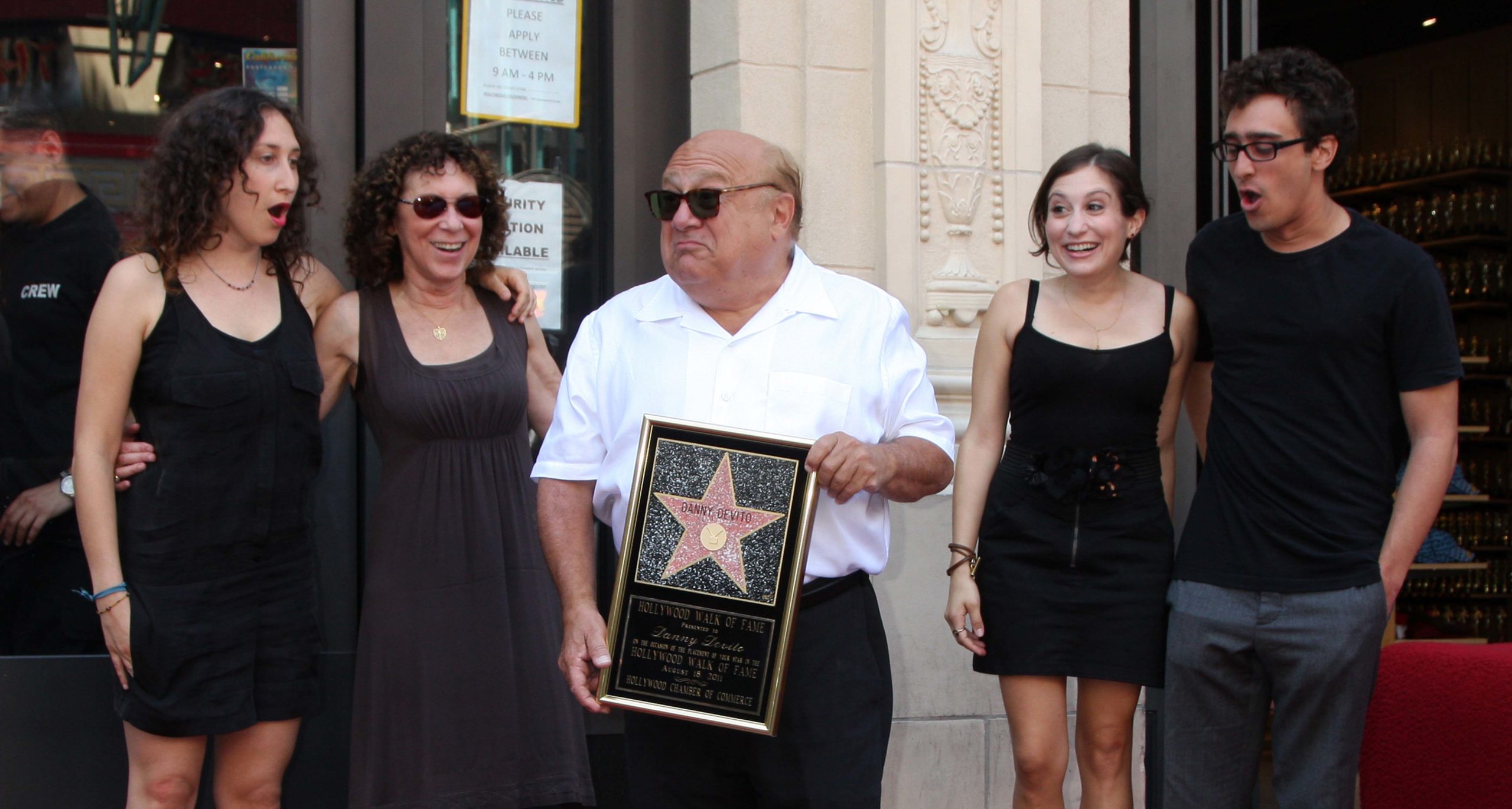 Though Rhea and Danny shared many wonderful years, it’s safe to say their marriage has had its fair shares of ups and downs.

In 2012, the couple announced that they were splitting up. Then, just one year later, they reconciled.

At the time of their brief reconciliation, it was reported that Rhea and Danny’s mutual friend, actor Michael Douglas, with whom DeVito shared a bachelor flat, was involved in getting the two back together.

“Michael loves Rhea, and he told Danny he will never find another woman quite like her,” a source told Radar Online.

“He said he should do whatever it takes to win Rhea back and come to his senses fast before it is too late. It’s because of Michael they are talking to each other.” 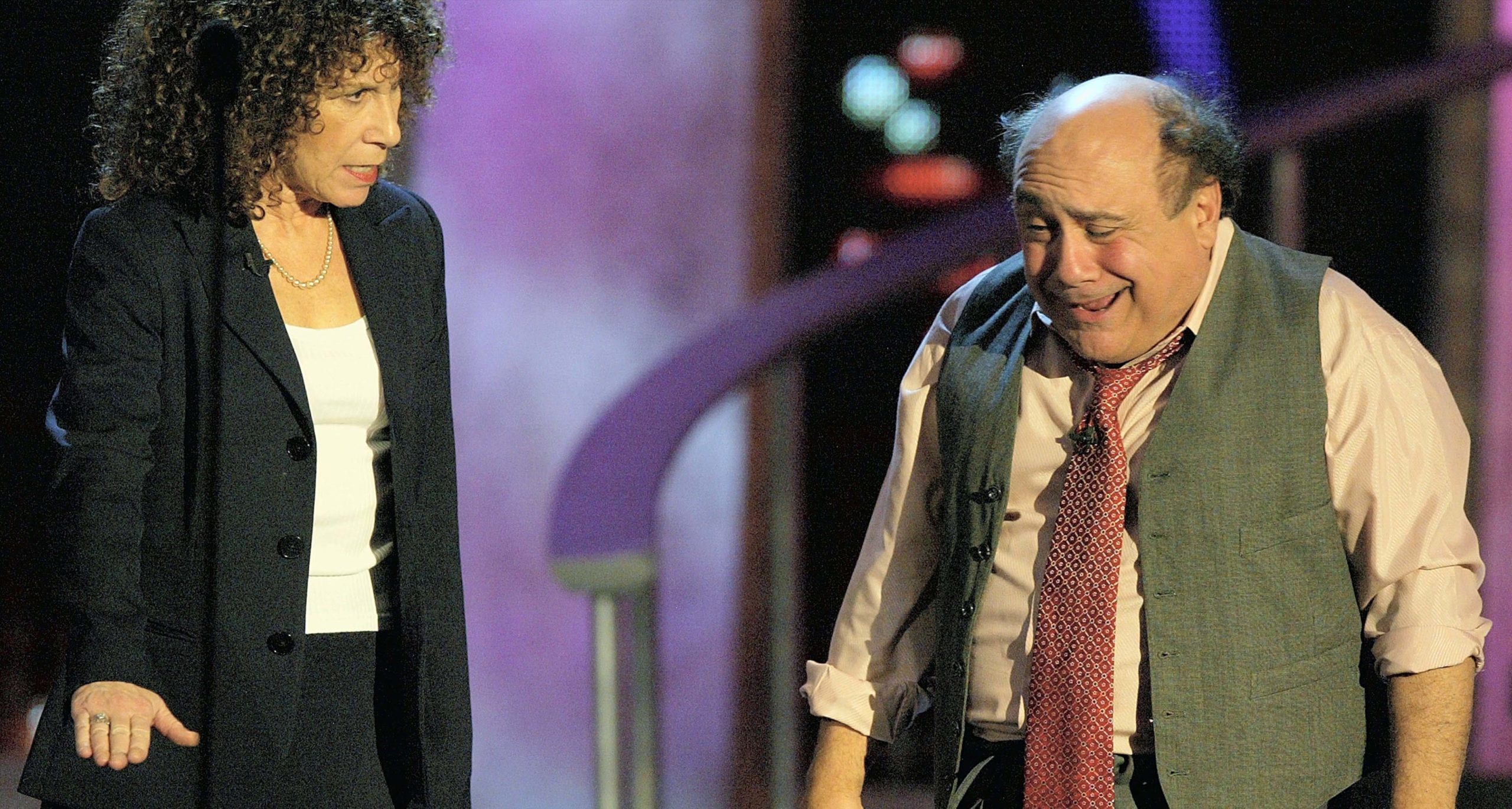 Five years later, in 2018, Rhea and Danny decided to permanently split, a representative for the couple announced. The two haven’t publicly clarified the real reason behind it, and they are still married to this day.

Why Danny DeVito and Rhea Perlman decided to stay married

While they have no plans on getting back together, Rhea has explained that they will never get a divorce.

“You know, we were together for 40 years. Forty years is a long time. You might have to do something else!” Rhea Perlman said on Watch What Happens Live with Andy Cohen in 2019.

“I’m not getting divorced. No, no, no. What for? We do live separately. We see each other a lot too.”

It turns out that Rhea and Danny have no trouble being friends instead of partners. Rhea told Cohen that their relationship was better now than it had been for the last five years of their marriage.

“I don’t know why it’s difficult for other people, but Danny and I have always loved each other, and we have three amazing children together,” Perlman said. “We really agree on almost everything important.”

“[Our relationship] is much better because all of the tense stuff is gone. It’s not in your face; I’m not in his, he’s not in mine,” she added.

In March of 2002, Danny also spoke on their relationship briefly with People.

Danny DeVito and Rhea Perlman enjoyed 40 wonderful years together. Though they aren’t living together today, we are truly happy that they still are great friends, and can be there for each other every day.