Patricia Krentcil went viral in 2012 after being charged with child endangerment. Readers may in fact know her better by another name, “Tan Mom,” as she was obsessed with going to the tanning salon and spending time in the booth five days a week.

Eventually, the controversial phenomenon called tanerexia – where one doesn’t realize or accept just how much color they have – almost took Patricia’s life. Now, she’s doing much better, though she still goes to the salon.

Over the last ten years, “Tan Mom” has been through a lot. Here’s what she looks like today! 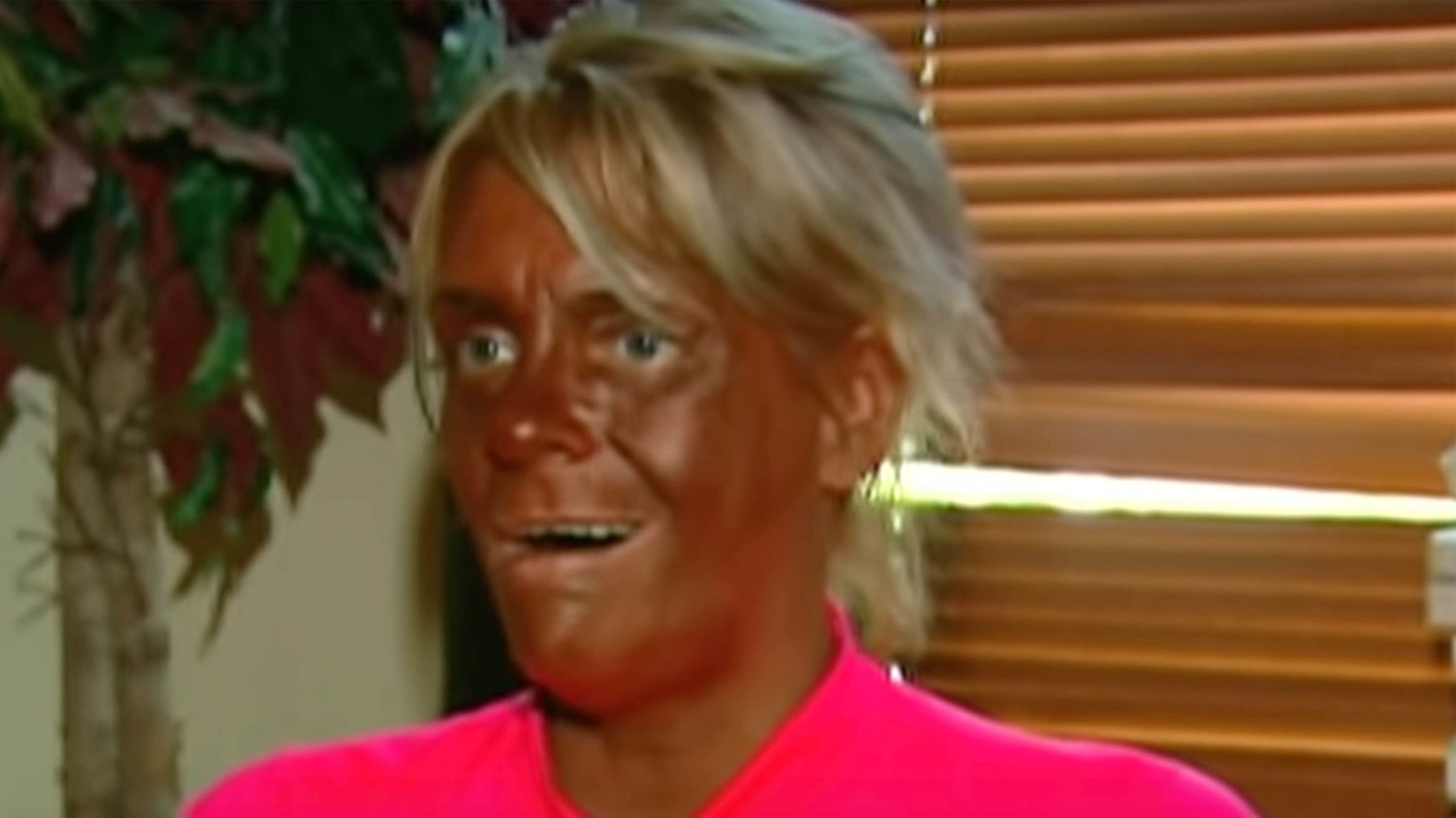 Being obsessed with anything – be it food, shopping, watching television series, or anything else – is rarely a good habit to develop.

Some things are, of course, worse for your health than others, but in the end, it’s essential to be aware what sort of impact an obsession can have on one’s life in the long run.

If you ever feel like something is beginning to take over your life, or that you are prioritizing an obsession over other important things in your everyday life, it’s probably a good idea to see someone. Try talking to a friend, or seeking help through counseling.

For Patricia Krentcil, her obsession took her to viral fame. When she was younger, she started to engage in tanning, and it quickly became a big part of her life. In 2012, Patricia became a phenomenon on the internet after she stood trial for taking her daughter with her to the tanning salon. She was never convicted, but her name was now out there.

Today, she takes a healthier approach to tanning, but her time in the tanning booth has greatly affected her life and appearance.

Patricia’s tanning obsession began when she was just 23 years old. The New Jersey woman was – according to the owner of City Tropics tanning salon in Nutley, New Jersey – averaging five visits a week for a maximum session of 12 minutes. She had an unlimited monthly plan of $100.

“I’ve been tanning my whole life, going to the beach, tanning salons and so forth,” she said.

Now, it wasn’t the fact that she was tanning that first made her an internet sensation. In 2012, her face was all over the internet for a whole different reason.

In May 2012, Krentcil faced criminal charges of child endangerment. As reported by CBS New York, police said she had put her 6-year-old daughter in a stand-up tanning booth, leaving the child with burns.

Patricia, though, said it all was a big misunderstanding. She insisted she would never bring her daughter, Anna, to the salon.

But the Nutley Police Department arrested and charged Krentcil with child endangerment. Authorities alleged that she had taken Anna with her to the tanning salon, and that the child had suffered a slight burn.

According to ABC, New Jersey law didn’t permit anyone younger than 14 to use a tanning facility. Teens older than 14 were allowed to go to salons, but only with parental consent.

In Anna’s case, the controversy began when a school nurse happened to ask Anna how she had gotten burned, to which the girl answered: “I go tanning with mommy.” Patricia, though, claimed that Anna had been burned after playing outside in their backyard.

“There’s not room… I would never permit it… It didn’t happen,” Krentcil said.

“She’s 6 years old. Yes, she does go tanning with mommy, but not in the booth,” she added. “The whole thing’s preposterous!” 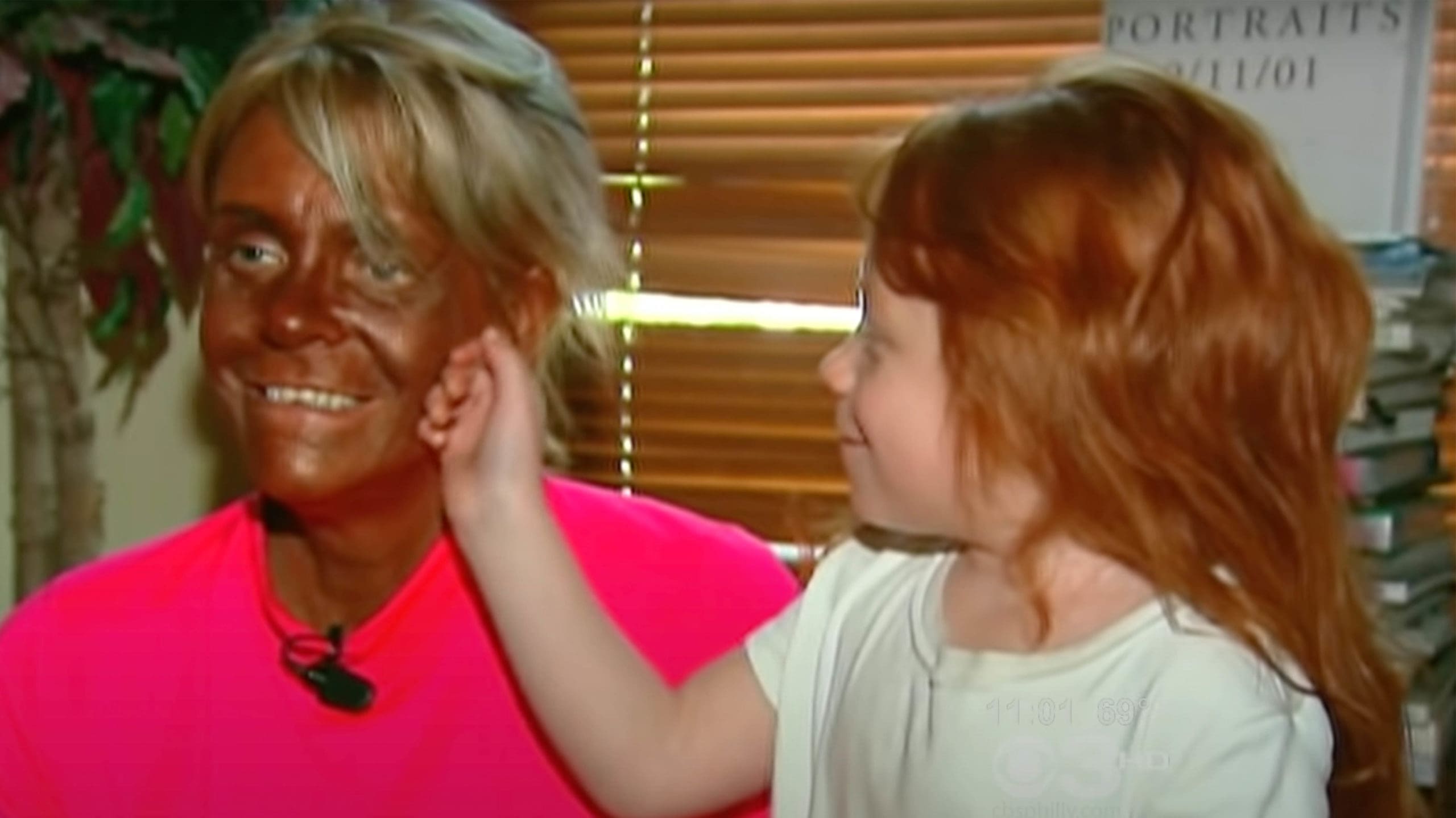 At that point, Patricia got the nickname “Tan Mom” in the media. The alleged incident went viral online, and Patricia’s face was shown on news broadcasts and in newspapers all over the world.

“They just don’t realize just how much color they have”

Not only that, but it shed light on the controversial phenomenon called tanorexia, a condition where a person becomes dependent and obsessed with tanning.

“When you look at this, this is somebody who has a problem which most likely has a condition called tanerexia, where they just don’t realize just how much color they have,” New York dermatologist Doris Day told ABC News.

“There’s really no excuse to take a young child to a tanning salon,” she added.

“We often consider going to a tanning salon the equivalent of smoking for the skin and the younger you start, those effects are cumulative.”

Health experts agreed that Patricia’s case was very extreme. In fact, it was one of the wildest cases Dermatologist Dr. Joshua Zeichner had seen.

“In all my years of treating patients as a dermatologist, I have never encountered anything like this,” Zeichner told the NY Daily News.

“Going to a tanning salon 20 times a month, frankly, is insane, especially with all of the public education and awareness campaigns on the dangers of tanning beds and skin cancers.” 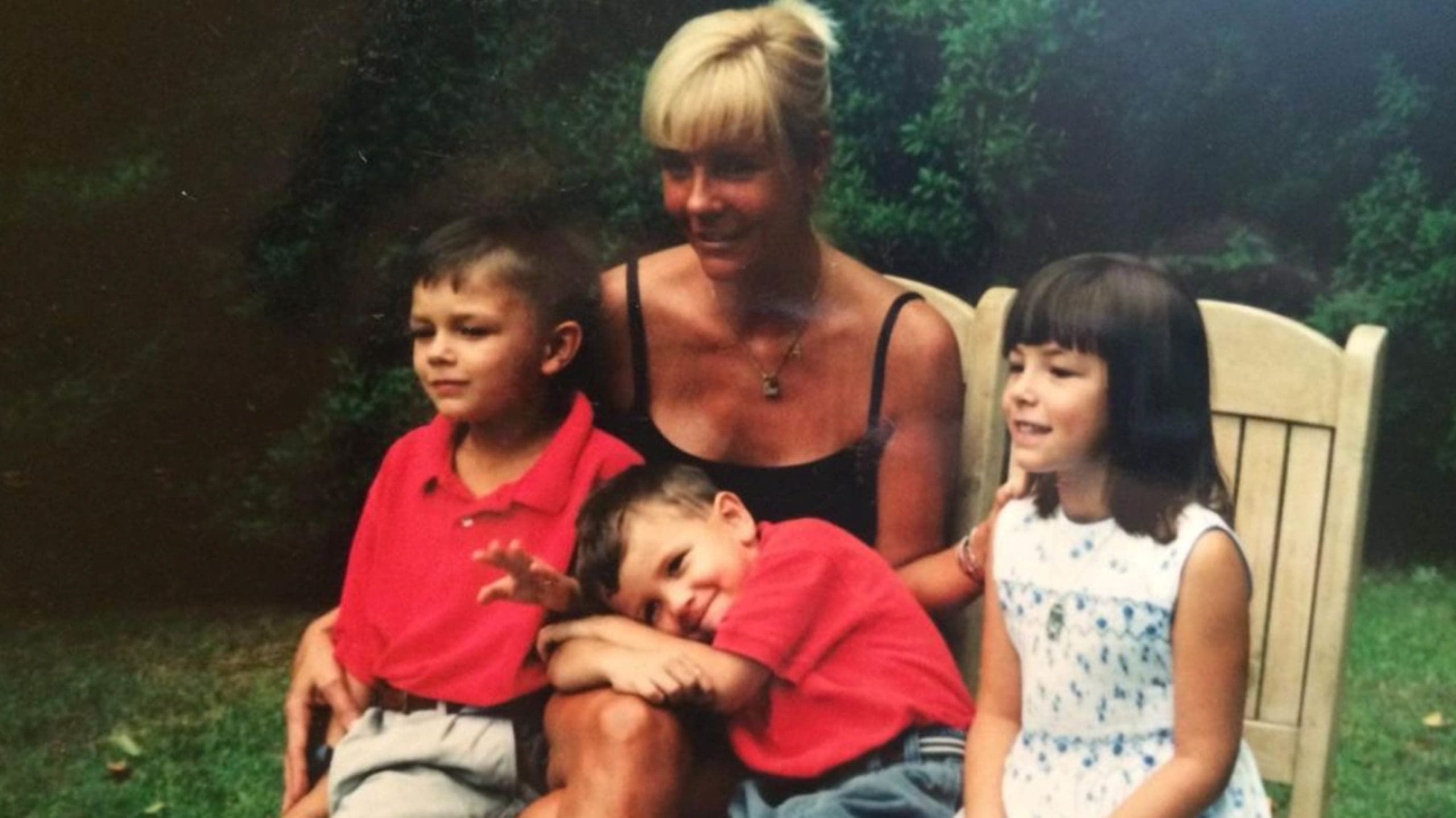 “It may be she has an [obsession with] tanning, which actually now has a name – tanorexia. She may need help to treat not only the damage to her skin but also what is going on with her psychologically,” he added.

‘Tan Mom’ faced up to 10 years in prison

Dr. Zeichner said that Patricia suffers from body dysmorphic disorder, wherein one is constantly left unhappy with their own appearance.

“Patients like this are constantly having elective cosmetic procedures – either surgeries, laser treatments or Botox and fillers,” he explained. “Which also includes those who are addicted to tan skin.”

Even though “Tan Mom” was released on $25,000 bail, Patricia faced up to 10 years in prison if she was convicted.

“She never went in,” Patricia maintained of her daughter in 2012. “It was beautiful out, and they went into the kiddie pool. She’s a redhead. She got sunburnt.”

She also insisted that tanning was her own, harmless activity, and that it doesn’t affect anyone but herself. 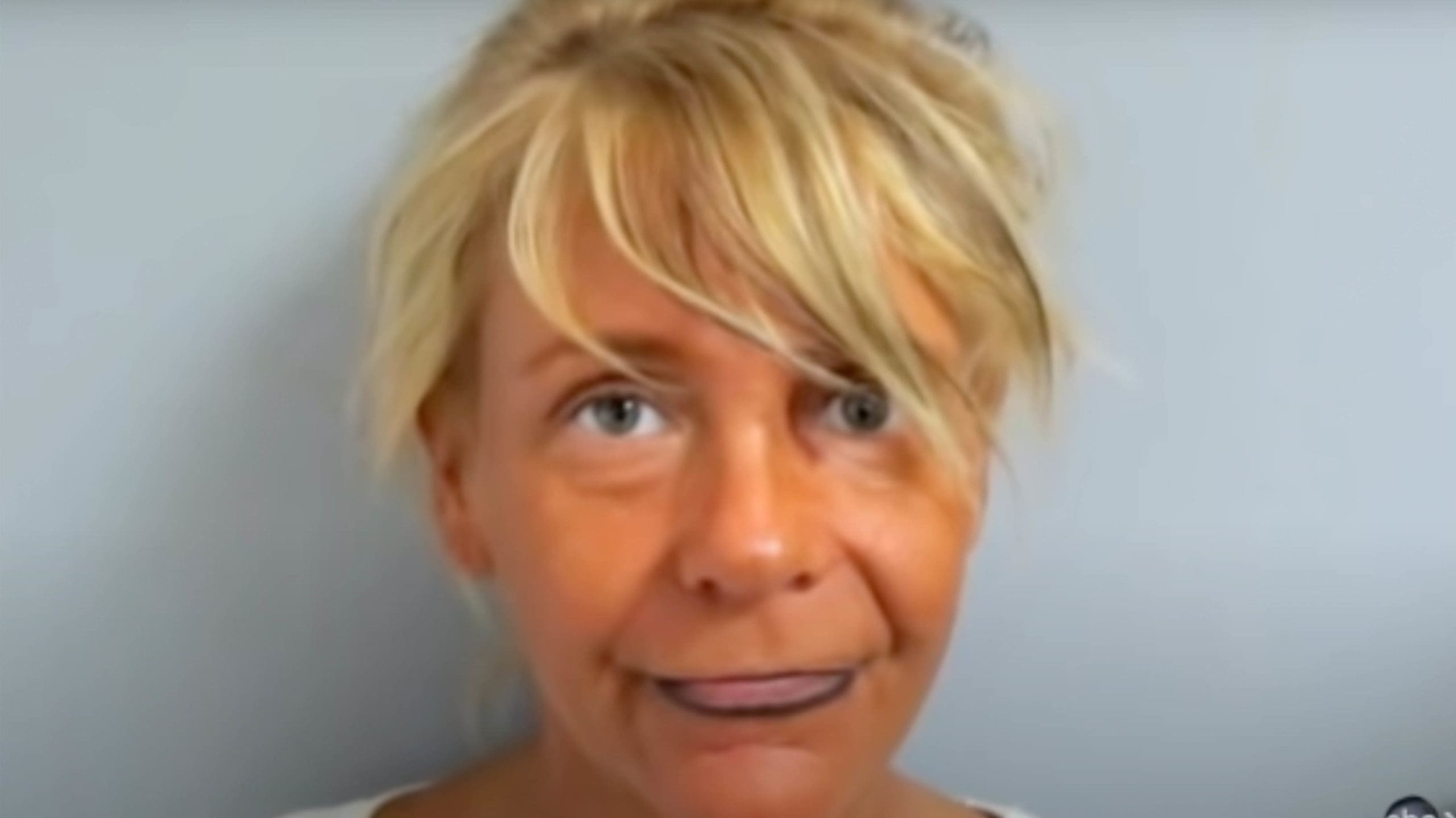 “If this was such a problem, why wasn’t this said years ago?”

Cleared of charges – moved to Florida

In February 2013, Patricia was cleared of child endangerment. Prosecutors said that a grand jury refused to indict her.

But though she was technically off the hook, mothers around the country continued to criticize her parenting. Patricia responded by calling them fat and ugly.

“There’s somebody out there for my whole life that doesn’t like me because they are jealous, fat and they’re ugly,” the mom said, according to the Daily Mail.

“Look in the mirror and look at yourself instead of looking at me. I’m sorry I’m tan. I like to be tan. It just feels good. But I really that think these moms … need to step off and step away.”

The mother-of-five was a viral sensation, though her fame became a nightmare. Media and paparazzi followed her around, and she was mocked by Kim Kardashian and a sketch on Saturday Night Live.

Ultimately, it became too much. She started drinking, and the family decided to relocate to Tampa, Florida, to get a fresh start. 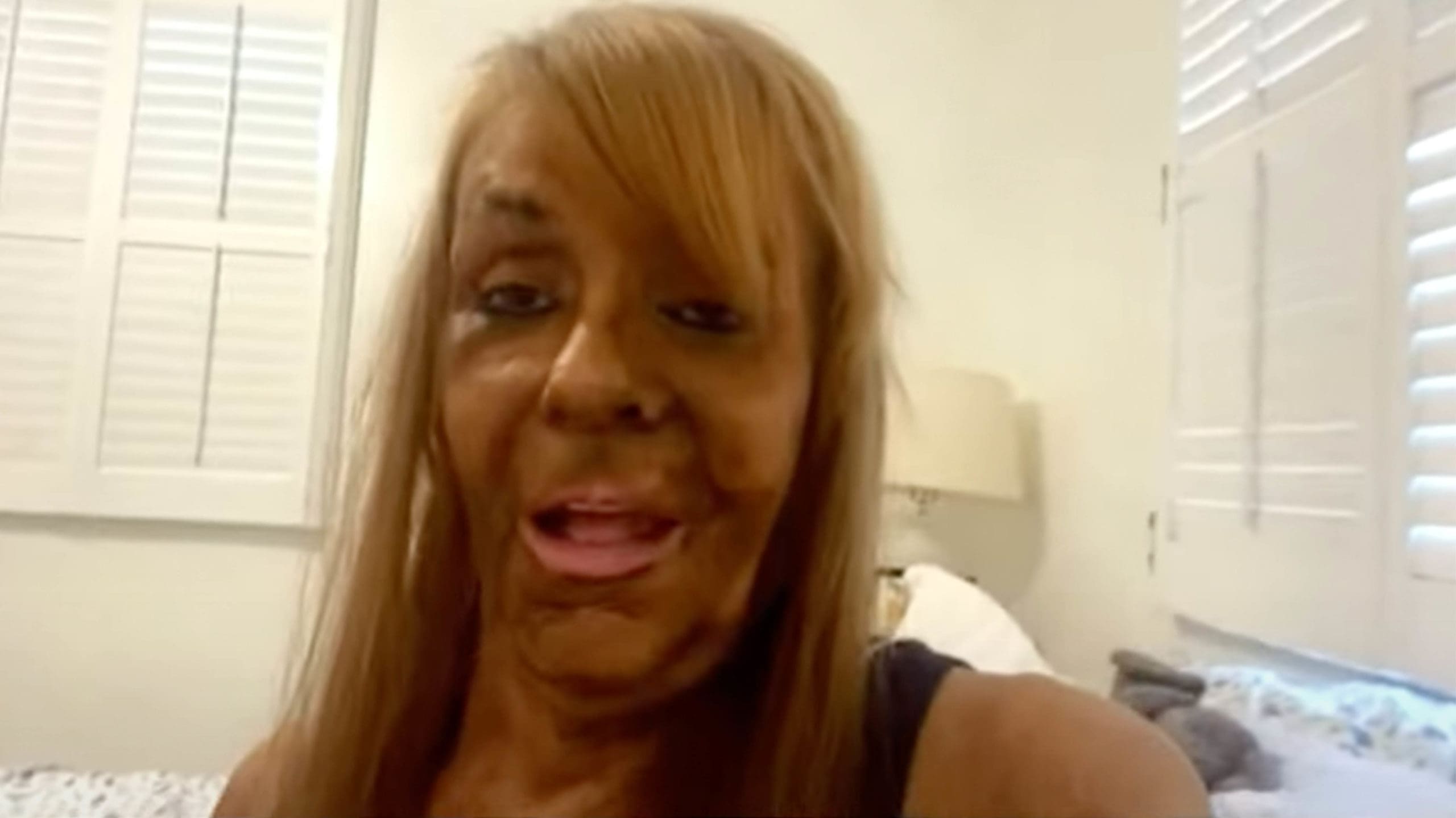 Moreover, Patricia Krentcil said that her then-teenage children Ashley, 18, Alec, 17, and Austin, 15, were “badgered at school” after the incident.

‘Tan Mom’ wanted to cash in on her fame

A year after the charges were dropped, Patricia “Tan Mom” Krentcil decided she wanted in on her own story.

She told In Touch magazine that she planned on starring in a movie to “portray everything that’s happened.” As she had thousands of dollars in legal bills to pay – and with her husband Rich out of work – she wanted to cash in on her newfound fame.

Besides the film, Patricia hoped to start her own tanning lotion line named “Real Tan Mom Healthy Glow,” as well as write a book. She also claimed that she had been overwhelmed with modeling jobs in New York, London, and Paris.

“‘It’s not even near being over,” she said about her moment in the spotlight. “Everyone wants me. I have a lot of other opportunities, so I’m just trying to figure out where to move my family.”

According to Patricia’s friend Adam Barta – through a statement to US Weekly – she was in critical condition due to complications from pneumonia. The whole family relocated to Florida to be at her side.

“Currently, she is still on life support (via the intubator) and in a medically induced sleep until her heart are lungs are strong enough to handle functioning on their own,” Barta told US Weekly.

“The fluid is draining from her lungs and she is improving today but she is definitely not out of the woods.”

This is ‘Tan Mom’ today – pictures

“They are feeding her very strong antibiotics to kill the infection as well so her system is taking quite a hit. I personally believe last night was the most critical turning point, and she made it so she will only continue to get better. The current plan is to try to extubate and revive her tomorrow or Tuesday, provided she maintains this trajectory,” he added.

It was later revealed that Patricia had suffered cardiac arrest, and was diagnosed with pneumonia, pancreatitis, and an infection that spread to her lungs.

Luckily, Patricia pulled through, and today she seems to be doing better than ever. Photos from her Instagram show her smiling and happy, though the scars from her tanning days are easy to see. 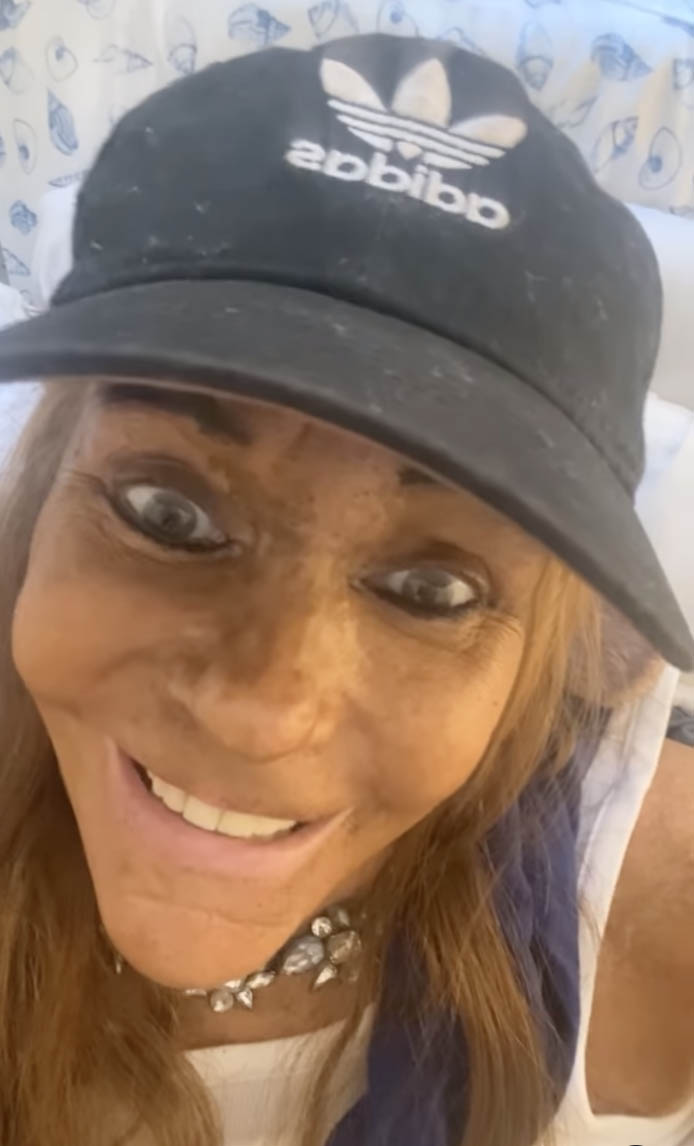 In April 2021, she spoke to the NY Post about her past, saying that the incident regarding her daughter and the tanning salon isn’t anything she dwells. Instead of trying to hide, she today embraces her “Tan Mom” identity.

She also said that she still tans twice a week in her own tanning bed.

What do you think about this story? Do you think tanning salons should be legal, or should they all be shut down? Give us your opinion in the comment section.