Some actors will forever be associated with a particular role, and regardless of what they have done later in life, some can never escape the specific role that made them famous.

But actress Kim McGuire? Well, for me, she will always be Mona “Hatchet-Face” Malnorowski from the musical movie Cry-Baby. 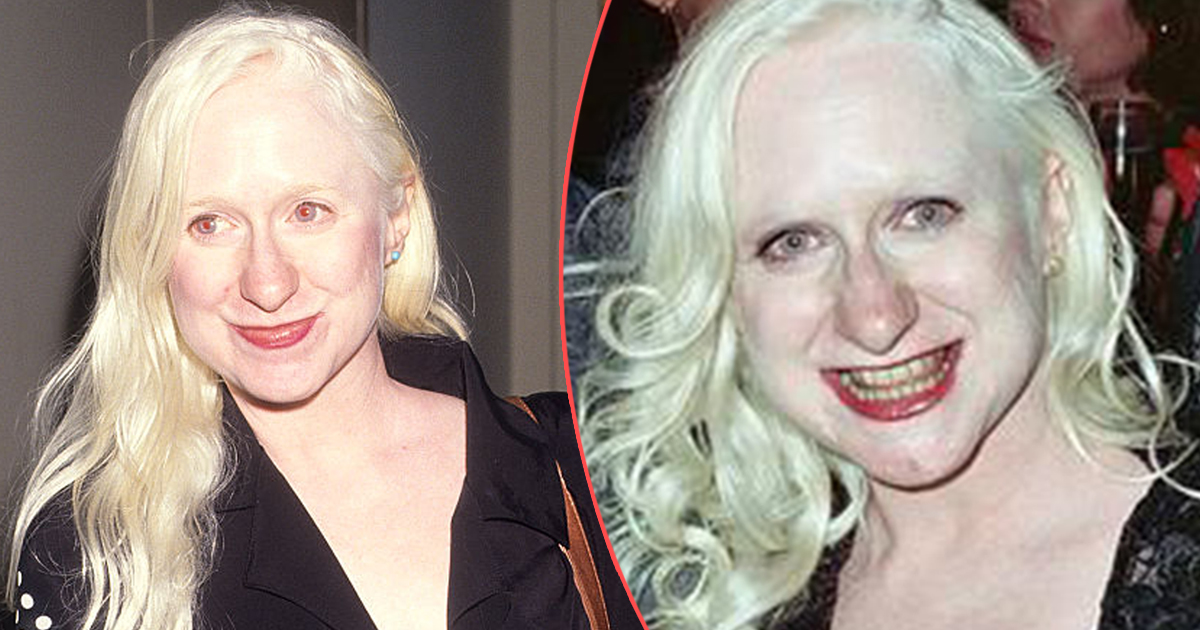 The cult classic premiered in 1990 and made Kim McGuire a Hollywood star overnight – but only 6 years later, her flame had gone out and Kim disappeared completely.

So what really happened to her? It turns out that the truth about Kim is quite tragic – she lost everything, became homeless, and was scarred forever due to some very sad circumstances. 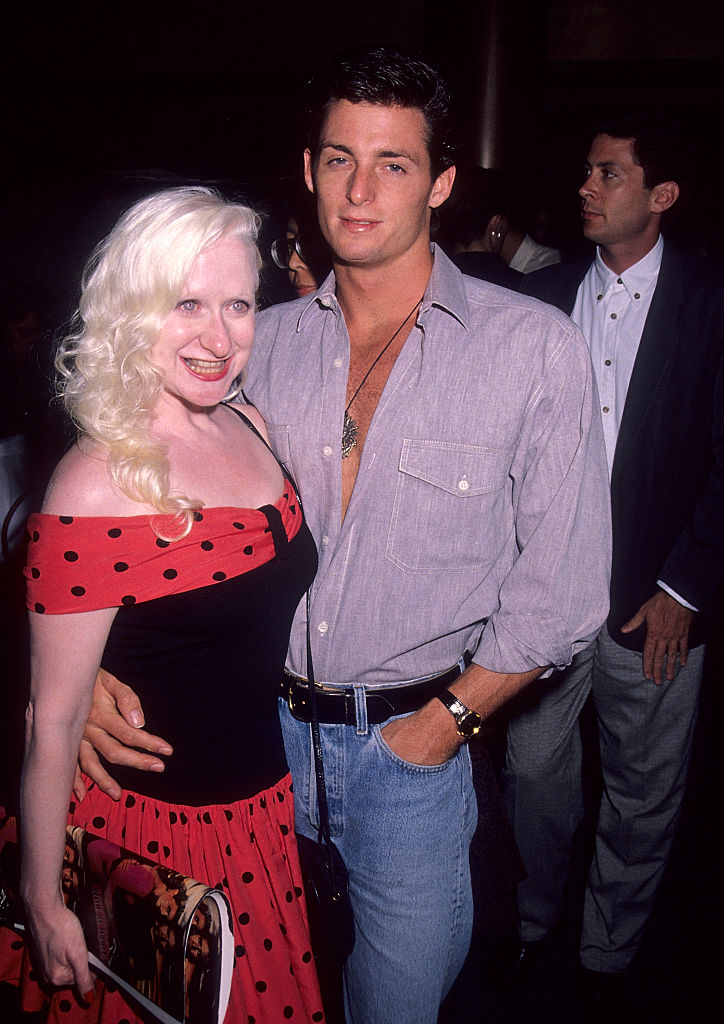 Kim Diane McGuire was born on December 1, 1955, in New Orleans, Louisana. Her father worked as a lawyer, and at first, it seemed that Kim would follow in her father’s footsteps.

However, after attending high school in New Orleans, Kim wanted to pursue a career in dance. Therefore, she attended the University of New Orleans and got a master’s degree in theater and dance. 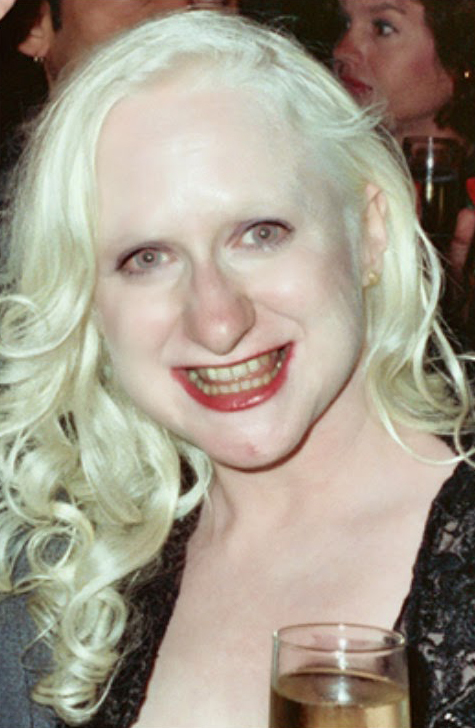 But the legacy from her father was strong, and Kim was also interested in the legal profession. So, she also went to Loyola Law School and became a lawyer.

But it was in the entertainment industry that Kim would excel. She had “a joyous spirit and was always happy,” making people laugh and feel special.

At the University of New Orleans, Kim developed her acting skills, and she performed in many of the theatre department’s productions. In 1989, Kim left New Orleans to work on stage in New York City. 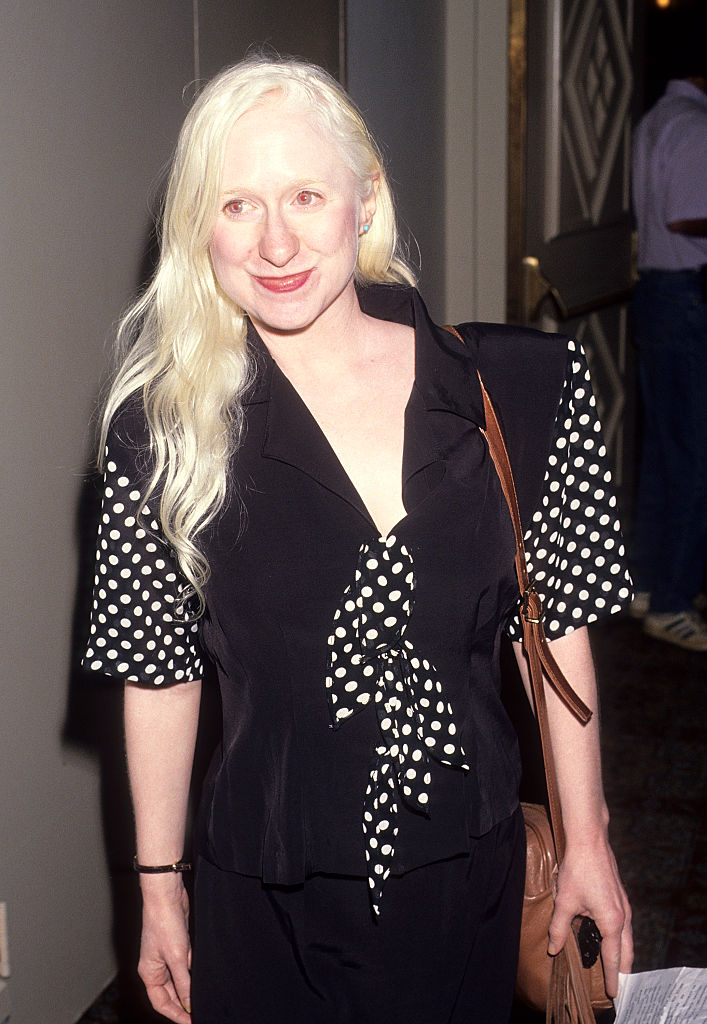 Already in 1985, John Walters had started working on a script for a film he called “Hatchet-Face.” The film was about a “woman and her multilevel beauty problems.” However, the film never got produced, but John Walters’s character would live on. So when he started planning for Cry-Baby, Walters wanted a similar character in the cast.

It has been speculated that Mona “Hatchet-Face” Malnorowski was actually meant to be portrayed by Harris Glenn Milstead, better known by his stage name Divine. The American actor, singer, and drag queen had previously had several roles in Walter’s movies. But Milstead died suddenly in March 1988, a year before the filming of Cry-Baby began.

For those of you who don’t know, Cry-Baby is a teen musical romantic comedy film that takes place in Baltimore in the 1950s. The movie centers around a gorgeous middle-class girl, Allison, who defies her family and jealous boyfriend when she starts dating motorcycle gang leader Wade “Cry-Baby” Walker, played by Johnny Depp.

Walters had a clear picture of what he was looking for when casting for the movie. According to him, “Hatchet-Face” would have ”the body of Jayne Mansfield and the face of Margaret Hamilton … [and] nobody, but nobody, gives her grief. “ 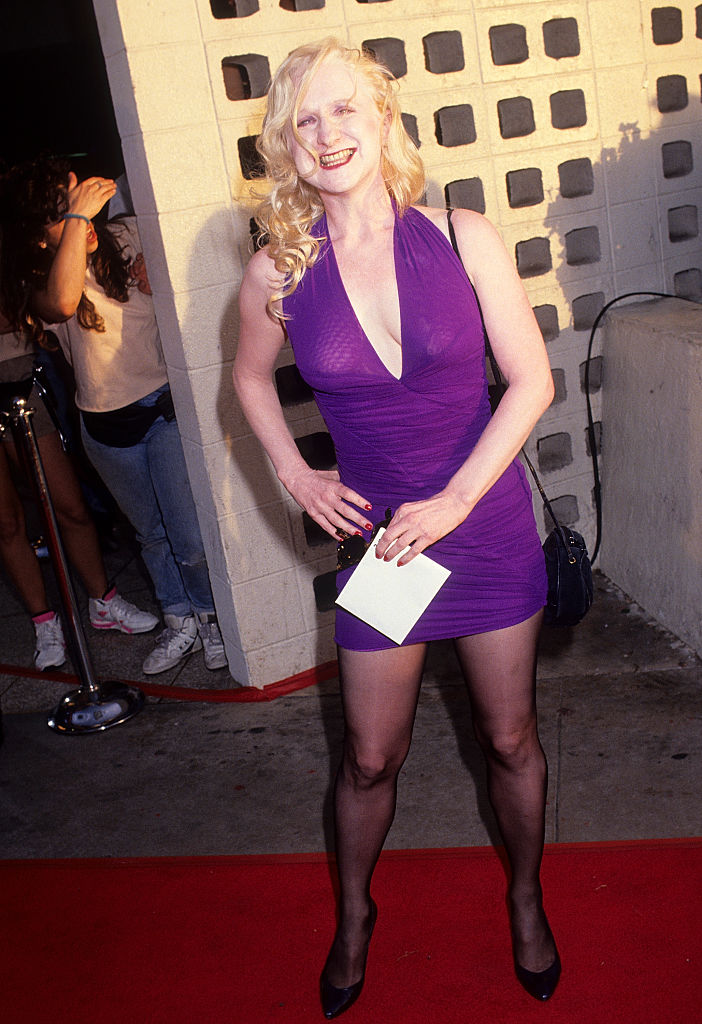 The ad to find “Hatchet-Face” stood out and probably raised some eyebrows. It read: “Wanted: Girl with a good body and an alarming face who is proud of it.”

The candidates were asked to send a card of their own to Cry-Baby productions. Kim McGuire grabbed the chance immediately.

I had just randomly sent my picture to six casting directors that week. I sent it to [casting director] Paula Herold, who was casting for a film called Reversal of Fortune, which I had no idea what it was about. And I guess I had a reversal of fortune, because they called me in for Cry-Baby,” Kim said in It Came From Baltimore, a special feature on the director’s cut DVD of Cry Baby.

“This has been my dream since I was 3. I started off as a dancer and said I wanted to make myself as triple-threat as possible, and do Chekhov and Shakespeare… I just think it’s so magical. I hate to say it, but I’ve always wanted to be a star.”

For Kim, the role would change her forever and earn her a spot in film history. The unique look she sported in the movie left the audience with a memorable impression.

Kim already had a rather eye-catching look, but her naturally unusual facial features were greatly exaggerated in Cry-Baby. It got to the point that Kim became unrecognizable. 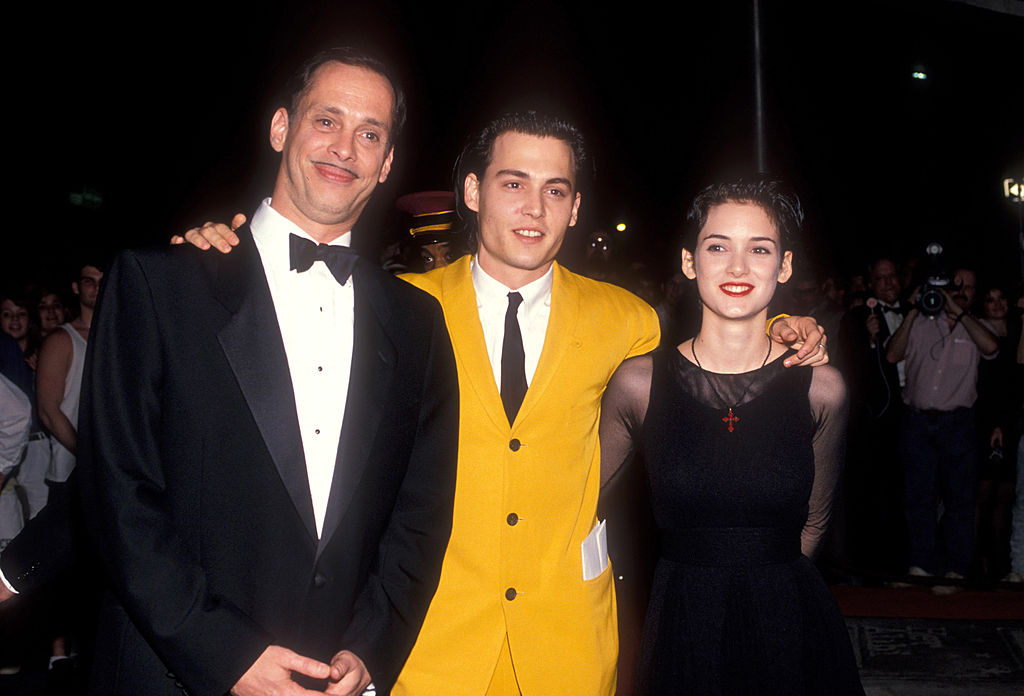 “That face that she wears in the movie is certainly make-up; Kim has a very blank face in real life,” Walters later said.

The grotesque amount of make-up prompted a critic to compare Kim’s character to “a Cubist poster-child.”

Kim herself took all the fuss about her appearance with ease.

“When people see me after seeing that, they think I look really good,” she told The Atlanta Journal in 1991.

It wasn’t just her appearance and facial contortions that people talked about. Kim, who was 34 at the time, made a strong role interpretation in a large ensemble cast that included high-profile names such as Iggy Pop, Ricki Lake, Troy Donahue, Willem Dafoe, and of course, Johnny Depp. In many ways, she was underappreciated as an actress. 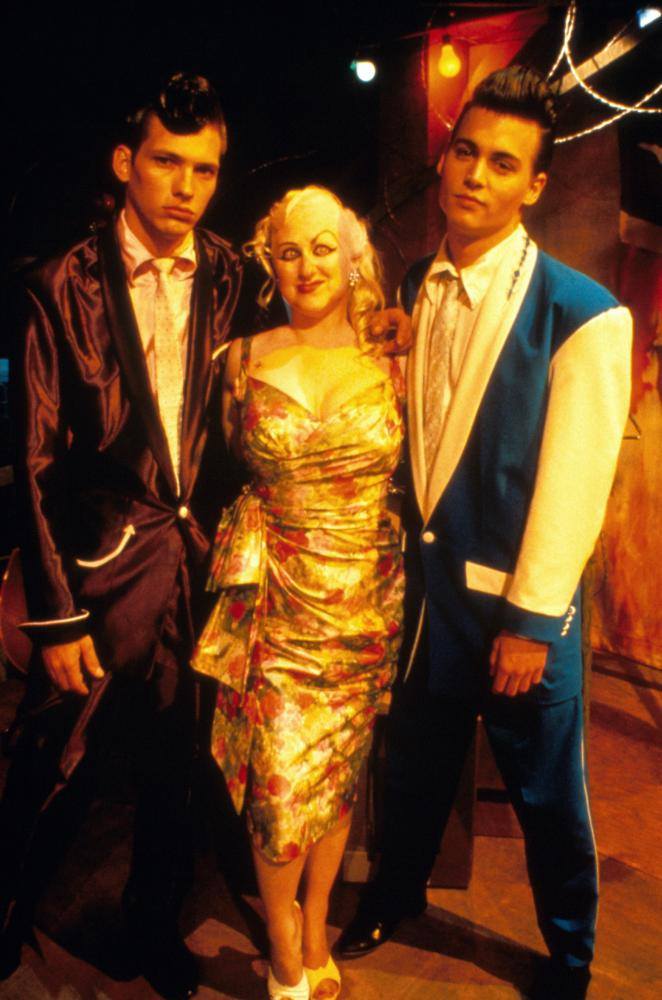 John Waters, Johnny Depp and Winona Ryder during Cry-Baby Premiere in Baltimore, Maryland, United States. (Photo by Ke.Mazur/WireImage)
For example, Walters discovered that Kim’s performance of “Hatchet-Face” was highly appreciated during a series of test screenings.

As a result, the director wanted to include more scenes with Kim’s character, and the film crew was ordered to shoot new scenes with her, which was added to the movie.

Unfortunately, Cry-Baby was considered a box office flop from its $12 million budget after it premiered in 1990.

But since then, the film gained somewhat of a cult status, and the movie was turned into a Broadway musical with all new songs. According to IMDB, the musical opened at the Marquis Theater in New York City in 2008. It ran for 68 performances and was nominated at the Tony Awards for the Best Musical, Book, and Score.

Despite the success with Cry-Baby, Kim McGuire would find it difficult to speed up her acting career. She moved to Los Angeles, but it didn’t help.

In 1993, Kim appeared in the TV movie Acting on Impulse and two years later, she made a cameo in John Waters’ Serial Mom. But looking back at the 1990s, it is pretty clear that Kim was not the hottest actress in the Hollywood.

In 1995, she made her last TV appearance when she appeared in an episode of New York Undercover.

Sadly, the couple would suffer a terrible blow in 2005. Their whole lives collapsed one August day when Hurricane Katrina “slabbed” their home.

“We had really made our place in Biloxi. It’s a shame the way it worked out,” Kim McGuire told Sun Herald in 2015.

Their whole lives collapsed the same one summer day when Katrina pulled over their home.

On August 29, 2005, storm winds and high water forced Kim and Gene out of their home. In fact, the couple had to swim for their lives when the disaster struck with full force.

Kim lost pretty much everything: her house, belongings, family photos, and her way of life. The former actress had grown up in New Orleans and was used to severe storms – but nothing could prepare her for Hurricane Katrina.

Her husband Gene had to carry Kim on his back and did everything to save his wife. They took refuge under a school-breezeway but were forced to face the hurricane for 8 hours before winds calmed down. She and her husband later got evacuated to Mobile, Alabama, where Kim received medical attention after injuring his foot. 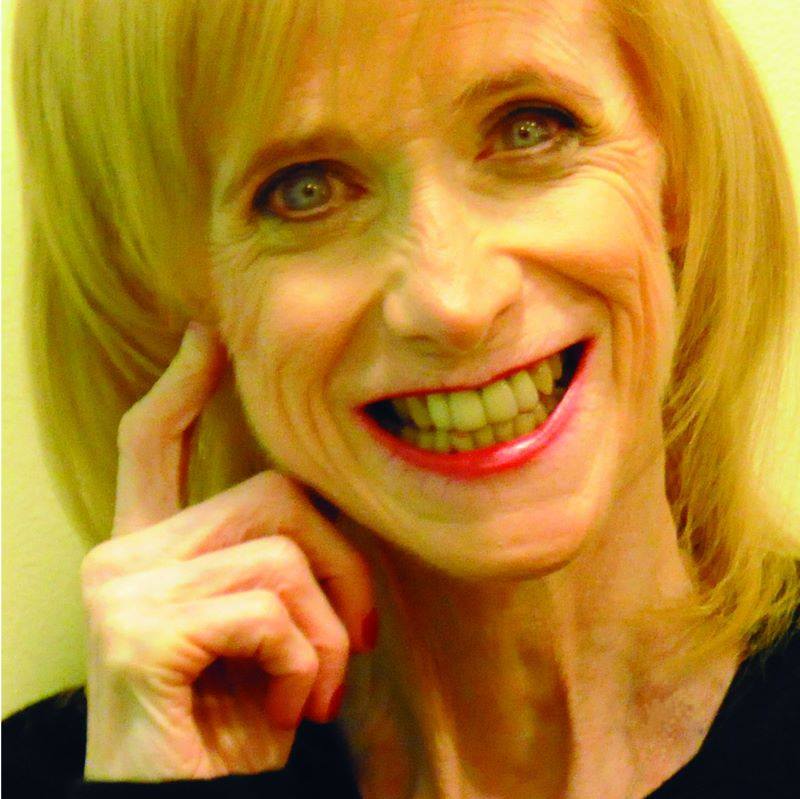 Her foot healed, but Kim’s life was shattered.

According to reports, they lost everything “except for Gene’s Emmy, which was found broken amidst the rubble that was their home.”

After Katrina, Kim and her husband moved around and lived in shelters and hotels. In November 2005, the couple were basically on their own and moved into low-income housing. Kim’s parents, who lived in New Orleans, had also lost everything.

”We wound up having to go into Section 8 housing. A real change. In L.A., both of us were pretty high economically. I was wearing $ 1,200 dress. From that to nothing. Living in Beverly Hills, to nothing. It was just a big change of lifestyle. It’s not just material things. It’s losing roots. I have not seen my parents in three years, which is just horrible,” Kim said in 2015.

Helping victims
As a lawyer, Kim managed to get a job in Alabama. She helped vulnerable women who had left their husbands in the aftermath of Hurricane Katrina.

Over ten years, Kim and Gene moved five times. Yet, the memories of the natural disaster stayed with them forever.

”Though they plan and equip themselves for something like this, it’s never enough. We ought to know: We lived in LA during the 1994 earthquake, we were visiting New York on 9/11, and now we lived through this. I told a friend about all of that and he said, ‘Do me a favor and tell me where you’re moving to next..’, he told the San Diego Union-Tribune after the disaster. 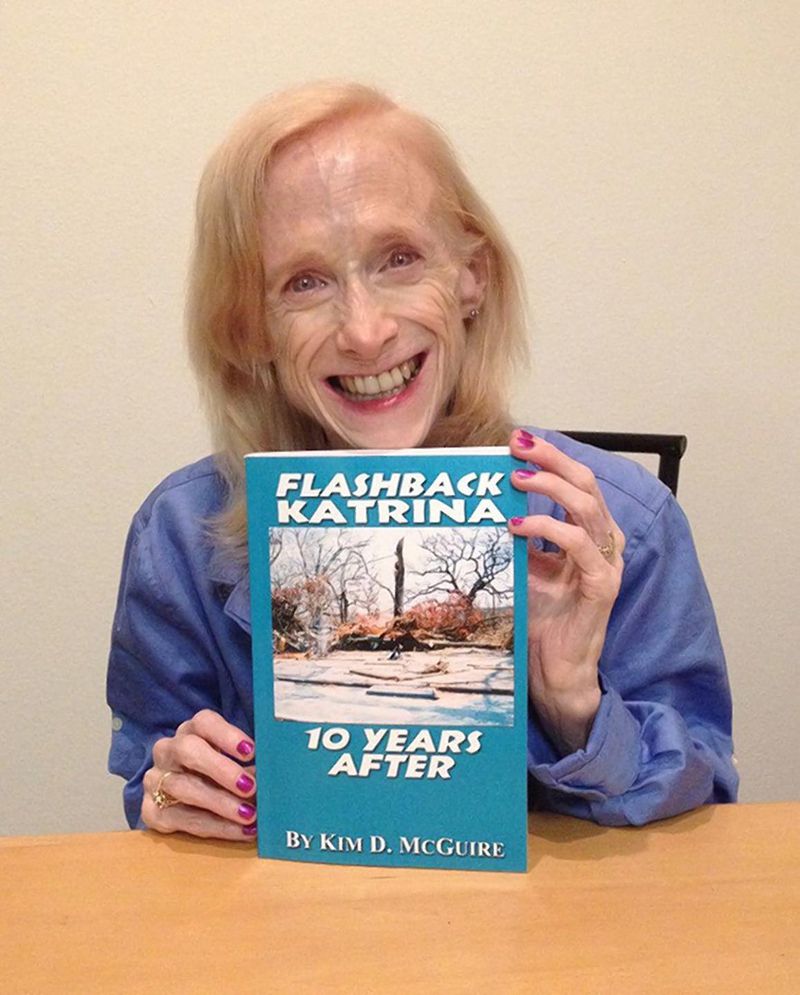 After a 10-year odyssey with homelessness and financial problems, the couple finally established themselves in a new place.

Kim and Gene moved to Naples, Florida, and lived a good life. Despite all the hardships she had to face, Kim was able to maintain her resilience and perseverance. As you could imagine, the whole Katrina event took a toll on both Kim and Gene mentally and physically.

The Cry-Baby actress wrote a book about her experiences from 2005 and how Katrina affected her and her family. She also continued to help the victims in her role as a lawyer.

Tragically, Kim didn’t get the chance to enjoy her new life in Florida for very long. In September 2016, she was admitted to the ICU at Physicians Regional Hospital in Naples, Florida, with pneumonia.

Unfortunately, doctors could do nothing when Kim didn’t respond to the treatments. She died of cardiac arrest the day after she arrived at the hospital. She was 60 years old.

Her death became big news in 2016, and Kim McGuire was mourned by many and missed dearly by her close friends and husband Gene.

”The outpouring of love and prayers for Kim from her family, friends and fans has been overwhelming and most comforting. Kim’s parents and sister thank you very much. Kim was a dancer, choreographer, actor, attorney and author and credited her dear father for instilling in her a love of learning,” her obituary said. 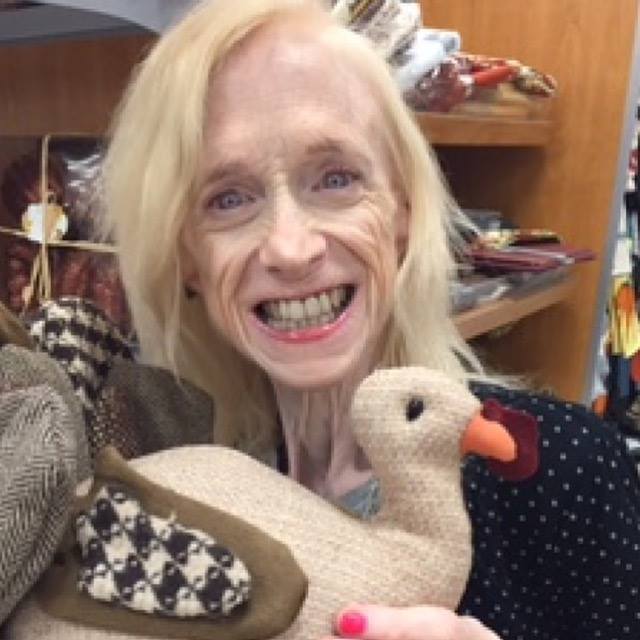 I will always remember Kim McGuire with her fantastic performance as “Hatchet-Face” in Cry-Baby, but after reading about everything she went through in life, and everything she achieved, I realize that she was so much more than that.

Kim was a happy, positive person who flourished in theater and worked as an attorney in multiple states; an inspiring woman indeed! Thank you for all the memories and for helping those women who had a challenging time after Hurricane Katrina.