Jamie and Skyler Scott got married in 2004 and soon welcomed their first child, Shayden, who was born in 2005.

A few years later, Jamie gave birth to her second son, Landon. For five years, the couple desperately tried to have another baby.

They searched for a fertility specialist and during the second round of treatment, they hit the jackpot — but maybe not in the way everyone expected.

At only 19 weeks, Jamie looked nine months pregnant! Her stomach had grown so fast that she could no longer walk and needed a wheelchair.

During the first ultrasound, Jamie and Skyler were expected to see one or two little babies. After all, she had received IVF treatments and had high hormone levels.

But nothing could have prepared the couple for when the nurse pointed to five healthy heartbeats… they were expecting quintuplets!

This only happens in only one in 55 million pregnancies! 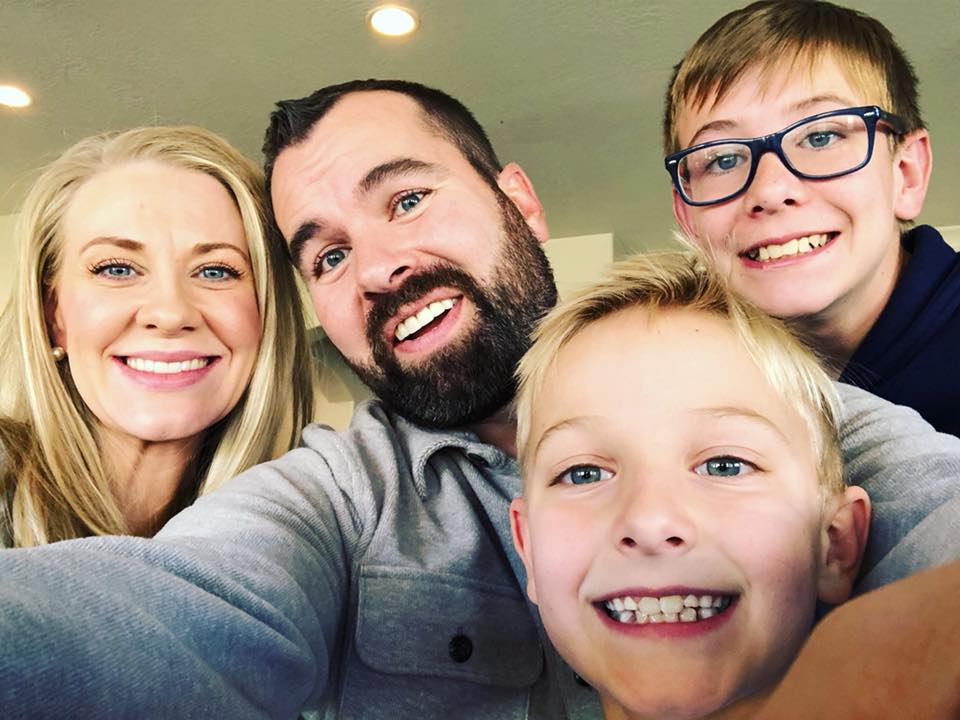 Although Jamie and Skyler were already proud parents of two wonderful sons, they wanted to have three children.

However, this was easier said than done.

Like many other couples who have trouble getting pregnant, Jamie and Skyler sought the help of fertility specialists to get closer to their dream. 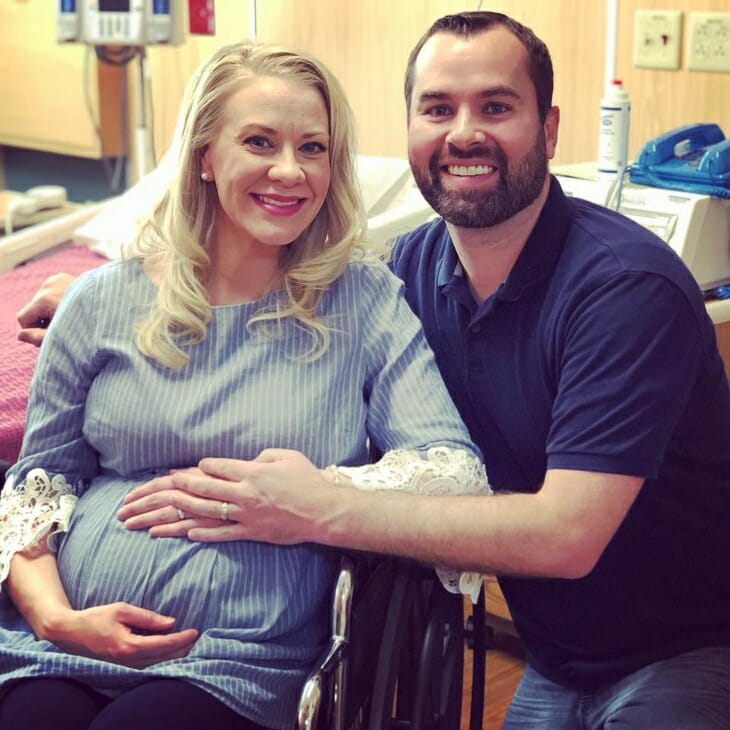 After a while, Jamie bought a pregnancy test to find out if the treatment had been successful.

“I went through so many pregnancy tests, I was used to seeing a negative,” Jamie tells People. 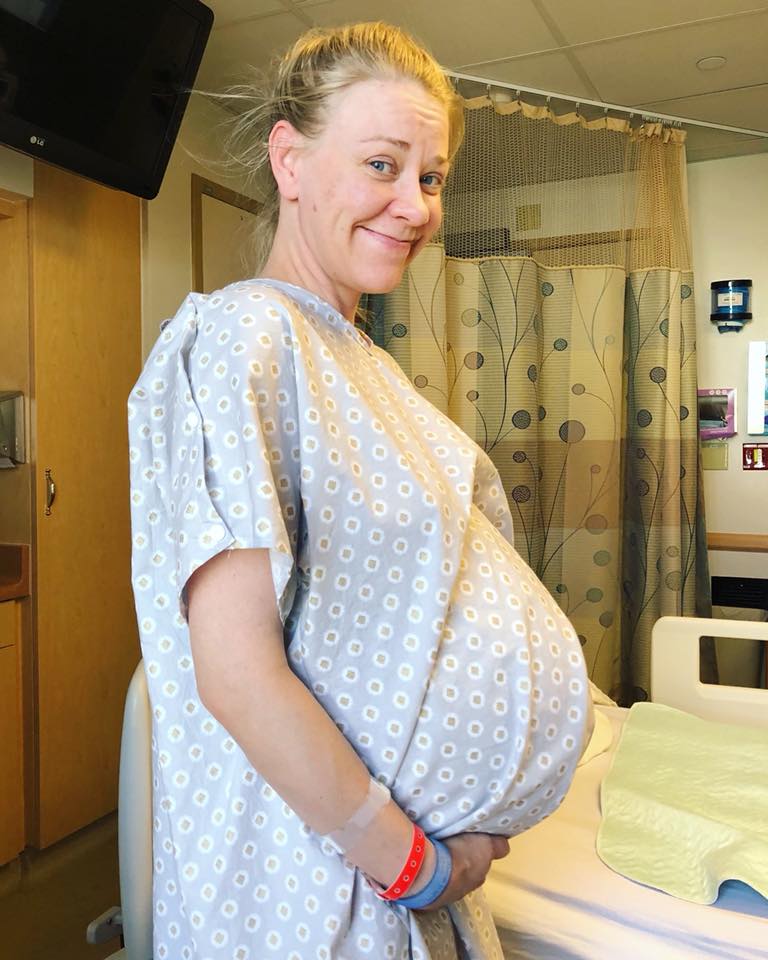 But two pink lines on the test showed that Jamie was pregnant!

A few weeks after her doctor confirmed the pregnancy, Jamie tested extremely high for HCG hormones. Something strange was going on… 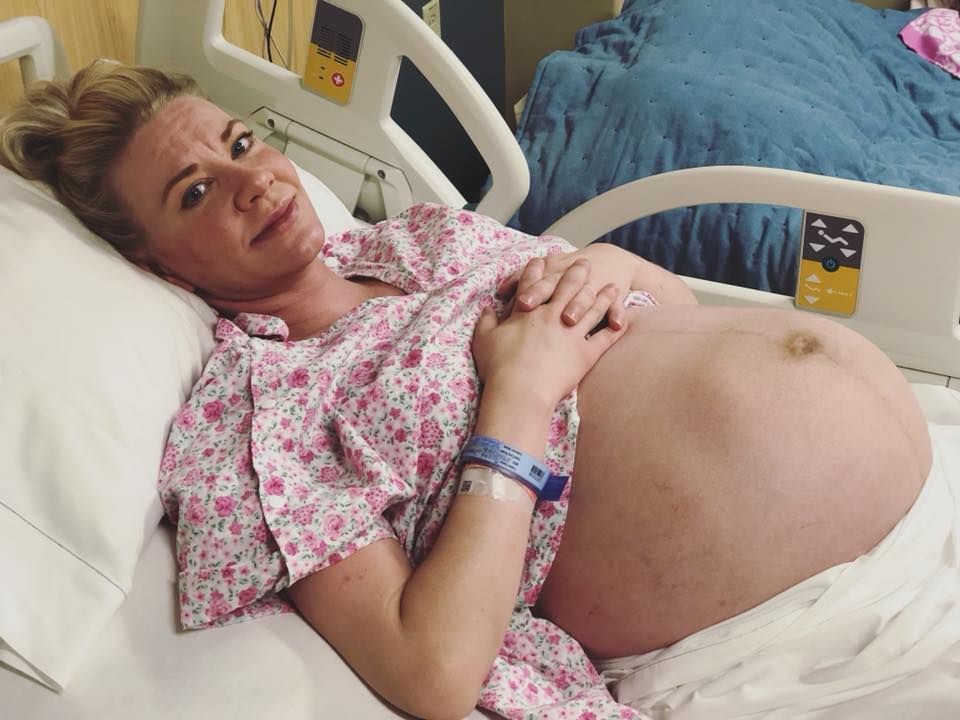 When Jamie and Skyler booked a time for an ultrasound, they thought they might find out that they were having twins.

But Jamie actually had even more babies in there! 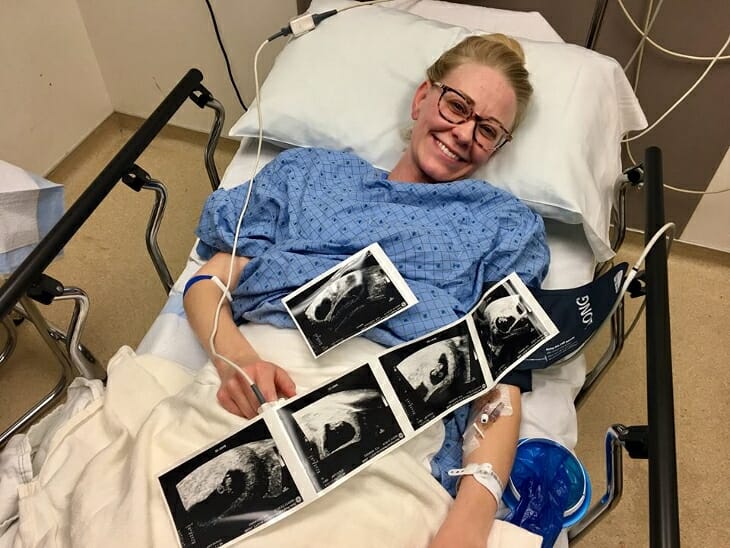 “I was absolutely in awe, and I cried to see all of those babies on the screen,” explains Jamie.

But if Jamie’s home pregnancy test could have shown the actual number of babies, five lines would have appeared and the whole tester would have lit up… 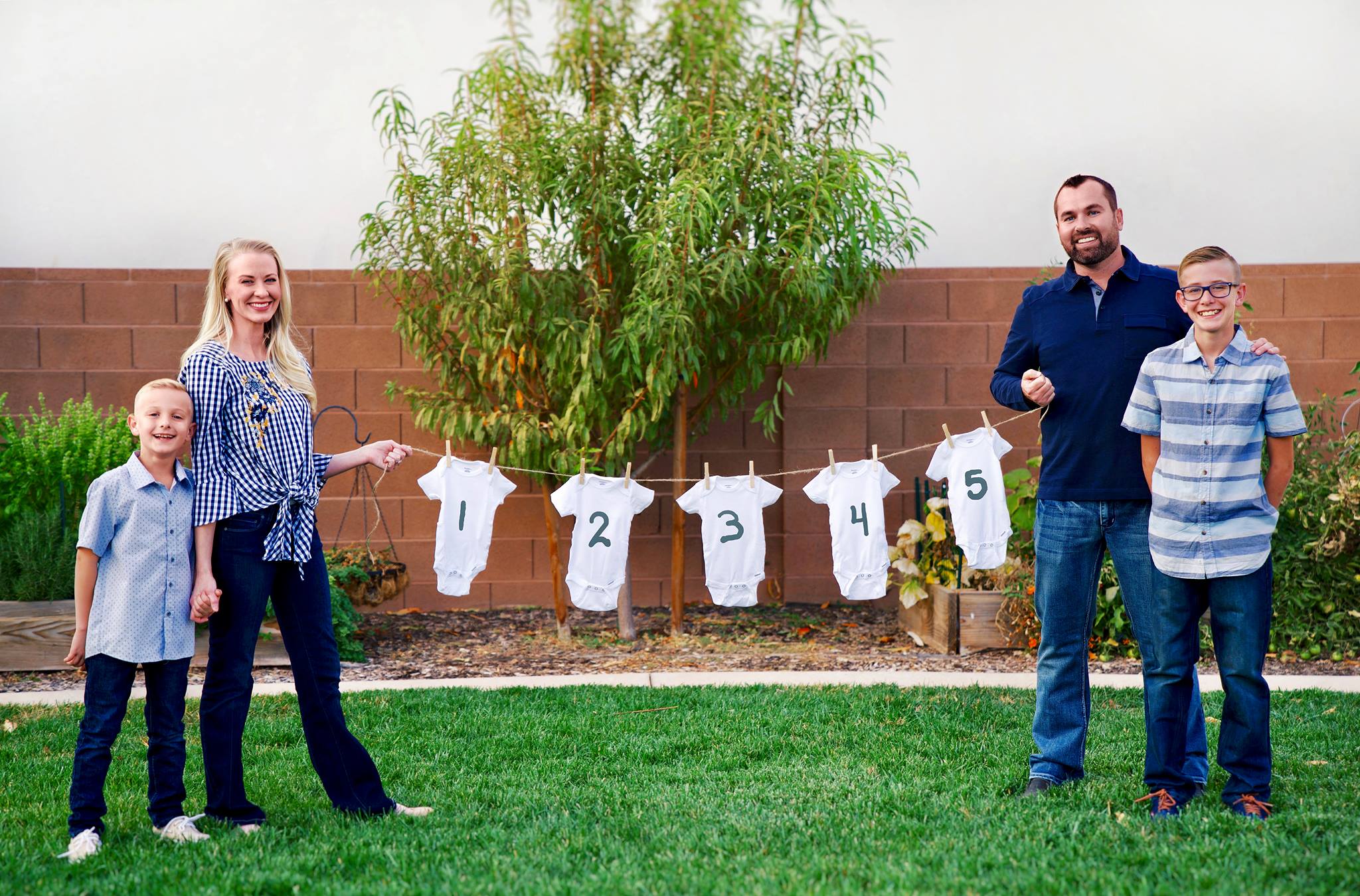 Like many other pregnant women, Jamie got a strange hankering for particular foods. For a while, she was completely obsessed with milkshakes. 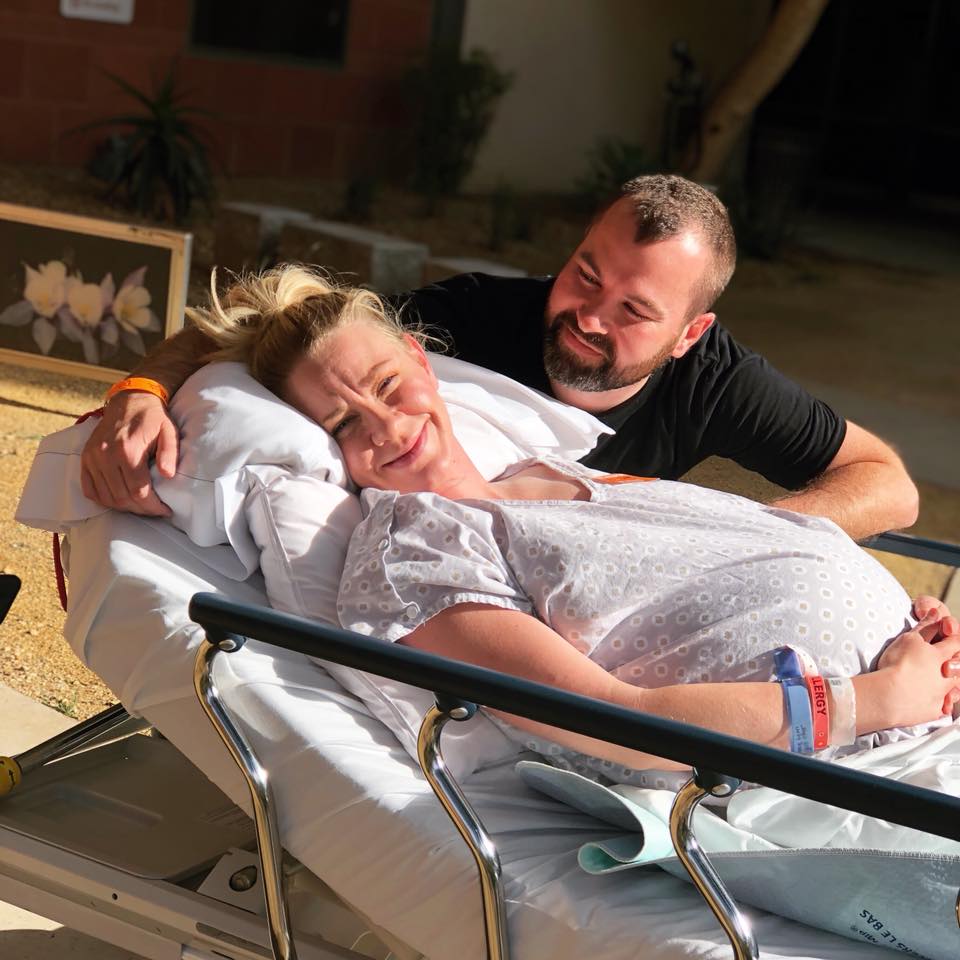 “It’s a little much because it’s already like having a giant pumpkin in my belly. I feel full all the time, but yet I’m hungry and thirsty all the time. I have to eat more small meals throughout the day but packed with high-calories,” Jamie says.

With so many little lives on the line, the couple didn’t want to take any chances.

They temporarily moved from their home in St George, Utah to Phoenix, Arizona, where Jamie was kept under the constant supervision of experienced obstetricians. 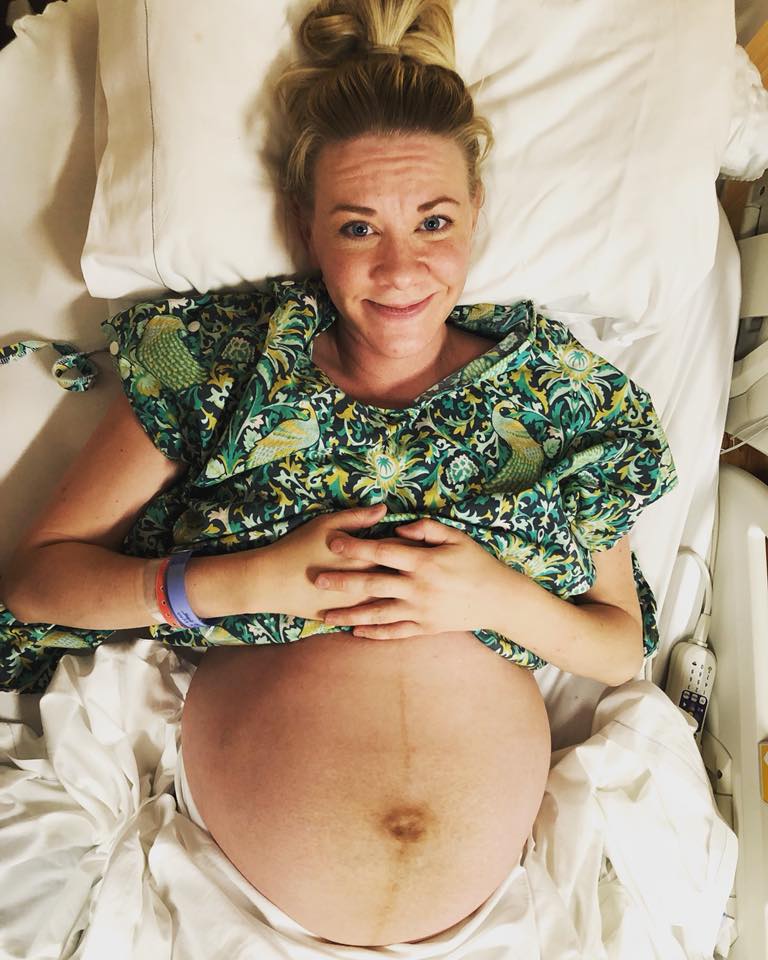 Doctor John Elliott was ultimately responsible for Jamie’s pregnancy. He isn’t just an expert in the field.

During his career, Elliott has delivered 24 sets of quints and 108 sets of quadruplets! It makes him perhaps the expert in the field. 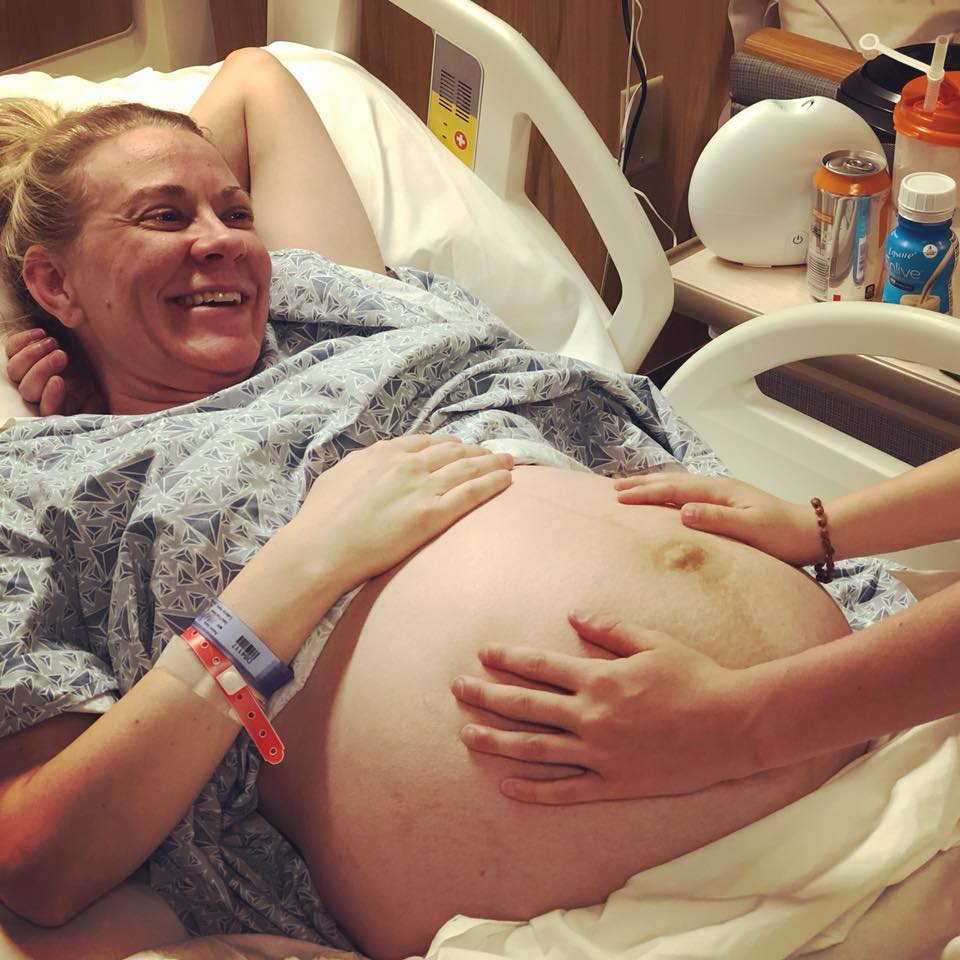 Jamie and Skyler were delighted with their new additions, even though they had only planned for one child.

“I wanted to be a great mother for all these individual human beings, and I was thinking about how we were going to do this. Then, I just had this overwhelming peace come over me, and just this message, ‘Just be love.’ I thought, I can do that,” Jamie says.

Not many parents get the chance to go on a whole new adventure filled with five little lives. 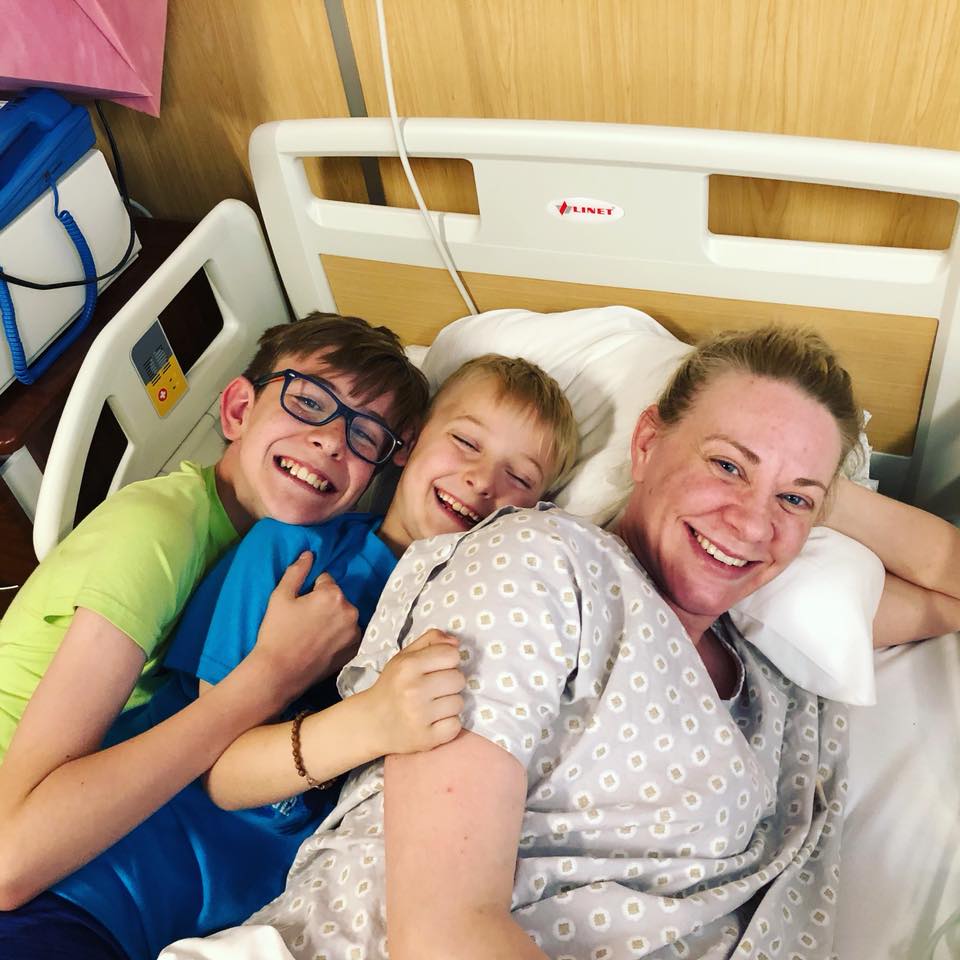 “Our goal was 32-and-a-half weeks. Dr. Elliott’s goal was 34 weeks,” Jamie tells LDS Living. “Given that our little Logan wanted to come at 21 weeks, I am so grateful that our babies stayed put until 29 weeks. I am just amazed at how well they are all doing.”

The quints entered the world at 29 weeks, which is longer than the national average just under 27 weeks for quints. 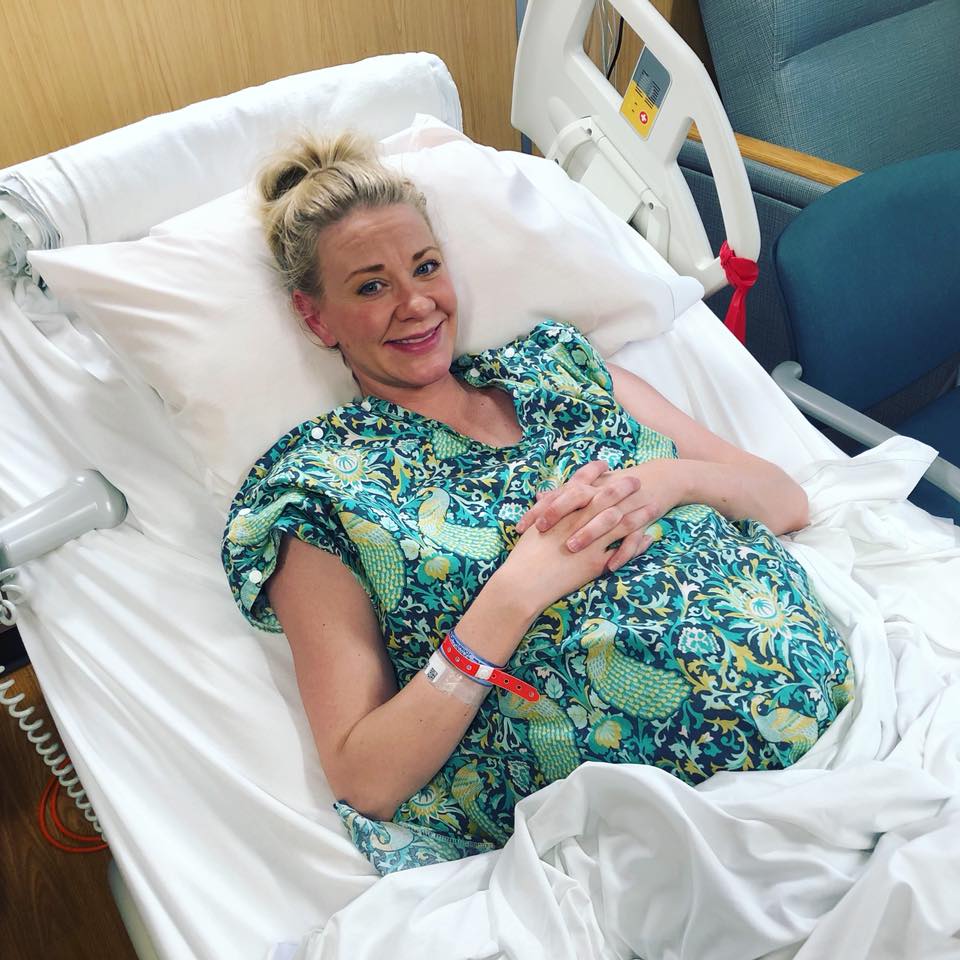 Lily, Violet, Daisy, Logan and Lincoln were born on March 21, 2018 at the hospital St. Joseph Hospital and Medical Center in Phoenix.

It took less than 60 seconds to deliver all the children.

Check out these cute little bundles of love! 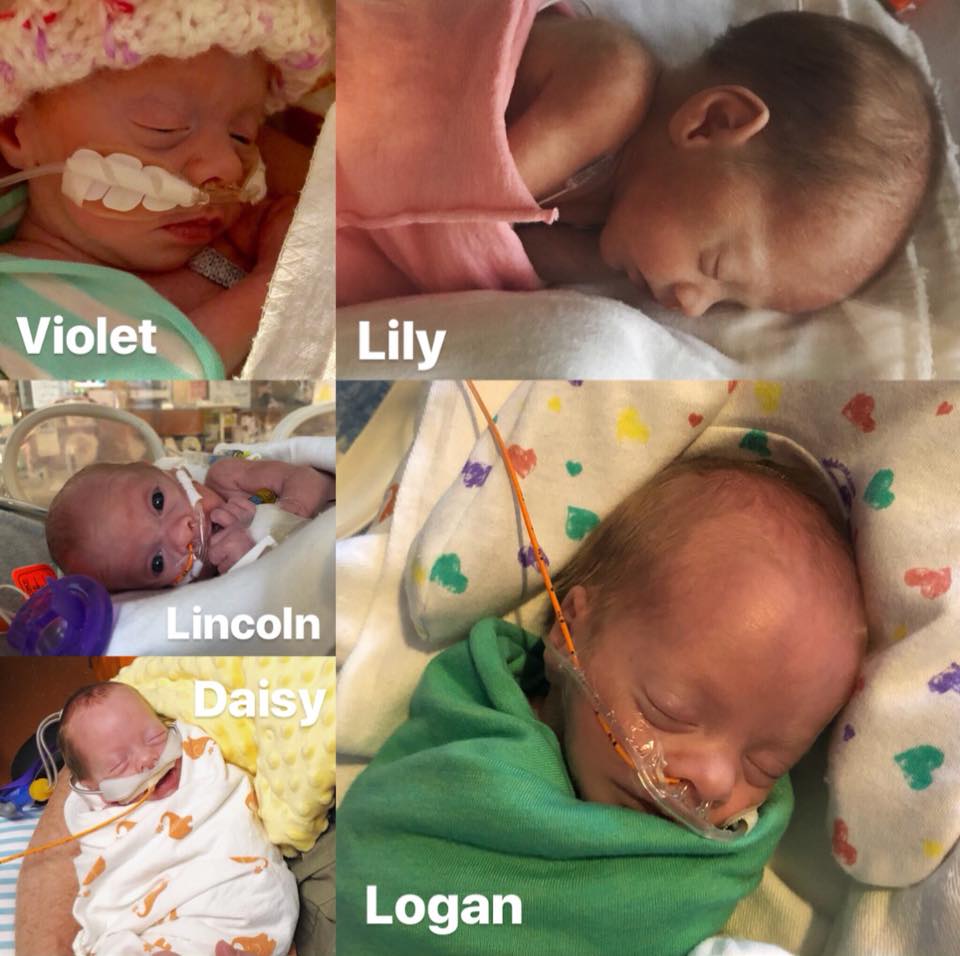 Each baby weighed less than 3 pounds (1 kg) at birth.

Miraculously, all five children were born healthy. Complications in this kind of birth are normally quite common. 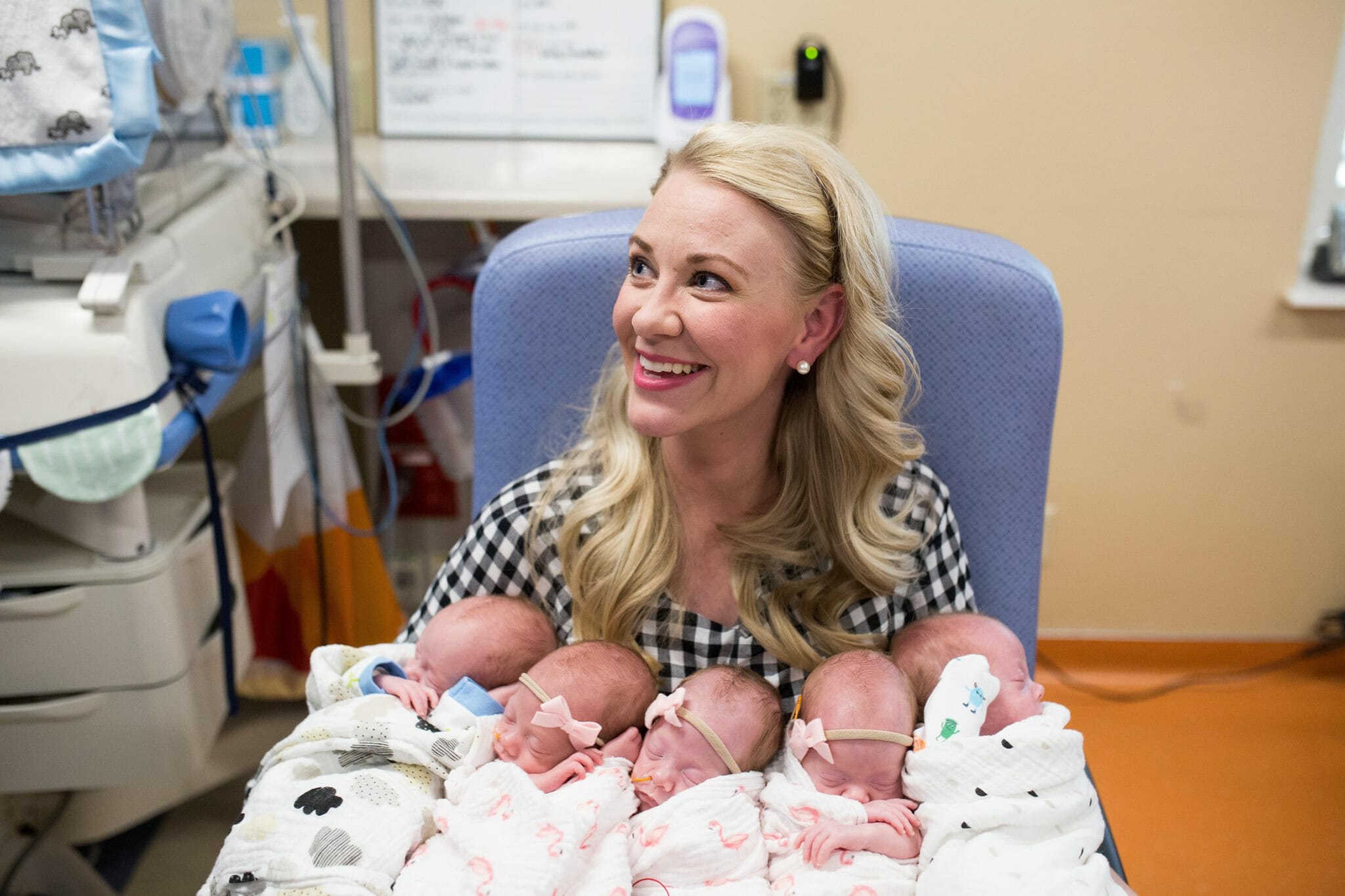 The quints stayed in the hospital for six weeks and the family has just begun to settle in at home.

Mom and Dad are currently focused on keeping the kids fed, with Jamie pumping breast milk every three hours. 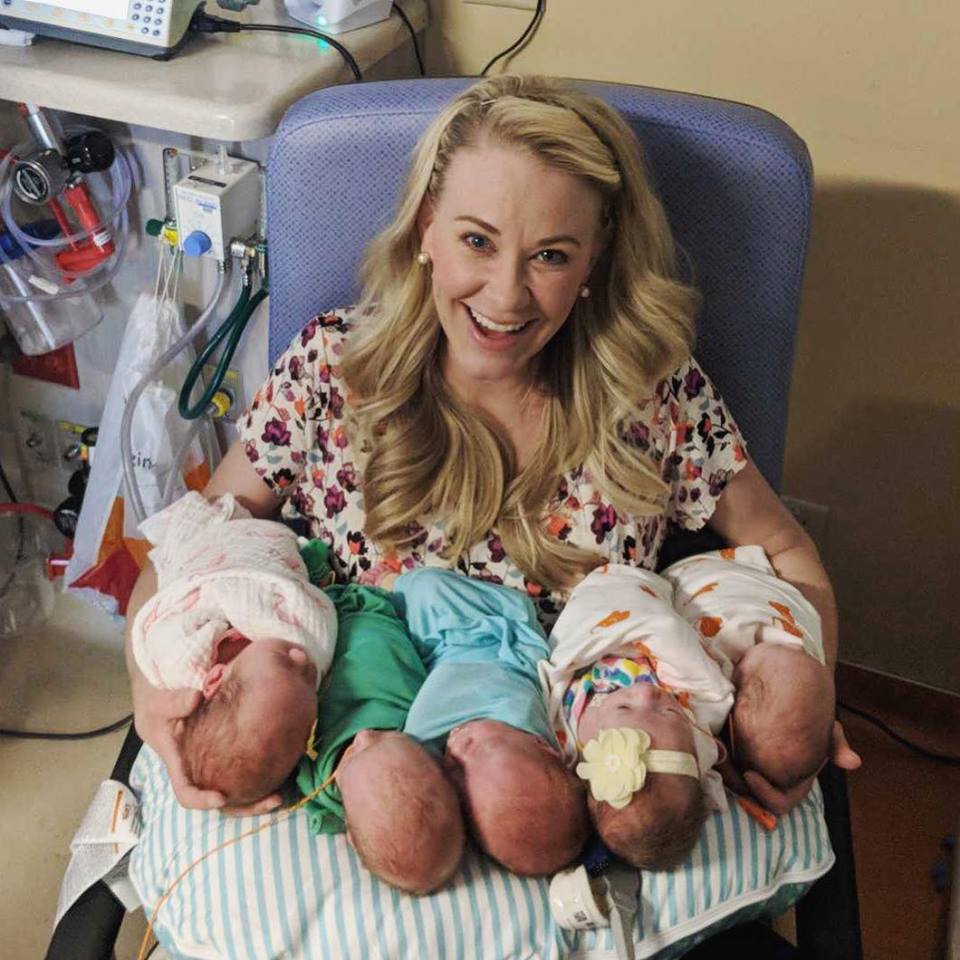 The babies are gaining weight by the day and the family says that everything is going well.

First, Jamie and Skyler were reluctant to share details of their pregnancy in public. But today, the couple doesn’t regret anything.

“The messages of love and hope that we’ve received from around the world have really helped strengthen us to get through this tough time of very, very high risk pregnancy,” says Jamie. 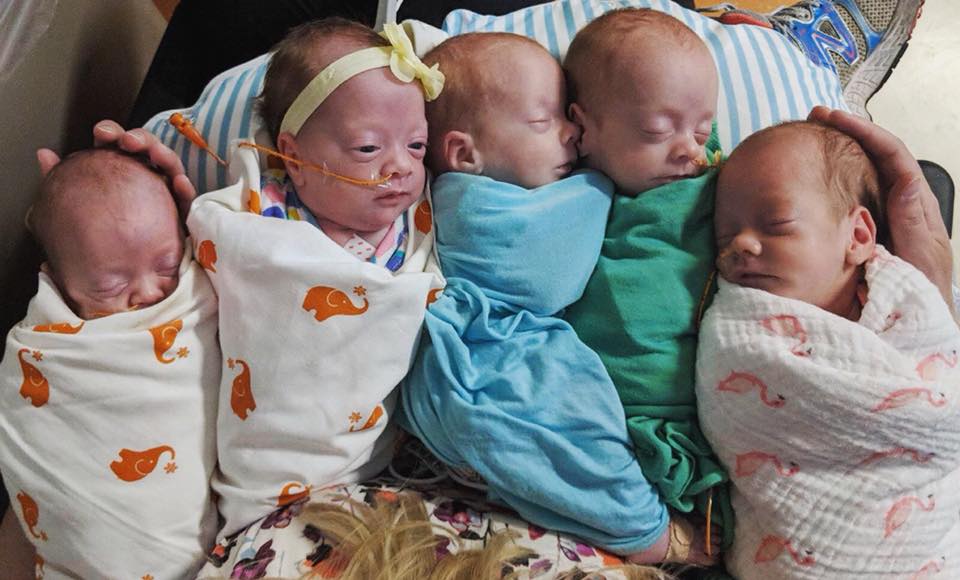 It’s so wonderful that everything went well and we got to ride along on this magical journey!