Carrot Top – born Scott Thompson – has been entertaining people for decades. Since 2005, the comedian has had a headlining residency at Luxor Hotel and Casino in Las Vegas, Nevada, drawing thousands of fans via hundreds of performances each year.

But though Carrot Top’s comedy career has been nothing short of fantastic, he’s also had his fair share of tough times. The 57-year-old has been accused of both taking steroids and undergoing plastic surgery to alter his appearances. Moreover, certain other comedians have claimed that he isn’t even a “real” comedian.

So what’s the truth? And how did Carrot Top get to this point in his life? Here’s all you need to know about the charismatic entertainer! 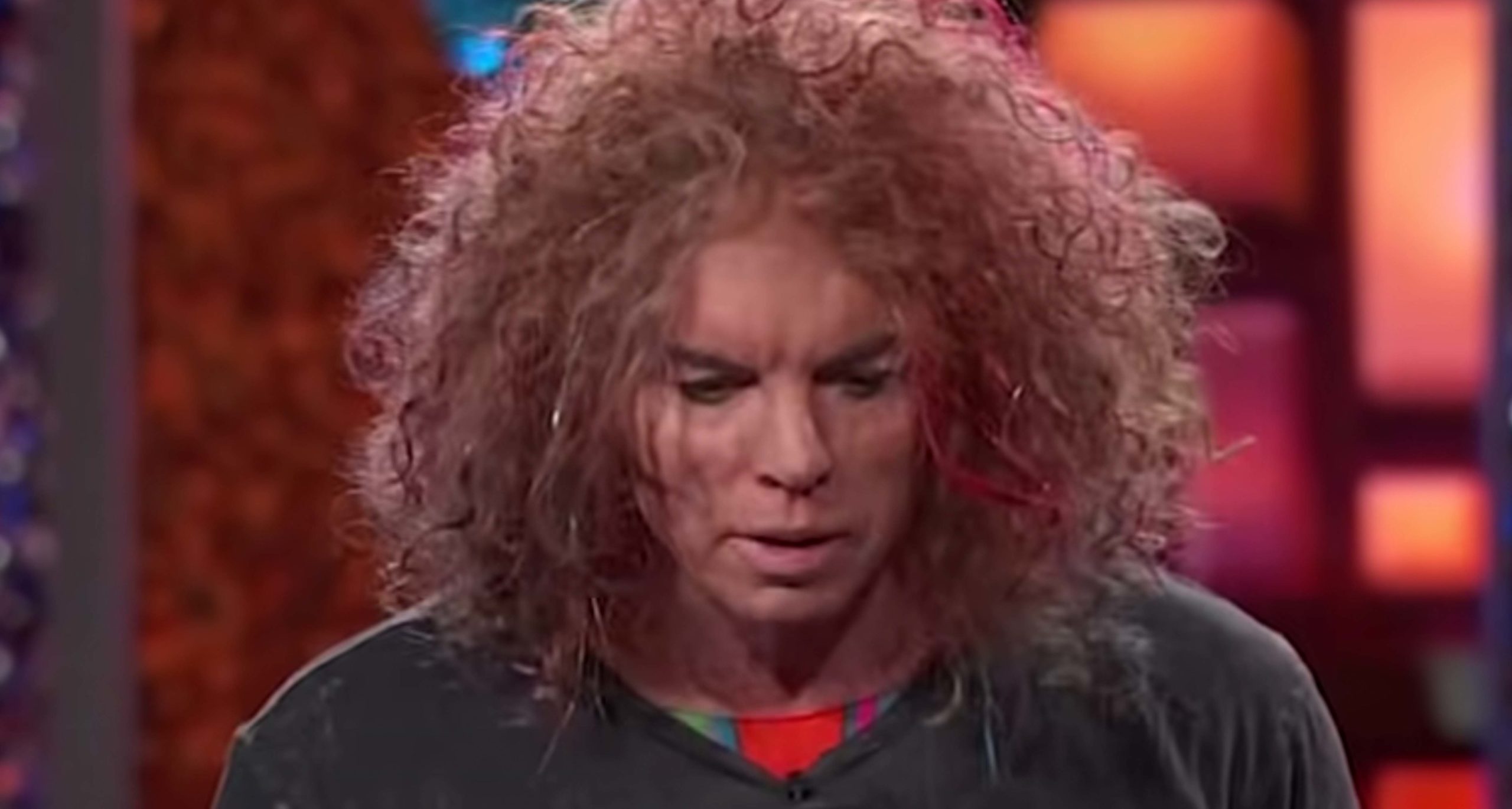 The comedian known to many as Carrot Top was born Scott Thompson on February 25, 1965, in Rockledge, Florida. He grew up in another city in Florida, Cocoa, but early on he knew what he wanted to do when he grew up.

He always loved comedy, but it was a far cry from what others in his family were doing. His father worked at NASA, building spaceships and training astronauts, while his brother went into the Air Force Academy and became a jet pilot.

Carrot Top described himself as the “oddball” of his family. In his own words, he was “gluing kickstand onto cowboy boots” while his family worked with other things entirely.

“I was a kid when I wanted to do comedy and it was like, ‘How do you become a comedian?’ There are no comedy schools. Clown school, maybe, but there was no stand-up comedy school. I would really honestly stand in the mirror and just pretend and tell jokes,” he told The Good Men Project.

Carrot Top often listened to the radio, and one day he got an idea. A comedy club in West Palm Beach had a show on the radio, and after they announced that they were holding open mic nights, he saw his big chance. 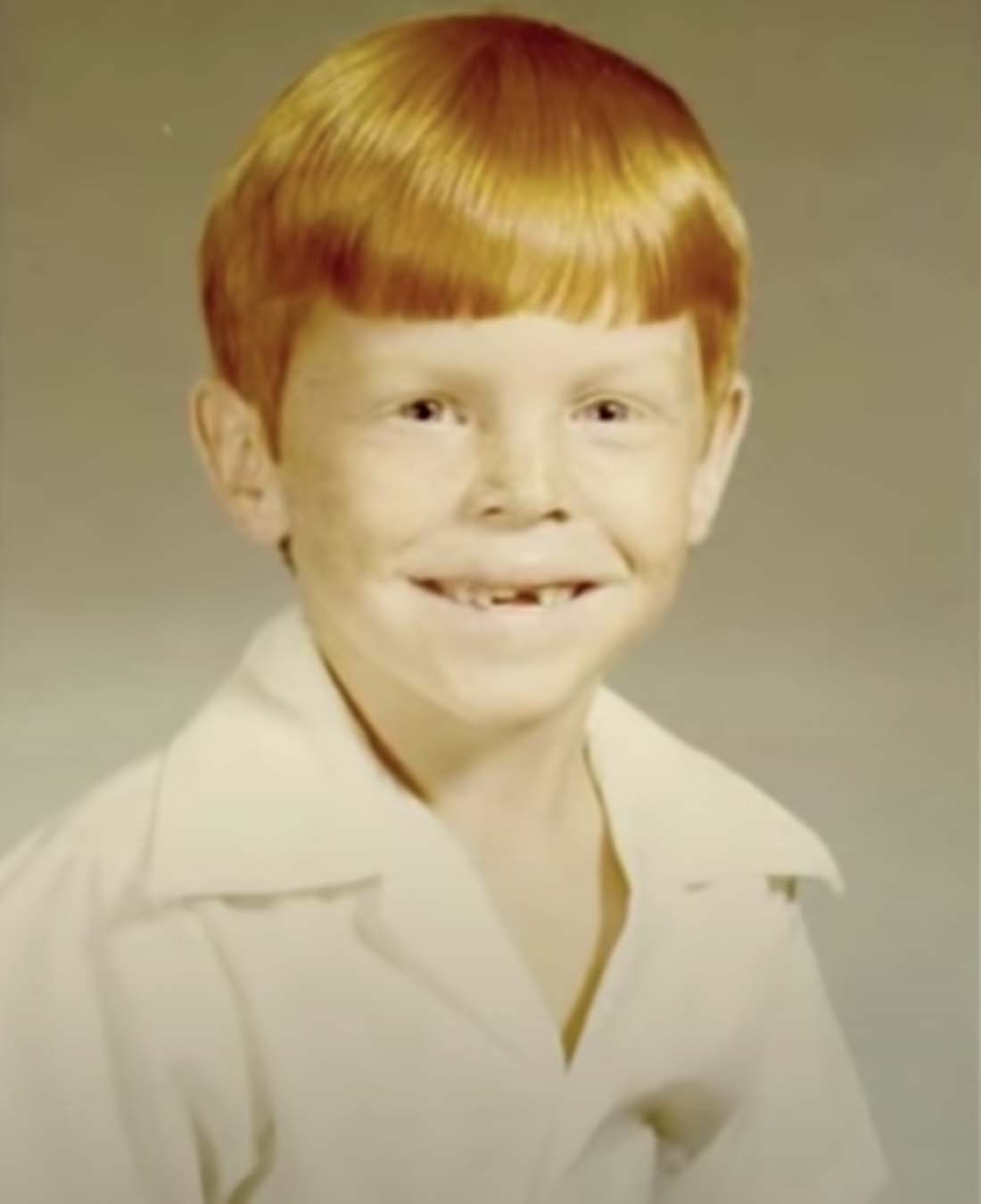 One night, Carrot Top went down to the comedy club alone to watch the performances – as fate would have it, he got the urge to come back the next week to perform himself.

Generalized props for his comedy performances

“I put together what I thought was an act, and I showed up. The woman said, ‘You were so funny, but the stuff you’re doing is all about [your] college,’” he recalled.

“She said, ‘Everyone that comes to this club is not going to be in college. They are going to have jobs, and there might be 40-year-olds, there might be 60 year olds. It’s going to be a collection of different age groups and occupations, so your stuff has to be a little bit more general.’”

It was at that point that Carrot Top created his signature move.

He became known for turning ordinary household items into props that left everybody laughing. Even at the earliest point of his burgeoning comedy career, it became a vital part.

He started thinking of generalized props, which helped him find his on-stage personality. Today, we know that to have been a great call.

Now, we’ve seen all kinds of nicknames and stage names throughout entertainment history. 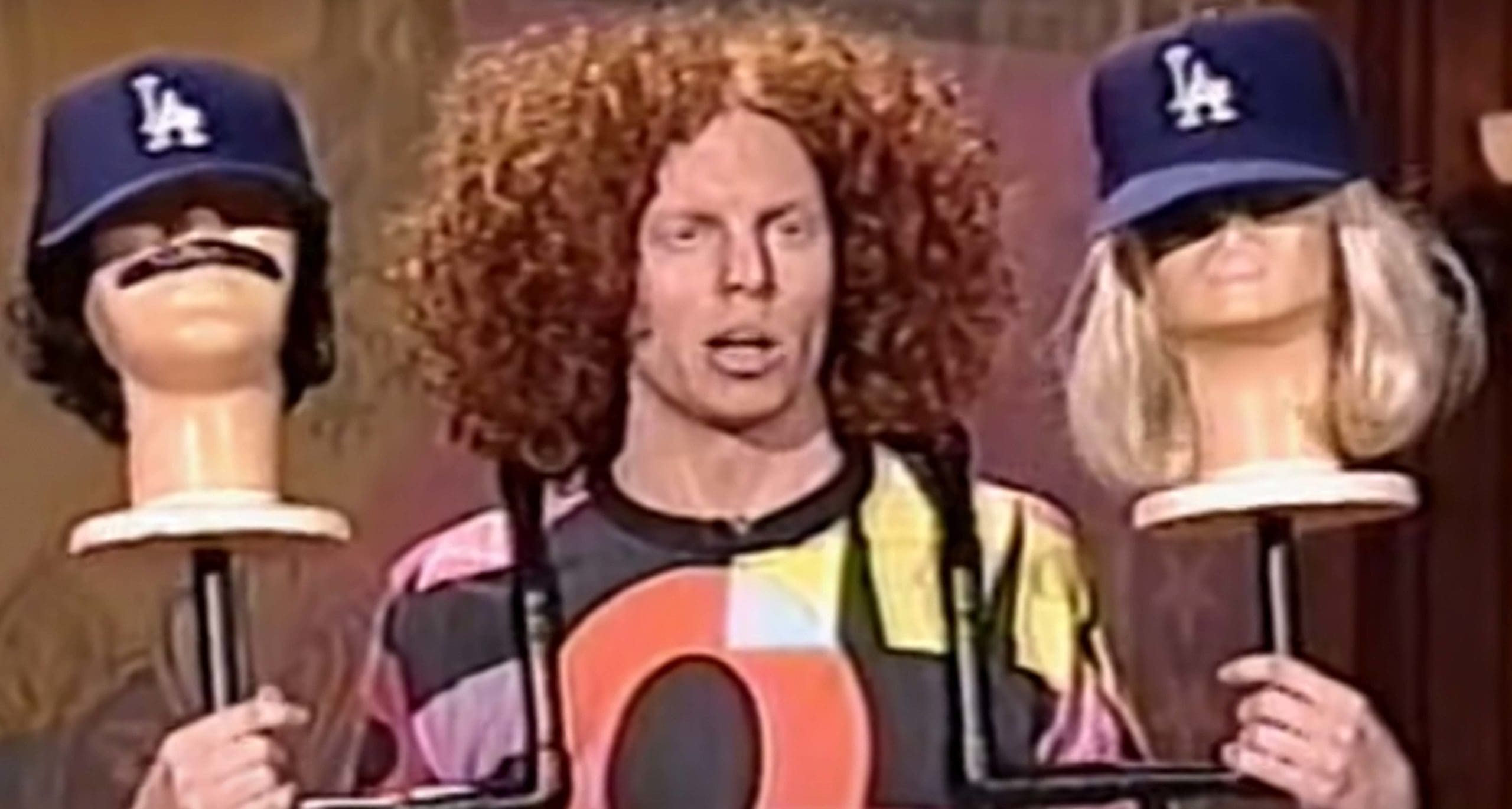 Of course, some have been better than others. A few, ultimately, are only ever known by what they call themselves on stage.

Why is he called Carrot Top?

That goes for Carrot Top, though no one else can claim responsibility for the name. Rather, the red-haired comedian gave it to himself.

“Unfortunately, I had something to do with that. It’s a blessing and a curse. Why I did it? I don’t know.. I thought the name Scott Thompson was kind of boring. Well, not kind of, it is. Being a stage performer, I always thought I should have something fun,” he said.

“Queen Latifah was taken, and so I thought, ‘Gosh, I need something better.’ I went up to the stage one night and said, ‘Bring me up as Carrot Top.’ They said, ‘Carrot Top? Are you sure?’ I said, ‘Yes, I’m pretty sure.’ And that was it. I was Carrot Top forever.”

Carrot Top went on to study at the Florida Atlantic University, graduating in marketing. It was at that point that his comedy career really took off, and he performed on campuses all across the US. In 1992, he was even named the college Entertainer of the Year and Comedian of the Year by the National Assn. of Campus Activities.

Carrot Top knew how he wanted to perform as soon as he finished school. He said he wanted to make his shows like “a rock concert”, thereby generating the same type of enthusiasm and excitement. 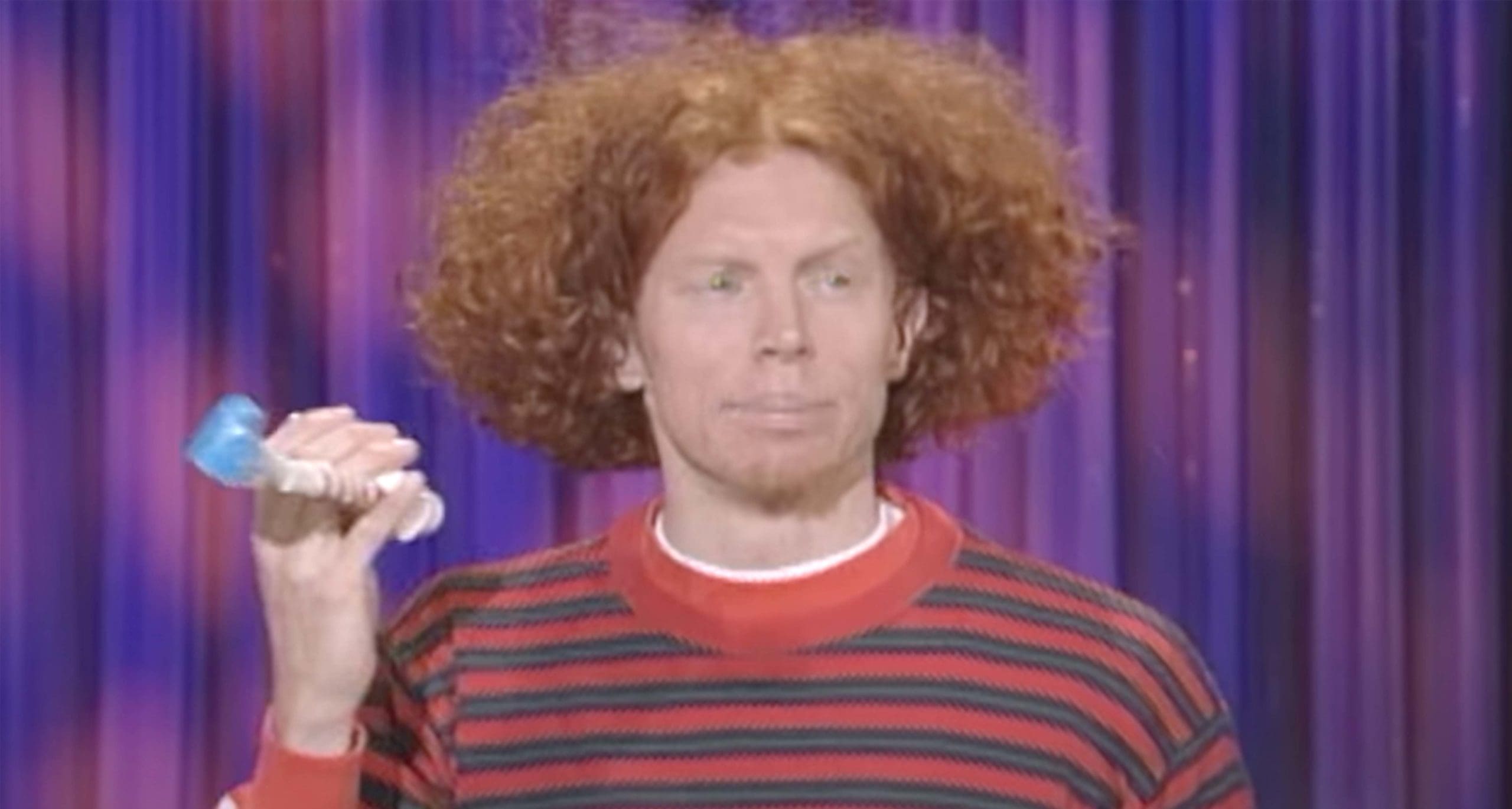 Fortunately, his high-energy performing style and funny routines gave him a huge fan base. Young people were especially fond of his technique.

He used plenty of props, flashing lights, smoke bombs, and even played music from music icons such as Michael Jackson and Madonna during his gigs.

“When I started touring at the beginning of my career, I had two trunks and a strobe light,” Carrot Top told the Los Angeles Times in 1995.

“Things got pretty crazy pretty fast, and before I knew it, I had a team touring the country in an 18-wheeler with 35 trunks full of props.

As his comedy performances became ever more famous, Carrot Top got to perform on big television programs such as The Tonight Show and Regis & Kathie Lee. Naturally, not everyone was a fan of what he was doing.

Saturday Night Live alumn and comedian Dennis Miller mocked Carrot Top; others such as the late Bill Gicks did the same. Legendary comedian Dom Irrera went one step further, saying: “I don’t consider him a stand-up. I consider him a clown.” 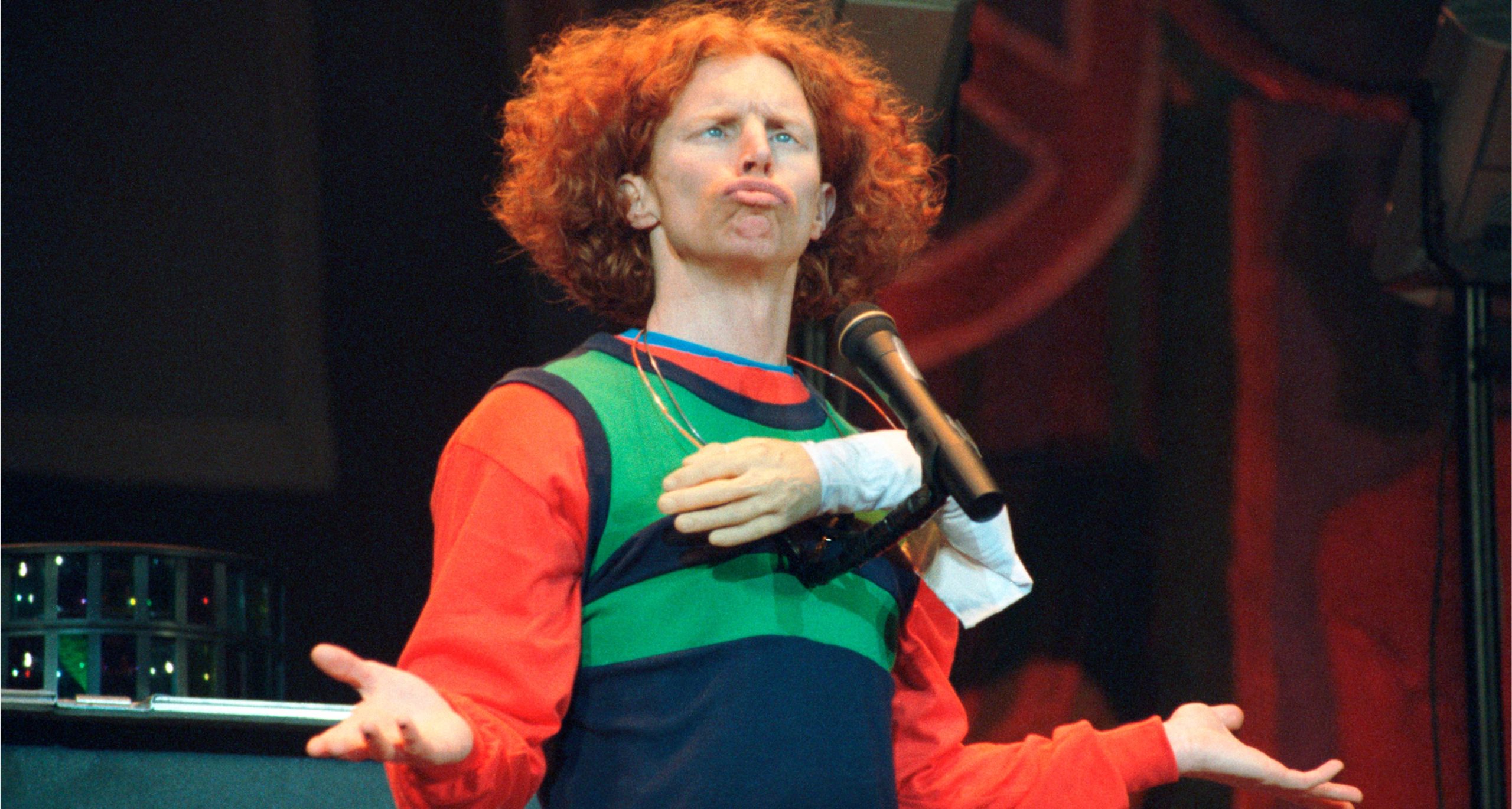 “I think what I do is very creative and clever,” Carrot Top said in response to the criticism.

“A lot of comics don’t look at it that way. [That issue] always comes up. It kind of eats at you after a while. Why are so many people bitter and jealous in this business? Everybody has their own style. If you went to the movies every week and everybody acted the same way Tom Cruise did, boy, wouldn’t that suck?”

While some might not enjoy Carrot Top’s type of comedy, others certainly do. Since 2005, he’s had a headlining residence at the Luxor Hotel and Casino in Las Vegas, Nevada, doing more than 200 shows a year.

Carrot Top – who signed a deal that will keep him at the Luxor until 2025 – described it as being “like show and tell, but with liquor.”

Moreover, it turns out that plenty of celebrities love Carrot Top. One of them is Jack Nicholson – who Carrot Top shared a wonderful anecdote about.

“I was in Aspen years ago. I was walking along after working out at gym. It was about 9 in the morning. It was misty. And there’s a guy walking across the street toward me and I think, ‘Gawd, that’s Jack Nicholson.’ Then I realized it is Jack Nicholson,” Carrot Top explained, adding that he was so star-struck that he decided not to say anything.

In the end, it was the legendary The Shining actor who approached the comedian instead.

“‘Top! I’ve always wanted to meet you!’” Carrot Top recalled Nicholson saying, adding that he “was as down to earth and as nice as he could be.” 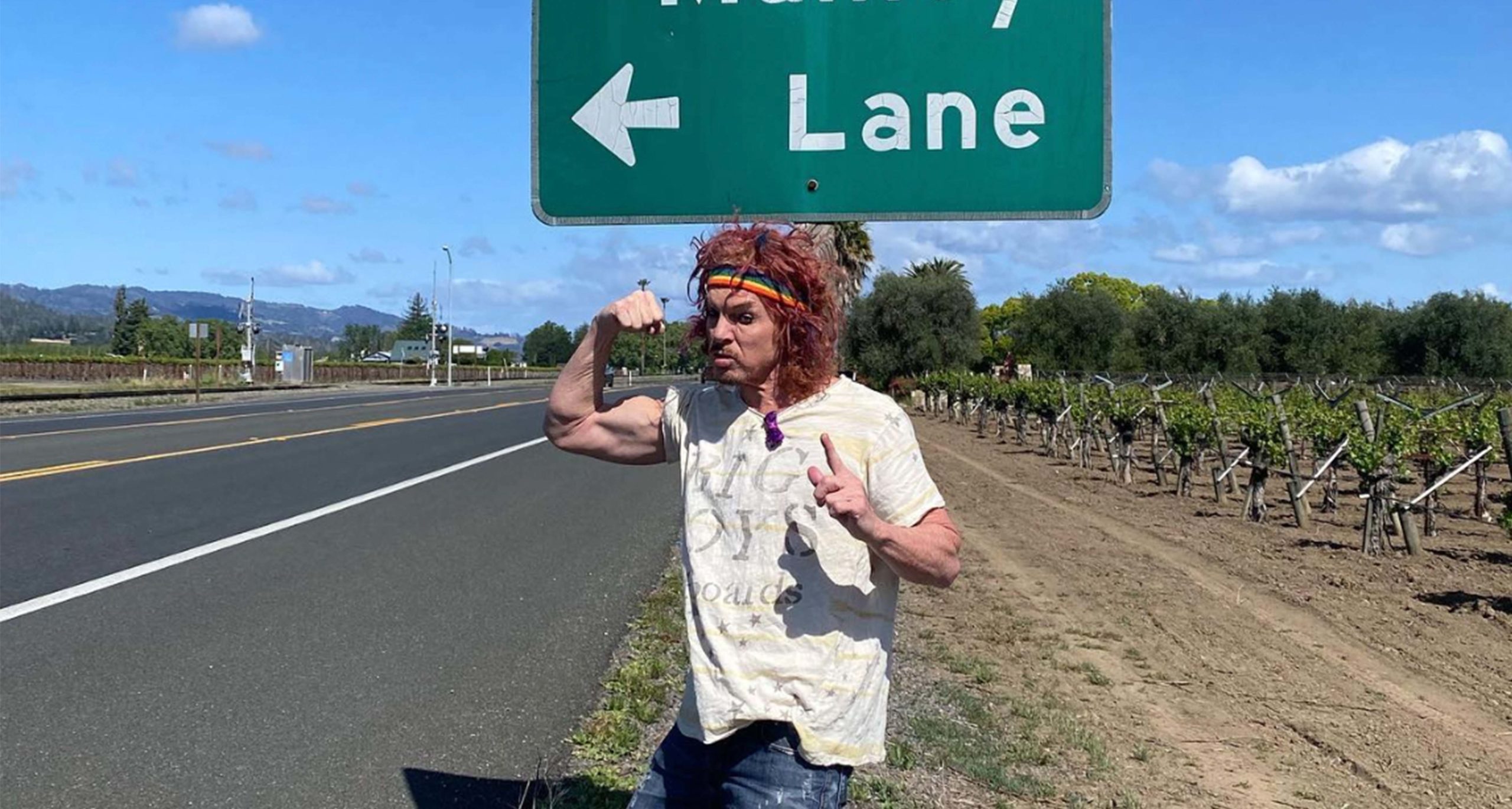 With the turn of the new millennium, Carrot Top also began branching out into a different field.

He appeared in several television shows as an actor, including a 2002 episode of Scrubs and other shows such as N.Y.U.K and ComiXspotlight. He also had some more minor, uncredited roles in The Hangover and Larry the Cable Guy’s Christmas Spectacular.

But Carrot Top also became interested in another field, bodybuilding. His transformation was swift and surprising to many; as if from nowhere he suddenly became ripped. Rumors then ran amok about him being on steroids.

In 2014, Carrot Top insisted that he had never taken steroids, but rather “worked out like a crazy man.”

“I also did all the supplements, all the creatines, glutamines, all that stuff,” the comedian said. “I did everything but steroids, I did stuff that you could buy at GNC, but I ate tons of it.”

The following year, the comedian told Esquire that he didn’t believe people genuinely thought he was on steroids, but that people thought he was “bigger than they wanted me to be” or expected him to be. 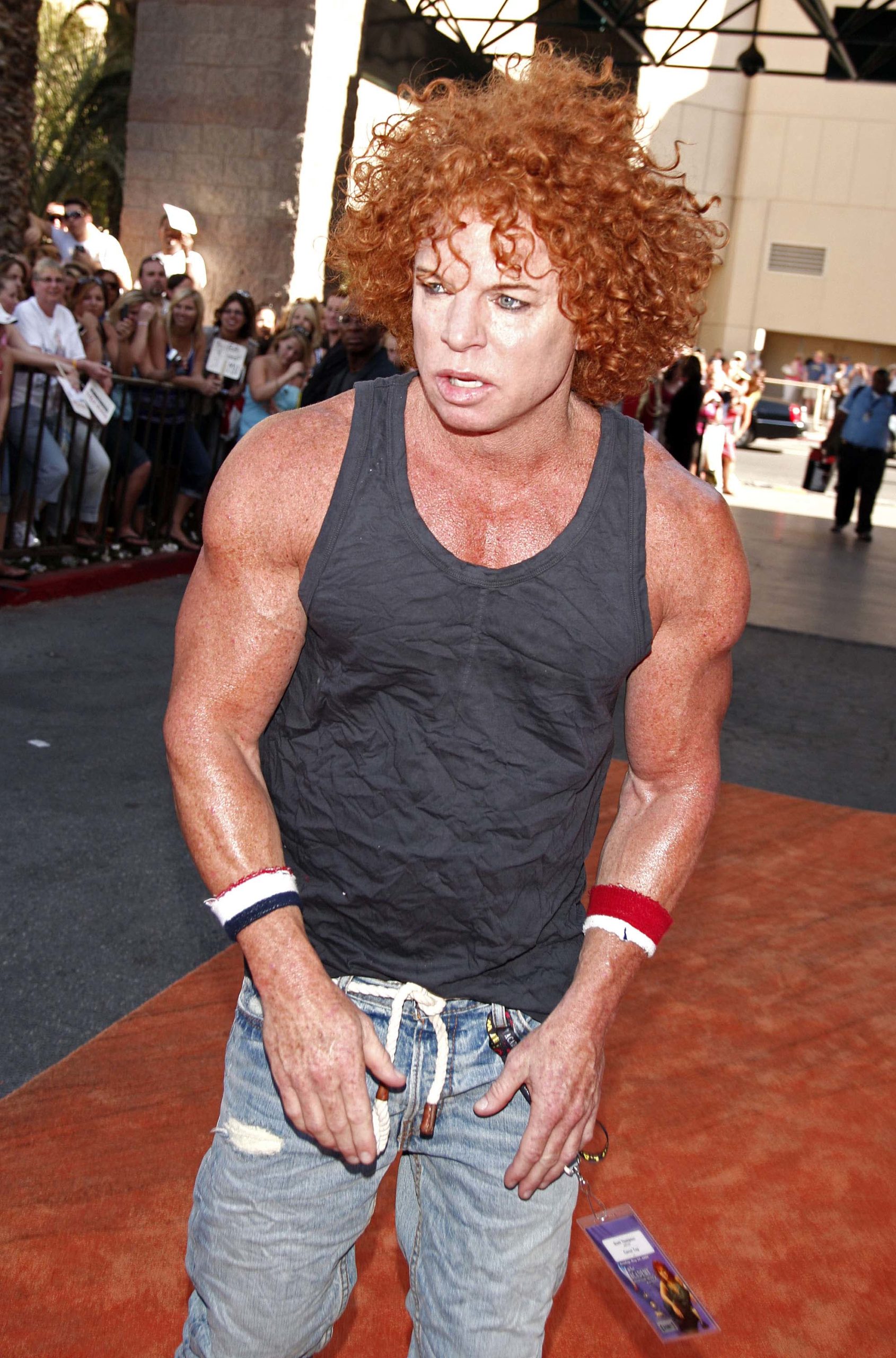 Then, one day, he decided he’d had enough.

“I quit cold turkey. Didn’t go to the gym for maybe a year. Then I started running. That’s where I am now. I just kind of wanted a normal build.”

Have Carrot Top had plastic surgery?

But the rumor mill didn’t stop at just steroids. Over the years, there has been much speculation about Carrot Top undergoing plastic surgery.

During a roast on Comedy Central back in 2013, he recalled one comedian telling him, “Jesus, Carrot Top, when are you gonna stop with all the plastic surgery? You look like the guy from The Mask or something.’”

“I’m sorry that I look good,” he recalled the incident when appearing on Oprah: Where Are They Now?, as reported by Huffington Post. “I don’t think I look anything different than I did when I started [in comedy].”

He added: “I mean, if I was going to have plastic surgery, I would look better than this! My crew, my family, and my friends all know I work so hard I wouldn’t have had time to get work done if I wanted to. That was absurd.”

Carrot Top has faced all kinds of criticism during his career from people picking on him, to accusing him of taking steroids and undergoing plastic surgery.

However, he’s never listened to anyone but himself – and it’s safe to say that he’s done great as a result. According to Celebrity Net Worth, Scott “Carrot Top” Thompson has a net worth of around $70 million.

As he’s been in Las Vegas since 2005, he also bought himself a $1.9 million home, according to Celebrity Detective. According to the site, the house of 4,300 square feet of living space, with a swimming pool, three bedrooms, and two-and-a-half baths.

Another celebrity who’s had a permanent residency in Las Vegas is singer Celine Dion. And in fact, it turns out that Carrot Top’s house has something in common with the legendary singer.

According to the 2015 Esquire feature, Carrot Top’s house was constructed “by the same builder who built Céline Dion’s palatial desert estate.”

The site added that “in fact, materials left over from the larger job, including pilfered floor tile and the kitchen’s rustic beams,” got a spot in his home.

Carrot Top came from nothing and created himself an empire.