According to recent information from Brittney Griner’s attorneys, the WNBA star’s whereabouts are currently unclear. As previously reported, Griner was found to have less than a gram of hash oil in her luggage and was therefore given a 9-year prison term in Russia.

Her attorneys have recently disclosed that Griner was sent to an undisclosed jail colony after her appeal was rejected. According to a statement from Griner’s attorneys Maria Blagovolina and Alexander Boykov, “We do not have any knowledge on her specific current whereabouts or her final destination.”

#BrittneyGriner is reportedly being transferred to a penal colony but her destination is currently unknown to her legal team and family. We lift up #BG. #FreeBG pic.twitter.com/1fxywSF2ql

When Griner arrives in the detention centre, which is described as a prison camp where inmates are housed in barracks and made to perform labor, her lawyers said they anticipate to learn of her eventual location by letter.

It is unclear when anybody will be informed of Griner’s whereabouts, however. As Axios notes, “claims of sexual abuse, unclean conditions, and even torture have surfaced in recent years” from inmates being imprisoned in detention camps, which make up the vast bulk of Russian prisons.

According to Griner’s representative, Lindsay Colas, “BG’s health and well-being remain our top priorities.” “We ask for the public’s help in continuing to write messages and express their love and concern for her as we struggle through this extremely difficult phase of not knowing exactly where BG is or how she is doing,” the statement reads.

Cherelle Griner said during the Glamour Women of the Year Awards on Tuesday night that her wife, Brittney Griner, was being held abroad in a Russian prison.

When asked about the emotional toll that losing Griner has had, Cherelle remarked, “I’ve spent the last eight months riding waves of grief and, to be honest, absolute disbelief.” “I find it hard to comprehend that I’m here in front of you today without my favorite person, my greatest love, or my safe haven.” 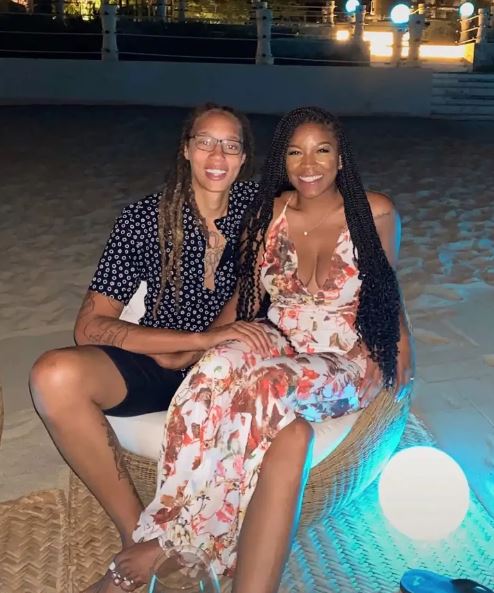 The WNBA player was detained by Russian authorities in February 2022 after airport security discovered marijuana cartridges in her luggage. She was imprisoned for months, waiting patiently for her day in court, ignorant of what was ahead.

However, she was found guilty of narcotics possession and given a nine-year prison sentence when she finally presented her case to a Russian court over the summer.

The American government has been working hard to bring the basketball legend back to its land ever since the event. Attorneys requested an appeal of her charges following her conviction, but it was later turned down. Nobody knows for sure yet when the WNBA player will go back home.

Cherelle also delivered a moving speech during the wedding that was devoted to her wife. “Babe, I miss every aspect of you. In particular, your friendship,” the law school alumnus said. “I find myself reaching for my phone, just to put it down again because I only want to hear your voice,”

“Once you get home, I’ll probably talk in your ear nonstop. I am aware that you are suffering right now, baby. To experience the love that is all around you, I wish you were here. You have not been forgotten, she added. “So, champ, keep your head up. This will also pass. I adore you, and I can’t wait until I can give you a big hug! Love, Relle”

Cherelle also mentioned how much Griner values the support of his followers all across the world. The basketball star is inspired by fan letters as she waits to return to the United States. Her wife claims that it significantly affects her ability to maintain her positive attitude.

“She is not at all fine, and there is little I can do to make her feel better. But despite the fact that I cannot bring her back, I firmly think that words have the power to change lives,” remarked Griner’s wife.