Amber Heard has shared an unseen text conversation in which she alleges Johnny Depp “done a number” on her.

The recently revealed message was created in 2015, just after the two celebrities married. After losing a multi-million dollar defamation battle against her ex-husband earlier this month, Heard has given over a vast amount of “evidence” to NBC’s Dateline.

She told Savannah Guthrie of NBC News that she had a lot of “proof” to disclose that would back up her claims that Depp was physically violent to her during their turbulent relationship. 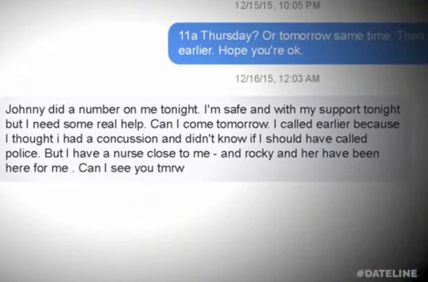 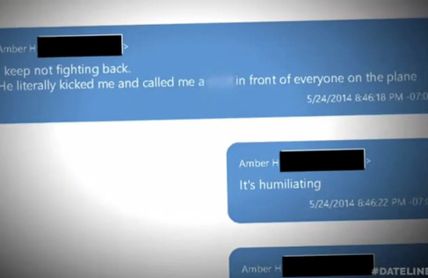 Among the materials were text messages allegedly sent by the Aquaman actor to her father and therapist, which she revealed for the first time.

In one text – dated 16 December 2015 – Heard claims to have text her therapist saying: “Johnny did a number on me tonight. I’m safe and with my support tonight but I need some real help.”

“Can I come tomorrow. I called earlier because I thought I had a concussion and didn’t know if I should have called police. But I have a nurse close to me,” the message concludes.

Another message – allegedly sent from Heard to her father in 2014 – describes a violent altercation on an airplane.

“I keep not fighting back. He literally kicked me and called me a [redacted] in front of everyone on the plane. It’s humiliating,” the text reads.

Alongside the texts, Heard also unveiled notes that she claims to be from her therapy sessions. “There’s a binder worth of years of notes dating back to 2011 from the very beginning of my relationship that were taken by my doctor who I was reporting the abuse to,” she told Guthrie.

Friday on a special edition of #Dateline at 8/7c on @NBC, Savannah Guthrie’s exclusive interview with Amber Heard. pic.twitter.com/TW9pZWlnGa

The therapist’s notes contain descriptions of how Johnny Depp allegedly beat his then-wife, including an explicit reference to a time he “hit her, threw her on the floor.”

Judge Penney Azcarate – who oversaw Depp and Heard’s court case last month – dismissed the binder of therapy notes as “hearsay” and barred Heard’s lawyers from submitting it as evidence.