A beloved crossing guard in Kansas City, Kansas was fatally hit by a car on Tuesday, saving two children in the process.

Bob Nill, 88, had worked as a crossing guard at the Christ the King Parish School for five years, known fondly by students as “Mr. Bob.”

“He stopped [two kids], and they listened, thank God, but then he, of course, was the victim,” school principal Cathy Fithian told KMBC 9.

According to Fox 4, witnesses said that Nill pushed the children back as the car zoomed through the crosswalk, putting them out of harm’s way.

Nill’s nephew Randy told the outlet that his uncle’s actions weren’t out of the ordinary for him.

“What my Uncle Bob did for just getting little kids across the street seemed probably trivial to some people, but for him, it was a really important job, and now, we really know how important it was,” Randy said. “He maybe saved some lives.”

Before Nill retired, he worked in banking and served in the Coast Guard, according to Fox 4.

Randy said that he turned to his crossing guard job in retirement as a way to stay busy and give back to the community.

“This was something I think he felt like he could help children and help himself feel good about what he was doing,” Randy said.

“We would like to give you an update on our crossing guard, Mr. Nill. Our hearts are heavy as we inform you of his passing.

Please continue to keep Mr. Nill and his family in your prayers as well as the students, parents, and teachers who witnessed today’s accident,” the school said in a statement on Facebook on Tuesday.

“Also know that Mr. Nill is a hero. He stopped two of our students from crossing the road as the car approached.” 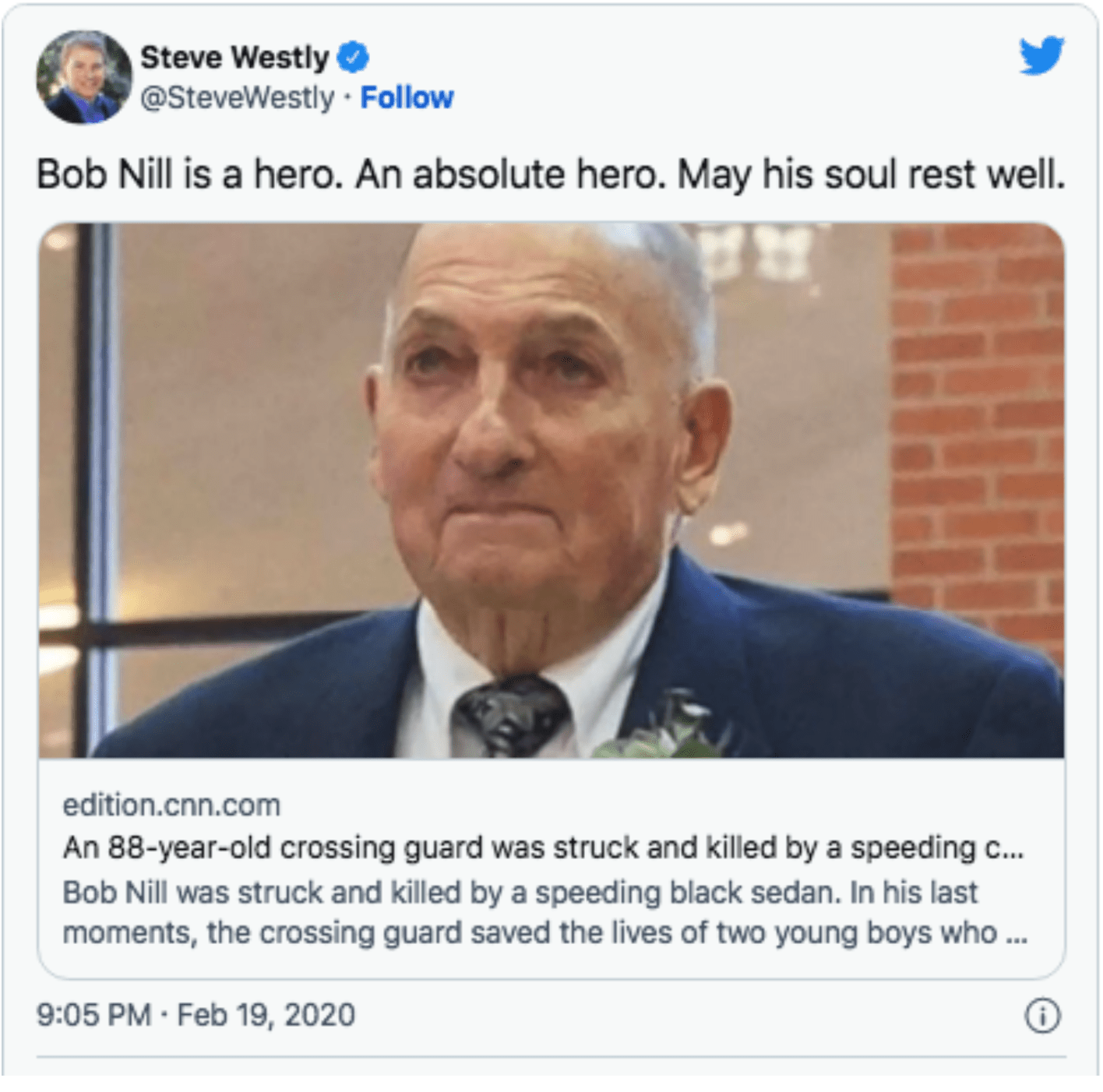 Neighborhood resident Elizabeth Germany told Fox 4 that even though her grandchildren attend a different school, Nill would still help them get to school safely.

“He was a very dedicated at what he did. Cared about the kids. Made sure he stood out there with that sign and made sure they were safe to cross,” she said.

“My prayers and thoughts go to the family. It’s sad. It really is.”

“I offer my deepest sympathies to the family of the crossing guard, and I offer our gratitude on behalf of our residents for his selfless sacrifice in protecting our children,” said KCK mayor David Alvey in a statement to Fox 4.

“The Unified Government staff extends their heartfelt thoughts and prayers to the employee’s family, friends, and those affected by this tragedy,” Alvey added.

The KCK police department did not immediately respond to PEOPLE’s request for comment.