While performing the Backstreet Boys’ tribute to their late brother Aaron, Nick Carter sobs on stage.

According to TMZ, Aaron Carter was found dead in the bathtub of his California home on Saturday afternoon. Fans are aware that the 34-year-old struggled with drugs and mental illness in the years leading up to his death.

Aaron’s older brother, Nick Carter, a member of the Backstreet Boys, is now grieving his brother’s passing and was seen sobbing on stage on Sunday night. 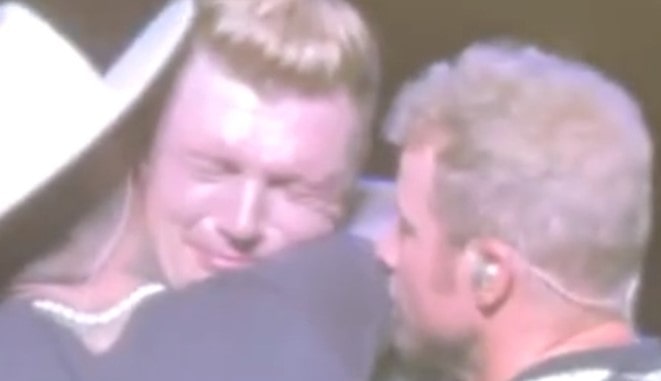 On Sunday night in London, England, the Backstreet Boys performed “No Place” while images of Aaron Carter flickered on a screen behind them.

Nick was being comforted by the other band members while Kevin Richardson spoke to the audience.

He explained, “We just wanted to find a moment in our program to commemorate him since we just lost one of our family members yesterday and we’ve had heavy hearts tonight.”

Aaron Carter, Nick’s younger brother, passed away yesterday. He belongs to our family.

This song is dedicated to Aaron Carter, our younger brother. May he find eternal peace,” Howie concluded.

Although Nick is going through a really trying moment right now, fans were happy to see him being so supported by his bandmates.

Dolly Parton has announced that she will stop traveling and spend more time at home with her husband.
She told her family what had happened, adding that “love doesn’t know math!”