You never know when your actions will have a significant impact on someone’s life.

When Jeff Louis, a delivery driver for Gionino’s Pizza in Mentor, Ohio, was overwhelmed with kindness, he was merely doing his job.

Louis was making a routine delivery to Life Point Church in Mentor when he was surprised to see the congregation line up and begin giving him a massive tip. 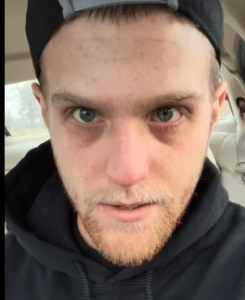 Outside of the chapel, the 22-year-old was so moved that he made an impromptu reaction video. He later uploaded the footage to his YouTube account, which has roughly 700,000 subscribers.

Pastor Ken Wright of Life Point had the thoughtful notion of leaving a meaningful tip for the driver.

“Yeah, I figured I’d give him a $100 tip.” Wright told WKYC.com, “It’s the holiday season.” “You know it was impromptu.” It has just occurred. They began to form a line, everyone with their own cash tip.”

When Louis recounted the events on his YouTube page, he became teary-eyed and choked up. It was more than a kind gesture for Louis, who is in the midst of drug rehabilitation; it gave him hope to keep going and stay on track. After all, was said and done, the congregation of the church had handed him nearly $700.

“It simply astounds me that people who don’t even know me wanted to help me out so much,” Louis said in his reaction video.

Louis ended the film with a single word to describe this unexpected act of kindness: “Blessed.”

Take a look at the reaction video below: