HUMANS HAVE ALWAYS FELT at home in the trees. It is, after all, where we came from a long, long time ago. But even in the modern age, trees play a very important role in our lives. People who live near trees are known to have better physical and mental health, and the presence of trees is important for preventing climate change.

Naturally, as we learn more about our relationship to trees and our planet, we’re realizing we want to spend more time in and around them. More and more people are building creative treehouses for use as hotels, restaurants, teahouses, or occasionally as a means of communicating with extraterrestrials (seriously! — see the Beach Rock Treehouse below). Here are some of the coolest treehouses in the world. 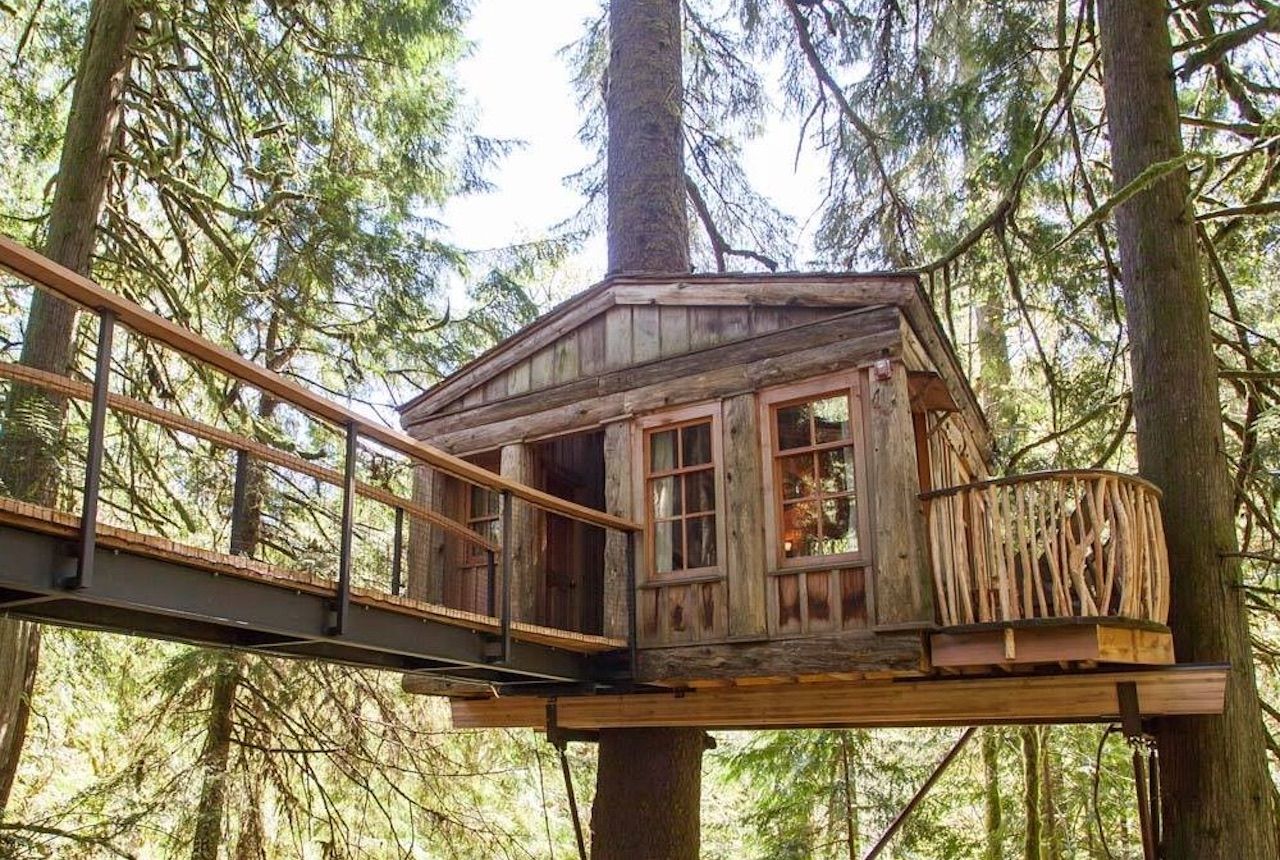 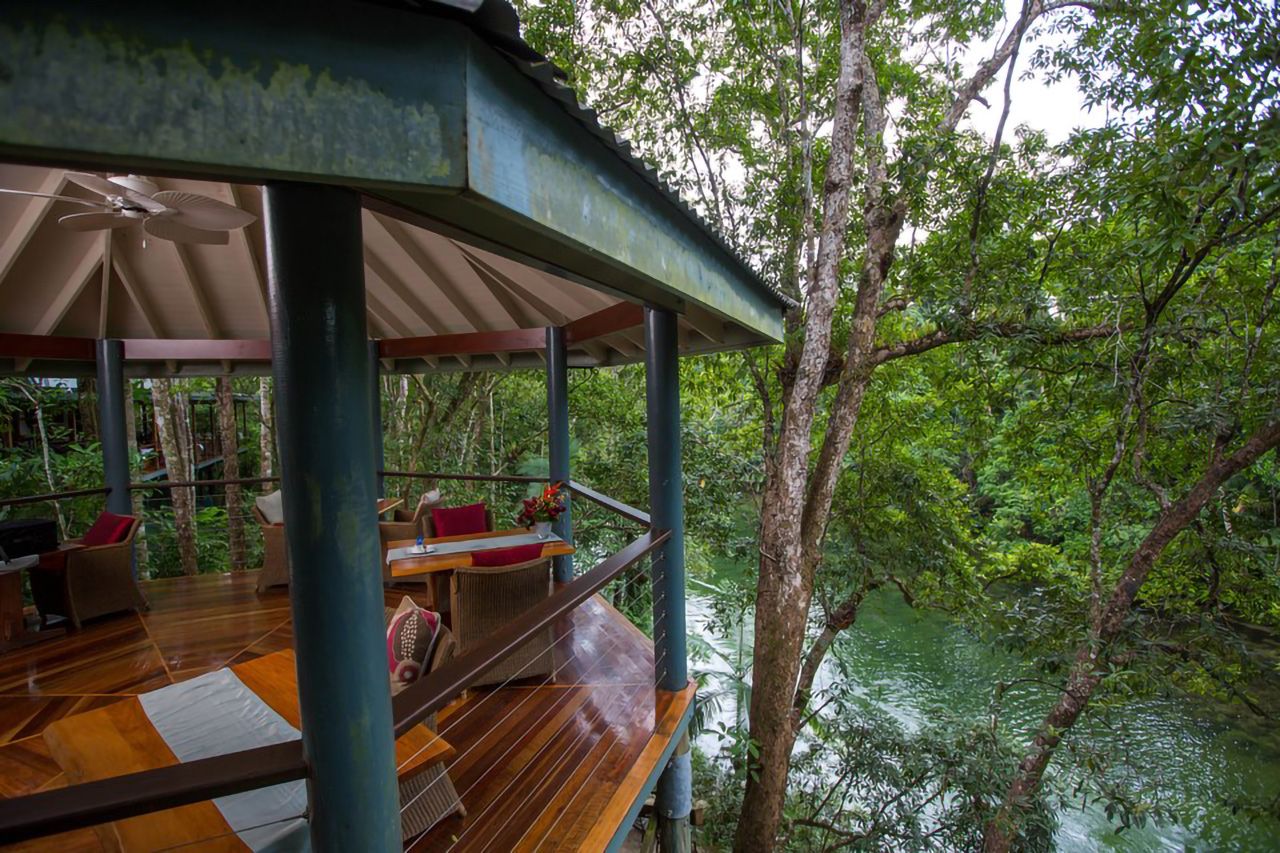 Silky Oaks Lodge is a luxury resort in the World Heritage-listed Daintree Rainforest — recognized as the oldest rainforest in the world — outside Queensland, Australia’s Mossman Gorge River. 40 contemporary treehouses unite around a treetop, open-air restaurant and bar overlooking the river. Silky Oaks (and its onsite spa) will reopen post-renovation in late 2021.

The Yellow Treehouse Restaurant near Auckland, New Zealand, is pod-shaped, built around a 130-foot-tall redwood tree. It doesn’t serve as a regular restaurant — it’s only open for special events. That being said, you can book it for you and 30-50 of your closest friends and family, if you have $3k to spare.

Finca Bellavista is a sustainable treehouse community in Costa Rica’s rainforest canopies, and it’s probably the closest thing to a quintessential rainforest getaway that there is. You can purchase a parcel to build your own treehouse on, or just crash there for a few nights. They let you zipline between treehouses. There’s miles of hiking trails. There’s waterfalls and rivers to swim in. Birdwatching, garden tours, hammocks — it’s quite possibly the coolest place on Earth. 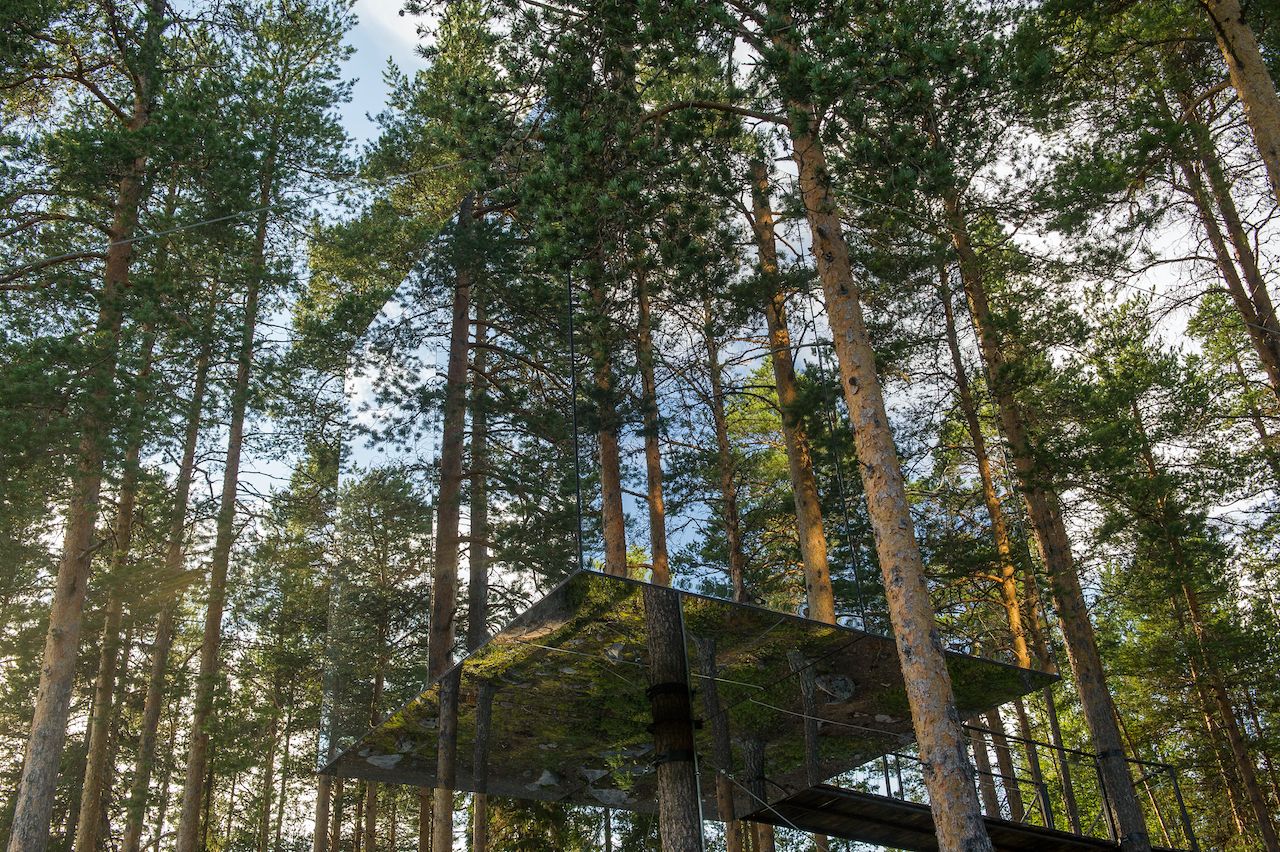 The second-to-none Treehotel in Harads, Sweden, has six absolutely incredible treehouse rooms — from the bizarre, alien-themed UFO room to the almost-invisible Mirrorcube, it takes your weirdest ideas about treehouses and runs with them. You’ll spend evenings dining privately (local fare only, naturally), nights lit up by the northern lights, and mornings your imagination running as wild as the landscape.

On the island of Hainan in the South China Sea, the Nanshan Treehouse Resort features three large, multi-level treehouses that can house up to 20 people. Furnishings are minimalist, the prices budget-friendly, and the treehouses themselves evoke a style similar to birdhouses. Right off the coast, the resort’s also near a Buddhist “theme park,” with a number of pagodas and temples.

The Teahouse Tetsu is exactly what it sounds like: a teahouse in a tree. It was designed by architect Terunobu Fujimori and sits up in a cypress tree among the pink cherry blossoms of Hokuto City, Japan. It’s one of ten structures in this eclectic, artistic village, which visitors experience like an interactive museum. 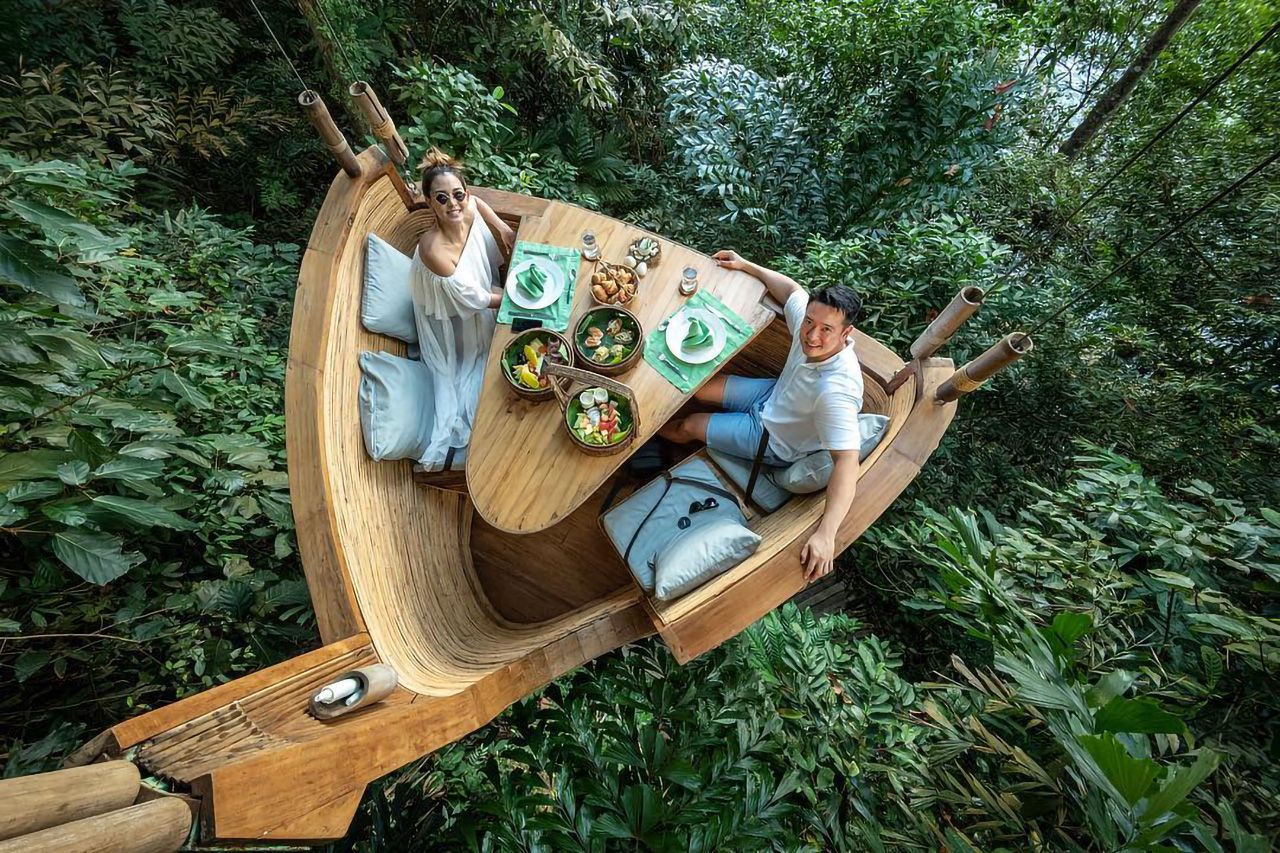 The Soneva Kiri Resort on Koh Kood, Thailand, has a one-of-a-kind feature: “treepod” dining. Basically, you enter the pod on the jungle floor, and then it’s hoisted into the canopy, where you’re served a meal by a waiter — and an acrobat — on a zipline. The views stretch over the ancient forest to the sea, and options range from breakfast to dinner to high tea. 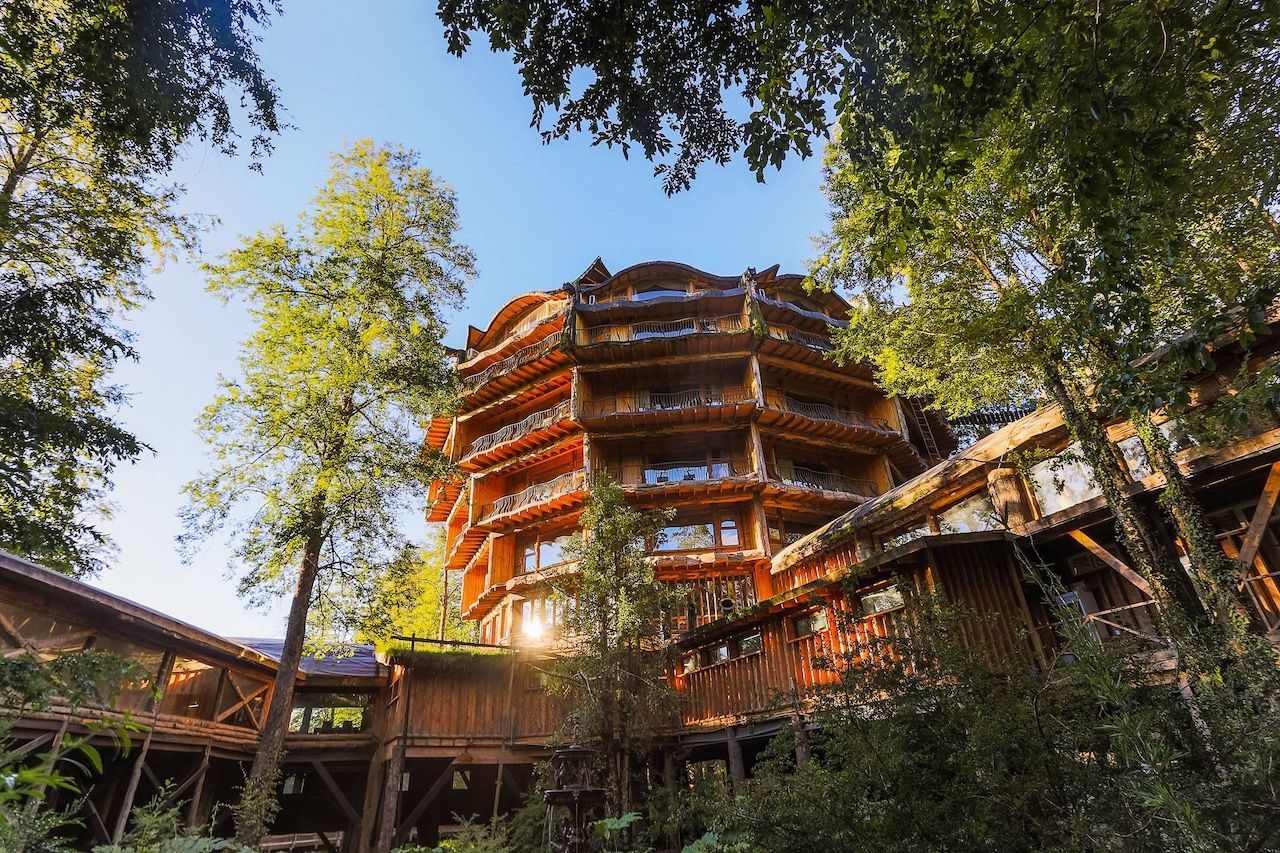 The Nothofagus Hotel is among the treetops of the Huilo Huilo Biological Reserve in Chilean Patagonia. With 55 rooms, this just might be the largest treehouse complex in the world. You’ll also find hot springs, a spa and restaurant on site, and opportunities for hiking, biking, and horseback riding.

Designer Lukasz Kos’s treehouse in Lake Muskoka, Ontario, is named the 4Treehouse. It was designed to minimize its impact on the surrounding trees. With three levels to this treehouse, it looks like a Japanese lantern when lit up at night, hanging heavy in the pine air. If you’re looking for a wintery treehouse, this one might be it. 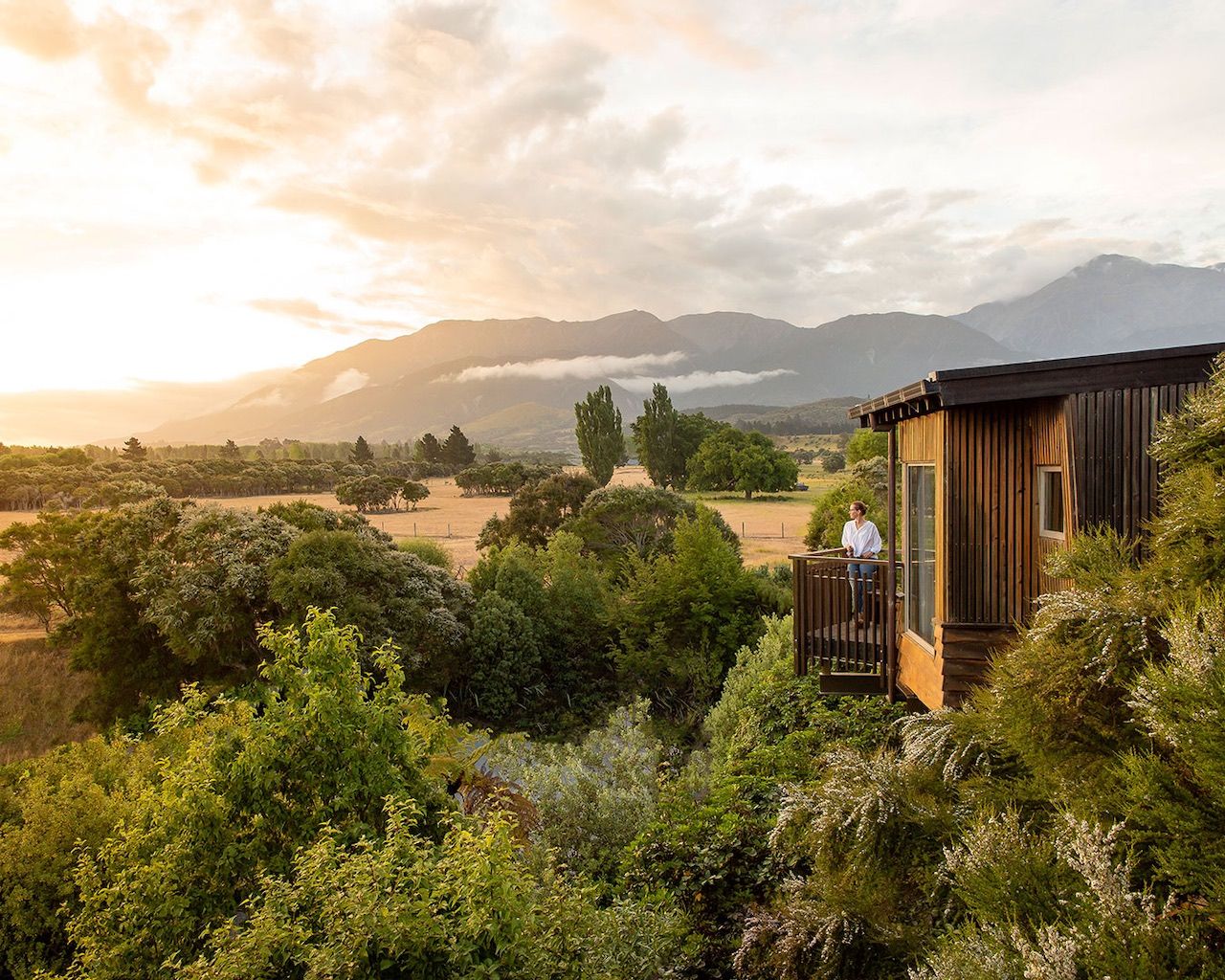 Hapuku Lodge is a luxury resort in Kaikoura, New Zealand, featuring a number of 30-foot-tall treehouses that overlook the Kaikoura Seaward Mountains and the Mangamaunu Bay. The contemporary treehouses are big enough for couples or for families, and you’ll spend your days fishing, encountering dolphins, sea kayaking, and swimming with the seals. 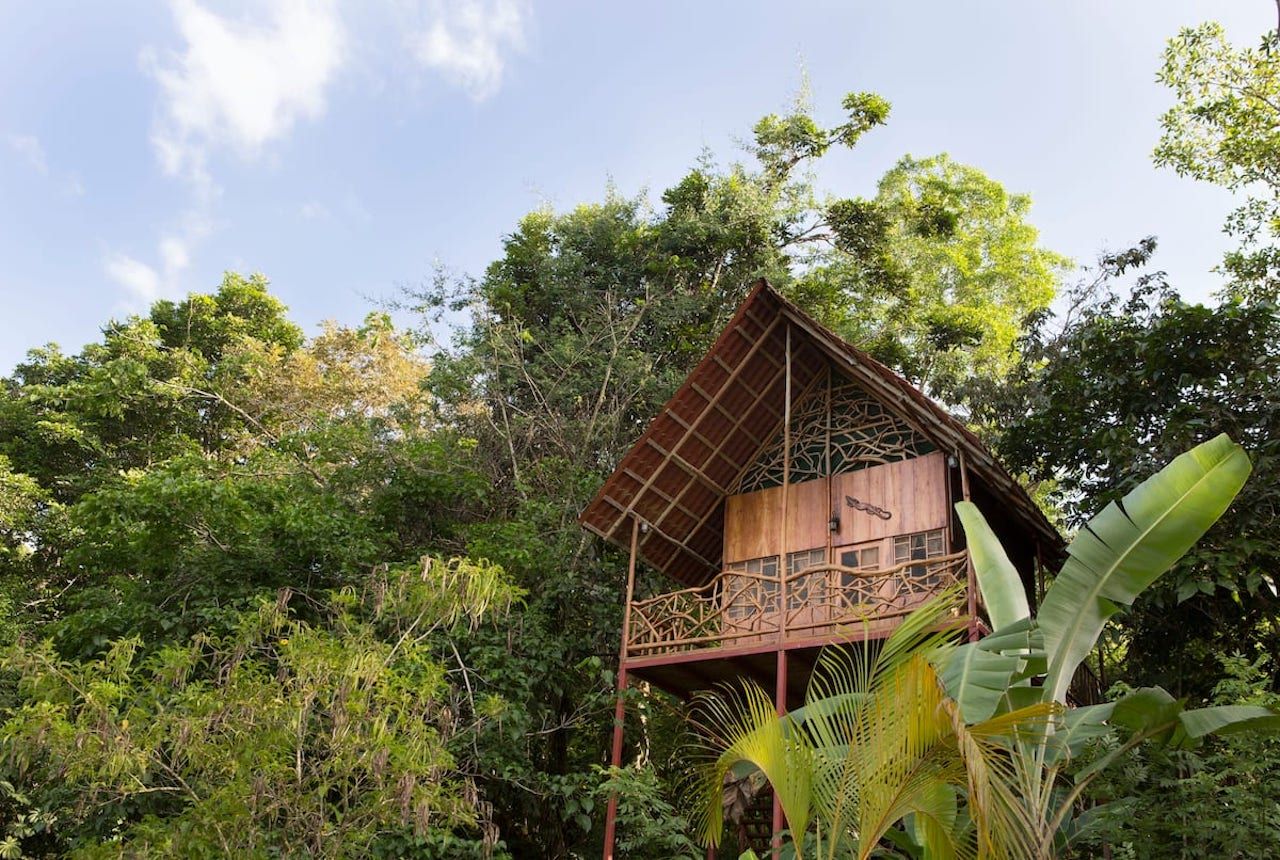 This treehouse with a wraparound balcony is in Alajuela, Costa Rica, and is adjacent to 15 natural hot and cold springs. Part of the Bio Thermales natural resort, it’s a short drive from the treehouse to Costa Rica’s famous Volcano Arenal. It’s currently $112 a night.

Burning Man has given the world a lot of awesome things, but it tends to burn those things at the end of the festival. Mercifully, the awesome 40-foot-tall Steampunk Treehouse, created by Sean Orlando and Kinetic Steam Works for the 2007 festival, was relocated to the Dogfish Head Brewery in Milton, Delaware, where it’ll stay permanently. Unfortunately, the interior is off-limits to the public; Dogfish employees use it for creative brainstorming sessions. But you can still view it!

The Three Story Treehouse is an attraction in British Columbia’s Enchanted Forest Theme Park. It includes fairy-tale characters and nature walks, but the highlight of the park is clearly the treehouse. The largest in the province, the treehouse is set amongst gigantic red mushrooms, with a yellow staircase and multiple levels. 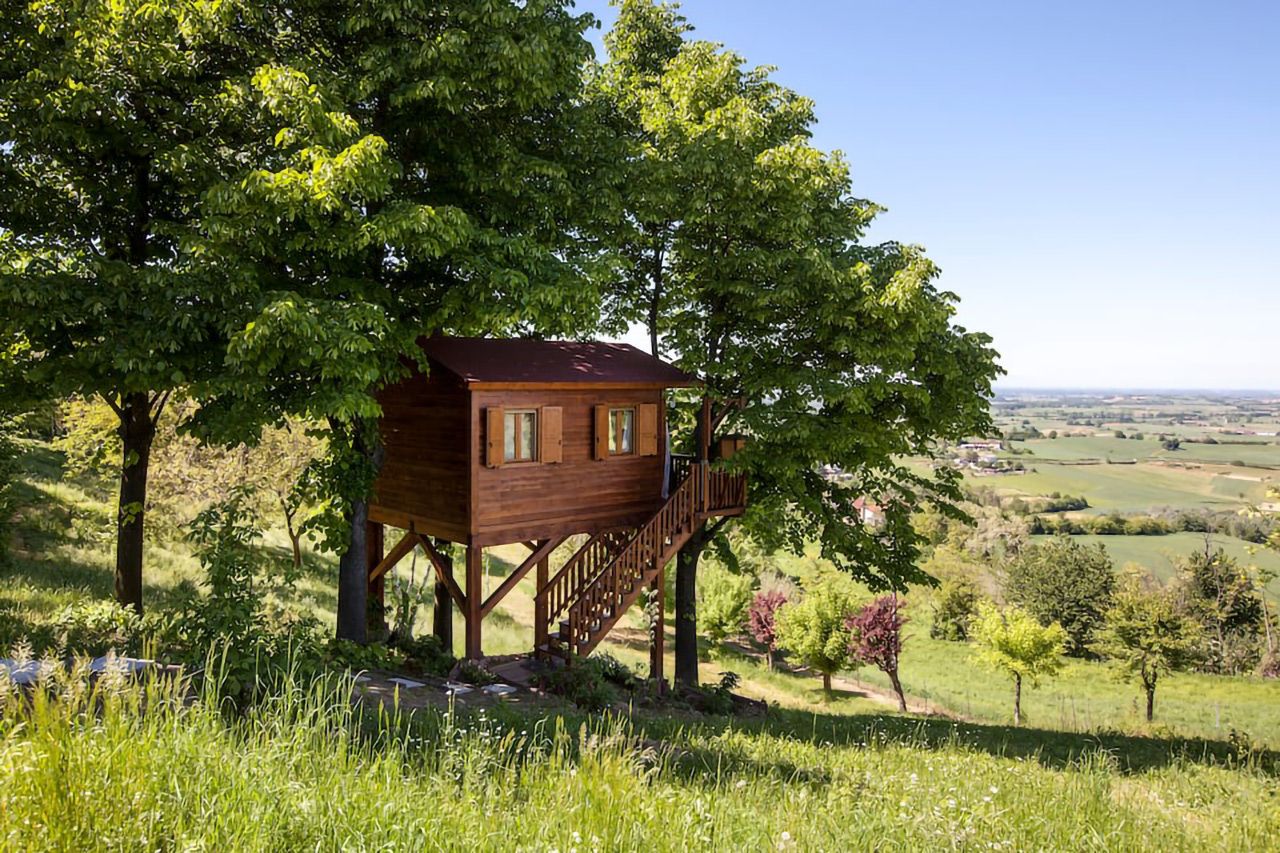 Another beautiful treehouse available on Airbnb. This one, in Alessandria, Italy, offers free wifi and access to a 19th-century wine cellar. The clean white setup is set amongst linden trees with views over the hills and the massive — 200,000 square feet! — garden. Walking and biking paths are easily accessible for guests.

This bizarre treehouse in Beach Rock Village in Okinawa, Japan, was built by Kobayashi Takashi with the intention of communicating with beings from outer space. It’s said to be one of the highest treehouses in the world, with multiple platforms for viewing and a plexiglass top. The inside is said to change color! 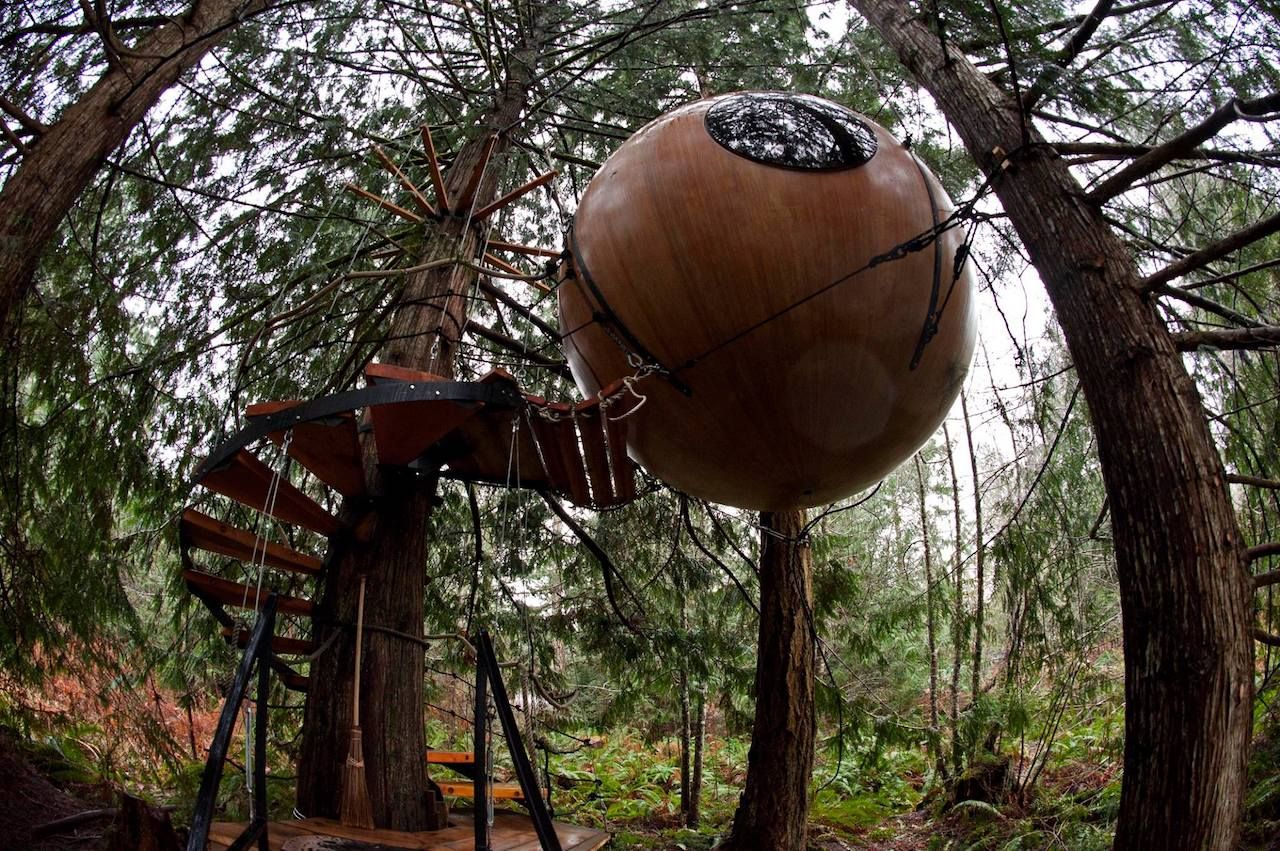 Free Spirit Spheres are available for rent (and available for purchase, if that’s your speed) in Qualicum Beach, British Columbia. Suspended from webs of rope, the spherical hotel rooms are accessible through spiral staircases and small suspension bridges. Some spruce, some fiberglass, some painted with Indigenous murals, each combines luxury with eco-friendly minimalism.