While the likelihood of having twins climbed by 72 percent between 1980 and 2018, it is still quite uncommon. Twins account for about 33 out of every 1,000 births.

What are the odds of having identical twins? Identical twins account for about three or four out of every 1,000 births. So, once again, it’s a rare occurrence.

Savannah Combs, 23, was overjoyed when she learned she was expecting twins. Then she discovered another another rarity: they were both born with Down syndrome. 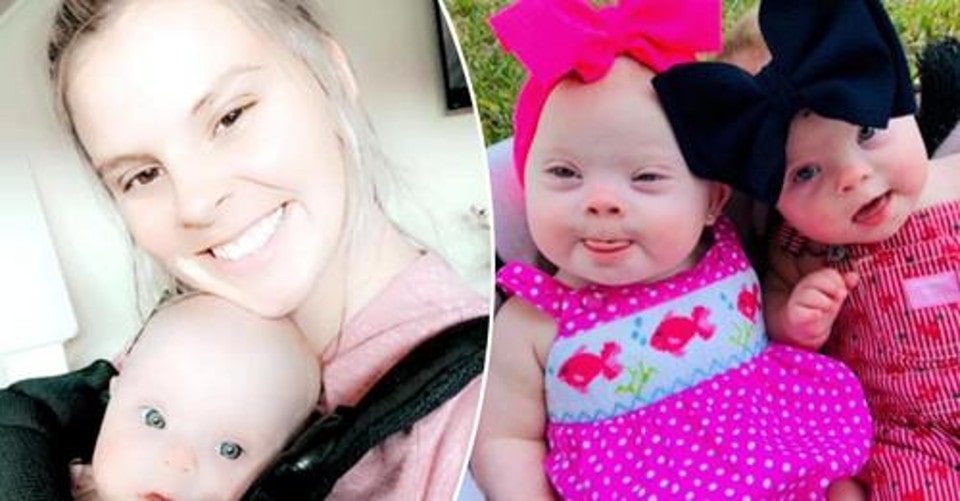 Of course, the news was upsetting. Savannah and her husband, Justin Ackerman, were well aware that some people would look down on her and her children due to their predicament.

Savannah, on the other hand, sees them as extremely valuable.

“What they have is extremely rare,” she told News4JAX. “But they’ve been my little gems.”

Savannah, who is from Middleburg, Florida, documented her postpartum experience on TikTok with her kids Kennadi Rue and Mckenli Ackerman, and they immediately acquired a following.

Savannah said in one of her videos that she was told to abort her infants because they wouldn’t survive.

She made the decision to keep them and give them a shot.

Savannah added, “Every [prenatal] appointment they were alive was a blessing to me.”

Her spouse was gone at boot camp when she found out they both had Down syndrome.

Savannah was 29 weeks pregnant when she went to the hospital and gave birth to her two daughters. Kennadi Rue and Mckenli Ackerman, identical twin daughters, were born on May 12, 2021.

The twins were born two months early, so they had to spend many weeks in the NICU before being released.

“They were called mono di twins because they had their individual sacs but shared the same placenta, which meant they’d be identical,” she explained.

“Mo di twins are quite uncommon.” When you add Down syndrome to the mix, it’s like one in every two million.”

Savannah claims they are just like any other youngster, despite their uncommon illness.

“Like I said, it may be a step behind schedule, but they’ll get it done.” These youngsters are fierce tiny things who are also happy little things, as I’ve discovered.”

Savannah posts wonderful updates on TikTok as each youngster continues to reach milestones.

“I’m going to tell them that they’re just like us, and that if they set their minds to it, they’ll get there.”

♬ original sound – Down With The Ackerman Twins

Some people, however, feel compelled to insult Savannah and her family. As a result, the young mother has had to deal with some really insensitive social media users.

One person wrote to the mother, “I wouldn’t want those babies; if mine came out like that, they would be straight up for adoption.”

Savannah, on the other hand, had the ideal response, which she published on Facebook.

“It’s a good thing they weren’t born to you, but they were born to me,” I said. God understood what he was doing when he chose the right parents for these children who would love them no matter what.”

Beautiful young ladies. Anyone who claims differently is simply being cruel.

These people are the most valuable and caring people on the planet! Please spread the word about this touching tale on Facebook.