The basketball star is detained in Russia, far from her teammates and loved ones. But there are signs she has held on to her fighting spirit

For five months, Brittney Griner has been all but silenced.

Outside of sports, Griner has often used her voice to galvanize and help the masses.

When American cities were filled with protests in 2020 after the police killings of Breonna Taylor and George Floyd, Griner used her fame to help bring attention to systemic issues that are often faced by marginalized communities.

In 2019, she used her platform to raise tens of thousands of dollars for the victims of Hurricane Harvey, which devastated her hometown of Houston, Texas.

And she would often partner with the Phoenix Rescue Mission to provide shoes for the homeless in Arizona’s capital, where she is an eight-time WNBA All-Star with the Mercury.

But since being detained less than a week before Russian troops invaded Ukraine, we have barely heard her voice, aside from a few statements at her trial (Griner says she did not intend to bring drugs into Russia and that her rights were not fully explained to her).

Instead, photos have replaced words and served as Griner’s primary tool of expression, even as Wednesday’s report of a potential prisoner swap between the US and Russian governments offered a rare note of hope amid her months-long detainment.

The most striking image came this week and summed up both her spirit and the heartbreak of her separation from her loved ones.

Griner, trapped behind the bars of a Russian holding cell, gave a subtle smile while holding photos of her wife, Cherrelle, best friends and teammates.

A few weeks prior, she was photographed holding another picture of WNBA players wearing her No 42 jersey at this year’s WNBA All-Star game.

“Like we say, we are the most unified league in the world, honestly, and wearing the jerseys was a statement to show that we are BG,” A’ja Wilson of the Las Vegas Aces said in response to the league’s decision to honor Griner. 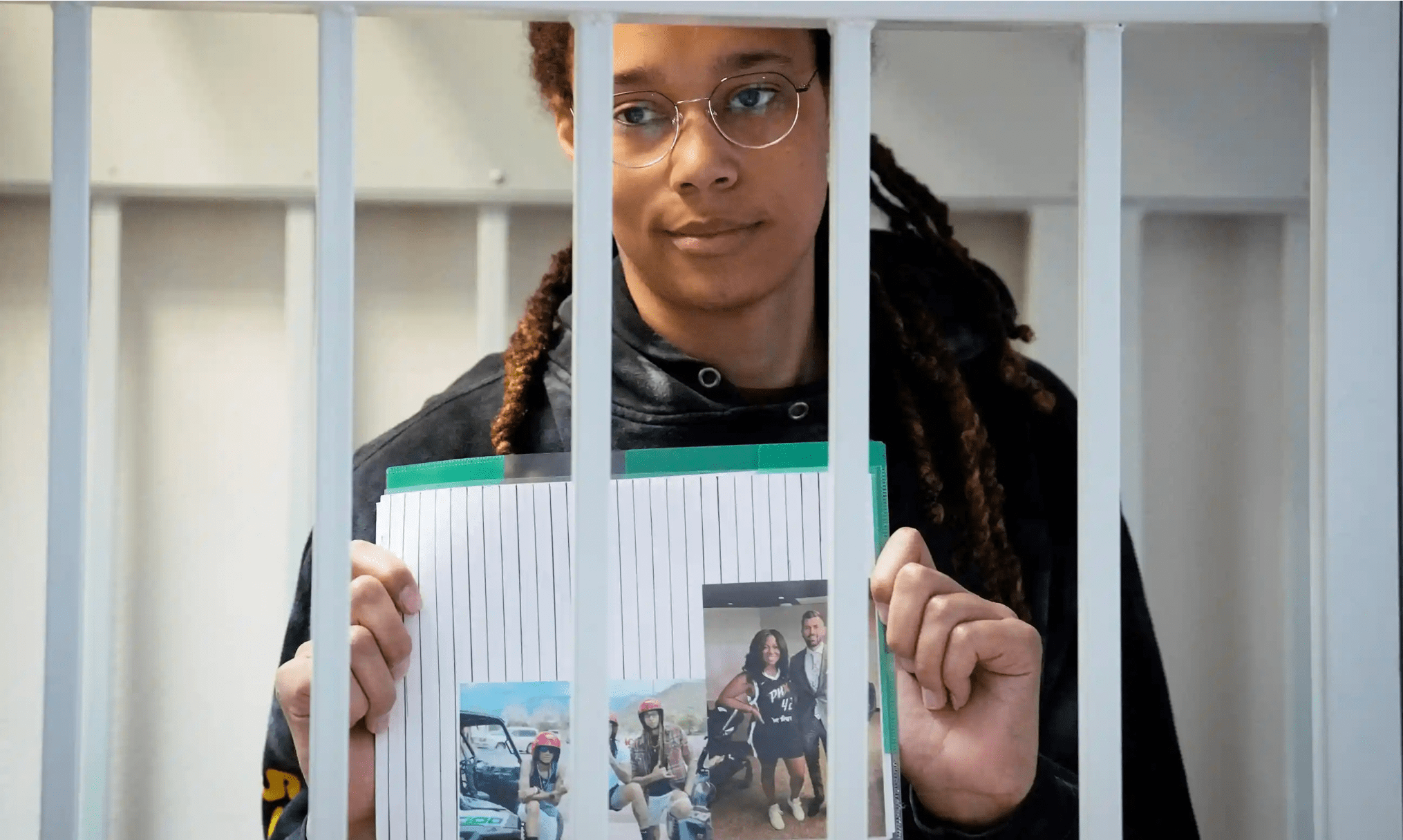 Brittney Griner has held photos of those close to her during court appearances in Russia. Photograph: Reuters

Griner’s decision to use photos as a means of expression reveals a deeper message about the uncertainty of her future.

With her long-term freedom in jeopardy, each photo that she holds serves as a lifeline. Even though she is detained and isolated in a foreign jail, she’s not experiencing this ordeal alone.

There are loved ones, teammates and fans hoping for the best outcome as she faces up to the possibility of 10 years in a Russian prison.

In the moments before she was photographed with the picture of her wife and best friends, Griner briefly spoke to an ABC News reporter. She wished her wife good luck on her upcoming bar exam. When asked if she had any complaints, Griner responded, “no complaints”.

During her testimony in court Griner has expanded on her defense attorney’s claim that the cannabis oil was used for medicinal purposes.

It’s unclear if the judge can be swayed or if fairness was ever an option, given that most experts in the US view her detainment as a political ploy by the Russian government during a time of heightened tension between Washington and Moscow.

But Griner is a fighter who has always used her skills to overwhelm opponents on the court while using her voice to fight for justice and help those in need off it.

The photo shows Griner is still fighting, she’s still finding ways to connect with the masses and those she loves, and she’s using her voice even if she can’t speak out loud.

At this moment, when circumstances have made it so hard for her to speak directly to the world, a photo is worth more than words.

Even though she was acting normally, everyone she passed was making fun of her