It’s never a dull year for the British Royal Family.

Even when things are seemingly running smoothly on the surface – or as smoothly as the world’s most famous monarchy can run – it would appear that there’s always plenty of drama unfolding in the background.

The undeniable popularity of Netflix’s The Crown is testament to the sheer weight of people who are interested in what might be going behind the closed doors of Buckingham Palace and the various other royal estates.

Of late, it’s been a rocky road indeed for Queen Elizabeth and her brood, and not just because of the COVID-19 pandemic that gripped the entire world for the better part of the last two years.

No, in that time the British Royal Family haven’t only been forced to content with coronavirus, but also the death of Prince Philip, Duke of Edinburgh, a string of serious allegations lodged against the Queen’s son, Prince Andrew, and the high-profile exits of Prince Harry and Meghan Markle from the royal fold.

The Queen’s serene smile in contrast to Prince Louis’ expression is hilarious😭#PlatinumJubilee pic.twitter.com/flFqB6PLit

One can only imagine the strain such matters have placed on Queen Elizabeth who, at 96, is now celebrating an incredible 70 years on the throne.

That’s right, arguably the most popular monarch on the planet has been doing her thing for longer than the majority of us have even been alive. During her time she’s encountered virtually everything a queen might be asked to, and then some, but it would appear – at least if certain reports are to be believed – that Father Time is finally catching up to her.

In any case, the jaw-dropping longevity of Her Majesty’s distinguished reign is celebrated this week with her Platinum Jubilee, a four-day event to mark 70 years since she was crowned.

Yes, by all accounts London is currently the scene of quite the party, though the Queen herself pulled out of a service at St. Paul’s Cathedral after experiencing discomfort while watching Thursday’s parade at Buckingham Palace.

The Royal Family’s balcony appearance symbolises the continuation of the monarchy. My favourite picture so far today is Prince Louis talking to his great-grandmother, The Queen.

Along with half the population of the United Kingdom, gathered to celebrate Queen Elizabeth’s seven decades on the throne were many members of her family.

Given her years, that’s quite the family to assemble – Prince Harry and Meghan Markle even flew from California to take part in the celebrations. But it wasn’t just the highest-profile members – the likes of Princes Charles, William, Harry etc – who were present.

No, at least some of the supporting cast were also in attendance, including Princess Anne and Prince Edward, as well as the children of Prince William, Prince George, Princess Charlotte, and young Prince Louis.

There was much speculation as to the Queen’s decision to ultimately cut down the number of royals on the famous balcony of Buckingham Palace.

Forbes cite sources in saying that she wanted to keep the ‘guest list’ to working royals only, both to keep Prince Andrew out of the picture – his presence, in the wake of the sexual abuse allegations he has faced, would surely have provoked public outcry – but also to negate the need to consider Prince Harry and Meghan Markle. The couple infamously opened up to Oprah Winfrey early last year in a tell-all interview which exposed any number of hard truths the British Royal Family would surely have preferred to keep behind closed doors.

Other reports suggest the limit on family members present on the balcony has more to do with Prince Charles’s wish to slim down the monarchy with the future in mind.

Controversy over Her Majesty’s selection process aside, though, there can be no doubting who stole the show at the proceedings yesterday.

Prince Louis, 4, is the youngest of Prince William and Kate Middleton’s brood, but it would appear that he is determined not to be forgotten. Indeed, at this point his chances of ever sitting on the English throne look slim-to-none, but with that weight seemingly off his shoulders he’s in a much better position to have fun while in the public eye than his older brother, George is.

During the Platinum Jubilee flyover, Prince Louis produced any number of meme-worthy moments, continually pulling faces to let everyone know what he thought to the austere nature of the event.

The fact that he happened to be positioned precisely beside his stoic grandmother Queen Elizabeth made the shots all the more comical.

Of course, in doing so, Louis inadvertently confirmed what anyone in the world would have suspected and might well have said aloud: a 4-year-old standing on a balcony for any length of time before the eyes of the world is bound to end with the sort of hilarity that ensued.

Obviously his position as a leading member of the royal family means he has no choice; he has to be there. But one can at least spare a thought for how he must have been feeling. I mean, how would any of us have reacted if put in the same situation at four years of age?

Prince Louis Is an Instant Meme on Palace Balcony for Trooping the Colour — and Even Charms Granny Queen Elizabeth https://t.co/vzJVS8vjxu

Former White House Press Secretary Jen Psaki tweeted: “As a parent of a four-year-old not in line to the throne. Prince Louis, we see you and we understand you.”

Indeed, social media erupted in celebration of the young prince’s antics. It should come as no surprise that there was comedy gold to be found online if only one looked for it.

Prince Louis on Buckingham Palace balcony is a mood pic.twitter.com/DGkNKSd0Rj

Moreover, Prince Louis could be seen waving to the planes flying overhead in recognition of Queen Elizabeth’s monolithic contribution to her country. To the amusement of many viewers, meanwhile, he was also visibly reprimanded by his sister and mother a number of times.

As stated, Prince Louis doesn’t really have to consider the fact that he might one day be King of England, and so perhaps benefits from a freedom scarcely afforded to members of the royal family. That said, he is only four years old, so the chances are he’s most likely simply behaving in a manner that he sees fit, as all four-year-olds are wont to do.

In any case, he and his siblings represent the newest generation of the British Royal Family, so the world will undoubtedly look on with interest as they grow. It doesn’t seem like yesterday that we watched Princes William and Harry as children, developing under the guidance of Princess Diana’s careful eye before her and untimely death.

With that in mind, we can only imagine that William and Harry’s children will have the same principles of kindness, compassion and thoughtfulness instilled in them as Diana strove to impart.

As for Queen Elizabeth, there has been some speculation over whether the Platinum Jubilee may mark the last official engagement of her long reign. If that’s true, it would be a fitting send-off, even if the idea of her stepping down from her duties has become almost unthinkable at this point. 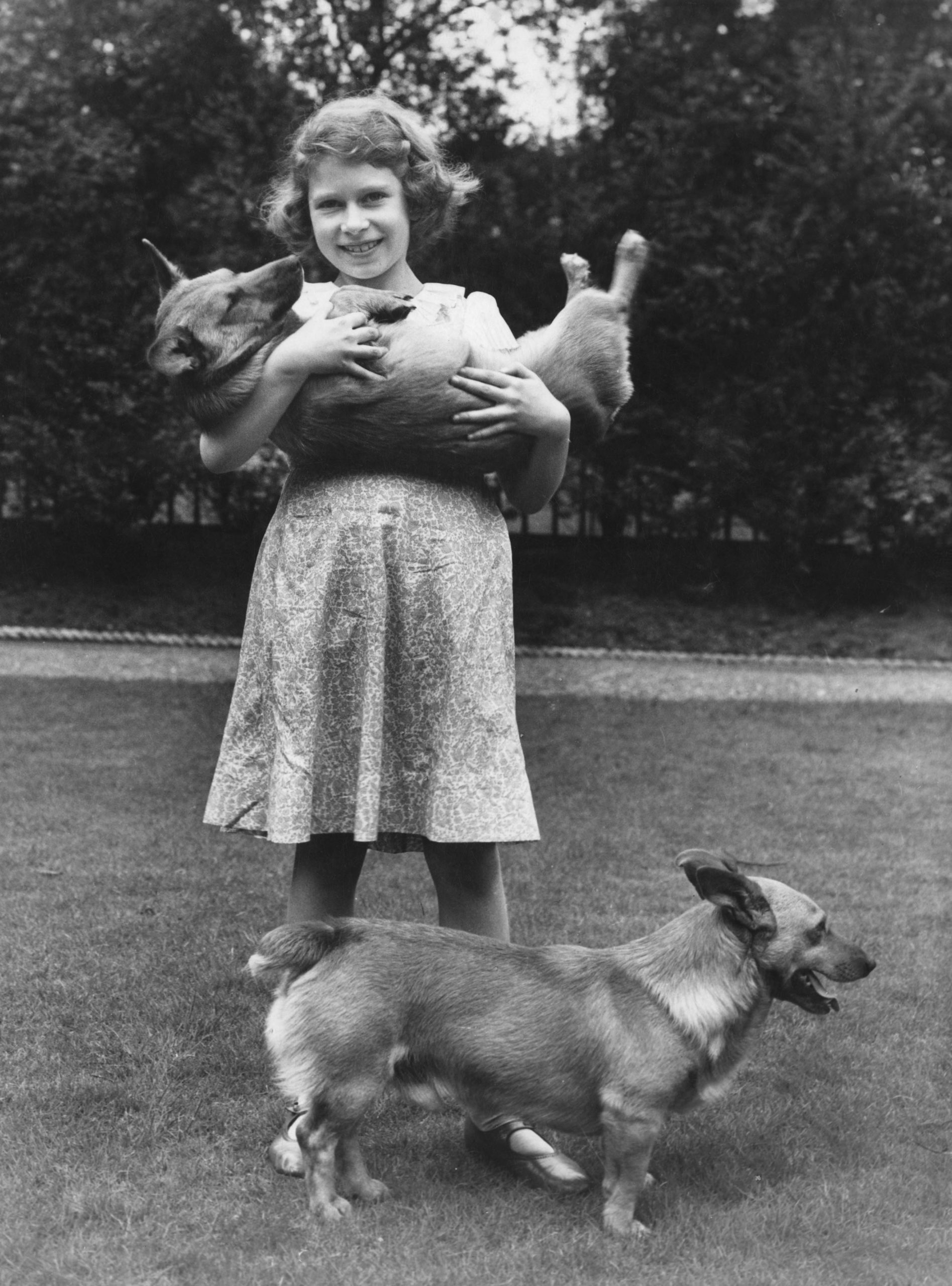 We mentioned previously that she was forced to skip a service at St. Paul’s Cathedral yesterday, and unfortunately such a decision has become commonplace for Her Majesty of late.

Whereas once she was a paragon of strength and stability, Queen Elizabeth is now 96 years old and weary from a lifetime of service. The loss of her long-time husband, Prince Philip, must surely have exacted a heavy toll, while illnesses and fatigue are standard fare for one who is nearing a century of life.

One thing has been made abundantly clear, and that’s that the Queen cannot be expected to rule according to the same hectic schedule as before. She’s been forced to cancel or forego any number of high-profile engagements over the past few months, with sources at Buckingham Palace stating that she should “not be expected” at any future public events ahead of time.

We’re happy that Queen Elizabeth was present while she was honored at her Platinum Jubilee. Her service to her country truly is unparalleled.

Meanwhile, leave a comment and let us know what you think to the Queen and her incredible reign.