It feels like half a lifetime ago that Donald Trump ruled the roost in the White House.

The opinion-splitting former POTUS shook the apple cart when he was elected president back in 2017, and his time as Commander in Chief was every bit as tumultuous and packed full of controversy as any of us had dared to expect.

Of course, the absence of Trump now that he’s no longer in power is something that’s very difficult to miss. His successor, Joe Biden, isn’t exactly setting the world alight with his performance in the Oval Office, but at the same time he can’t be accused of stealing the limelight in the same way Trump most certainly did.

Now over a year removed from his time as President, speculation continues to run rampant regarding a potential effort on Trump’s part to return to the White House.

Indeed, the 75-year-old has been spotted at several political rallies in different states, leading many of his supporters to believe he is tying his laces at the start of the comeback trail. At the same time, Trump has yet to confirm or deny if he will be running for reelection in 2024, with the evidence very much open to interpretation.

Yet earlier this week, former First Lady Melania Trump took part in her first interview since leaving the White House last year. In it, she insisted her husband’s administration had achieved a lot during its four-year tenure, and also dropped what others are perceiving to be a big hint about Trump’s political future … 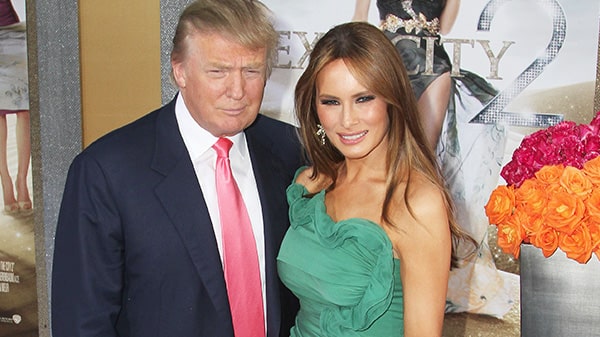 It’s certainly been a while since the public heard from Melania Trump. After Trump’s loss in the 2021 election, he and his entire family retreated to his Mar-a-Lago resort in Florida, and it appeared there they would stay, licking their wounds in relative silence.

At the time, there were rumors that Melania was happy her husband was no longer president – certain reports insisted that she had grown tired and disillusioned with live in the White House, and that she instead wanted to focus on a new post-presidency life.

As per CNN, a source said back in 2020, while Trump was yet in the race to secure a second term, that Melania “just wants to go home.” As for her husband’s then-speculated plans to announce a run in 2024, the same source said “that might not go over well”.

No, @MELANIATRUMP, not “political bias”. They simply saw you as a poor excuse for a First Lady…. https://t.co/co9AZLGdFt

And yet time, they say, heals all wounds.

Trump has yet to officially declare that he will be running in the next presidential race, but he’s been characteristically critical of the way President Joe Biden is doing things and has made appearances at political rallies across several states of late.

It doesn’t take a genius to predict that Trump may well long for a return to the most powerful seat in the world. After all, he relishes, and indeed flourishes, when all eyes are on him.

If he does attempt to get himself reelected, Melania will of course once more be by his side. If he’s successful, she will become once more the First Lady of the United States.

While it’s highly unlikely we’ll ever get to know what Melania thinks about that possibility deep down – at least unless she releases some sort of tell-all autobiography at some point down the line – the former model herself has added a little fuel to the notion that the White House is once again in her husband’s plans.

Melania has been extremely quiet since leaving her role as First Lady, which in itself could be interpreted as proof that she felt a sense of relief at being able to return to some semblance of a normal life and leave the political arena for good.

Yet earlier this week she appeared before cameras with ‘Fox & Friends’ for her first interview since her husband ceased to be President.

The official reason for the interview was for Melania to reveal her initiative to celebrate foster care month. The scheme will reportedly help young adults in foster care to attend college, and Melania was on hand to surprise the scheme’s first recipient, Michael Whitesman, on a Facetime call.

On the call, Whitesman said to Melania: “Thank you so much for your generosity.”

The former FLOTUS then impressed upon the importance of application in studies. “Study hard and get good grades” she told Whitesman, who replied: “I will, I got you, straight A’s all the way.”

It was a heartwarming enough back-and-forth to appease fans who have missed Melania since she stepped out of the spotlight, I’m sure, but it was her question-and-answer with Fox & Friends co-host Pete Hegseth that will be making the majority of headlines.

Not only did Melania discuss things like NFTS and her exclusion from the cover of Vogue Magazine, but she also weighed in on the administration led by the man who beat out her husband in the 2021 presidential election.

“I think it’s sad to see what’s going on, if you really look deeply into it,” she told Hegseth.

“I think a lot of people are struggling and suffering and what is going on around the world as well. So it’s very sad to see and I hope it changes fast.”

First Lady Melania Trump deserves to be on the cover of Vogue! pic.twitter.com/I09ao4I1aw

And then came the moment some are taking as a hint that we might see the Trump family doing their utmost to return to Washington D.C.

When asked about Donald’s showing during his first four years in the White House, Melania dutifully responded: “I think we achieved a lot in four years of the Trump administration.”

As for the possibility of a reelection run, she said simply: “Never say never.”

Fittingly, Trump himself took to the stage at the Austin Convention Center in Texas on Saturday as part of his American Freedom Tour, and urged Republicans to get ready to “take back” the United States when the next election rolls around.

The former POTUS, joined on stage by former Secretary of State Mike Pompeo, as well as a number of other speakers, told the gathered crowd:

Naturally, the idea that Trump is seeking to assert himself in the Oval Office again will be sure to divide opinion. The New York-born business mogul was a whirlwind of controversy during his first tenure, and the fallout from his behavior after losing the 2021 election to Joe Biden is fresh in the minds of his many detractors.

As for Melania, returning to the role of First Lady – and the lengthy campaign it will take to get there – is something she’ll surely be spending a lot of time considering.

As mentioned above, the odds that we’ll ever get a definitive answer to the question of whether or not she even wants to be in the White House again are slim to none, but she may not have much of a choice if her husband – as predicted – turns his guns towards another lengthy election campaign.

What do you think about Donald and Melania’s possible return to the White House? Do you miss them at all?

Let us know your thoughts on the Trump family in the comments box on Facebook. Meanwhile, share this article so that more people can engage in the debate.