Elton John has had a rough year, after both enduring health issues regarding sickness and having been involved in an accident.

The iconic musician fell and injured his hip earlier this summer, which left him in what he described as “considerable pain.”

Fans have wondered about the ongoing status of Elton, and now new pictures of him have emerged. To that point, one detail has fans more than slightly worried as he was seen walking with the aid of a stick. Moreover, reports state that his friends are concerned about the future. 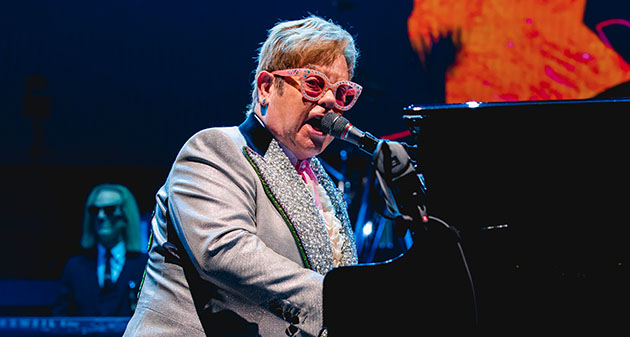 Even though he’s turned 74 years of age, Elton has no plans on slowing down, at least not for a year or two. The Pinner, England native, has been in the spotlight for decades, having released some of the most classic songs of the last century written with the help his long-time companion and colleague Bernie Taupin.

Enchanted by music, Elton taught himself to play the piano at age four. After his talent was recognized, he went on to earn a scholarship at the Royal Academy of Music in London.

At 17, he decided to drop out of school to focus on entirely on his burgeoning career. It was via his self-titled 1970s album that Elton got his big breakthrough with Your Song. In the years that followed, he released smash hits such as Crocodile Rock, Island Girl, Bennie and the Jets, and the celebrated albums Goodbye Yellow Brick Road in 1973 and Rock for the Westies in 1975.

Not only did Elton become famous for his extraordinary mix of rock and roll and pop music, but his live performances became more and more eccentric. Elton himself was celebrated for the way he dressed up in different costumes, perhaps best marked by his now-iconic huge glasses.

The costumes and theater-like performances became a massive part of who Elton John was on stage. In the end, it also helped him grow in a more significant way than one might have expected.

During the ’70s, ’80s, and ’90s, Elton continued his journey towards legendary status. Alongside Bernie Taupin, he released more smash hits, including songs such as I’m Still Standing, Nikita, Don’t Let The Sun Go Down On Me, Nikita, I Guess That’s Why They Call It The Blues, and Candle In The Wind.

When Princess Diana passed away, Bernie also rewrote the lyrics for Candle in the Wind for her funeral. Elton John performed the song inside the church.

Elton and Taupin then worked together on the 1994 film soundtrack The Lion King, for which Elton won an Academy Award with Can You Feel the Love Tonight. He won another Oscar in 2020 for Best Achievement in Music Written for Motion Pictures (Original Song), following the film Rocketman about his life.

To this day, Elton has continued creating music and bringing joy to people worldwide. His earlier hits have become legendary, but it would appear he is finally approaching the end of his touring days.

In January of 2018, Elton announced his final tour, Farewell Yellow Brick Road. The plan was to tour the world for three years before retiring from performing live for good.

In February of 2020, John performed in the city of Auckland, New Zealand. However, the show made worldwide news when Elton left the stage in the middle of a song.

In the middle of his set, Elton appeared to lose his voice. In a video from the show, he was visibly upset. He covered his face with his hands as he broke down in tears and leaned towards his piano – he was ultimately forced to cancel the show. 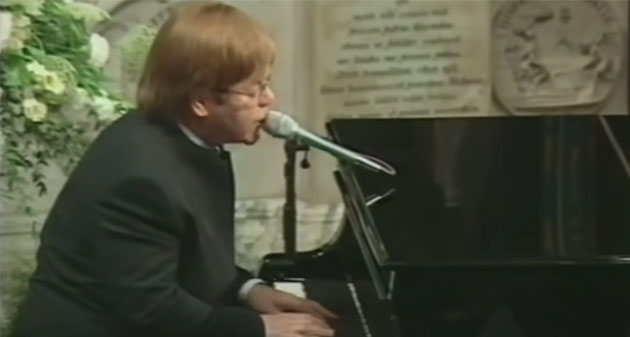 Elton was helped off stage to an ovation from the audience. Earlier during the show, the celebrated singer had revealed that he’d been diagnosed with walking pneumonia.

Walking pneumonia is a type of lung infection often caused by bacteria or viruses, according to BBC. It’s less severe than other types of pneumonia, and most people diagnosed with it don’t require medical attention. According to the BBC, symptoms can be compared to those of a bad cold, including a sore throat, headache, and chest pain.

Then, due to the outbreak of COVID-19, he had to put large parts of his farewell tour on hold, though that tour is set to recommence in 2022. It should go without saying that John spent plenty of time at home during the pandemic.

At 74, he’s reportedly used his time wisely, working out and staying healthy.

“I just wanted to come out the other side not overweight and feeling that when I go back on tour, I’m going to be the fittest I’ve ever been.”

Since the start of the year, Elton’s walked an impressive 42 miles in his swimming pool. A lot of the necessary motivation has come from his family pushing him to stay healthy.

“It’s all comedown, again, to what do you want for the rest of your life? I have two kids I want to see and be around as much as possible,” John said of his sons Elijah and Zachary. 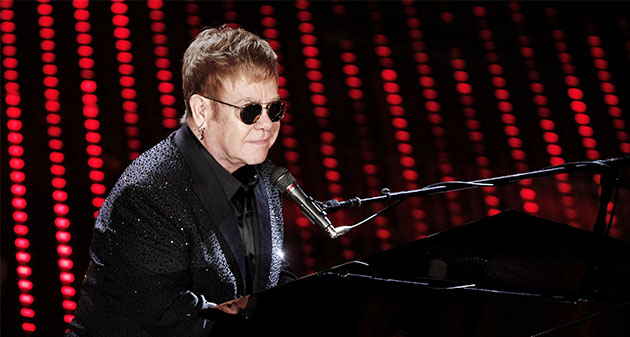 “So in that case, Elton, get yourself together, do what you’re told, and you’ll see the benefits of it. And that’s what I’m trying to do.”

This year, Elton was set to hit the road to resume his Farewell Yellow Brick Road tour. However, once again, his health has stopped him from doing what he loves.

“I have been in considerable pain”

Through his social media channels, Elton announced that he’d been forced to push back the European tour dates of his tour to 2023. He recently suffered a hip injury, one that requires an operation.

“It is with great sadness and a heavy heart that I am forced to reschedule the 2021 dates of my Farewell Yellow Brick Road tour in Europe and the U.K. to 2023,” Elton John wrote.

“At the end of my summer break, I fell awkwardly on a hard surface and have been in considerable pain and discomfort in my hip ever since. Despite intensive physio and specialist treatment, the pain has continued to worsen and leads to increasing difficulties moving. I have been advised to have an operation as soon as possible to get me back to full fitness and make sure there are no long-term complications. I will be undertaking a program of intensive physiotherapy that will ensure a full recovery and a return to full mobility without pain.”

Elton clarified that he would still perform some songs at the Global Citizen Festival on September 25. He added that he doesn’t “want to let a charity down.” However, the performance was much shorter than the lengthy tour concerts.

“I know how patient my incredible fans have been since Covid halted touring last year, and it breaks my heart to keep you waiting any longer. I completely feel your frustrations after the year we’ve had,” John added in the announcement.” 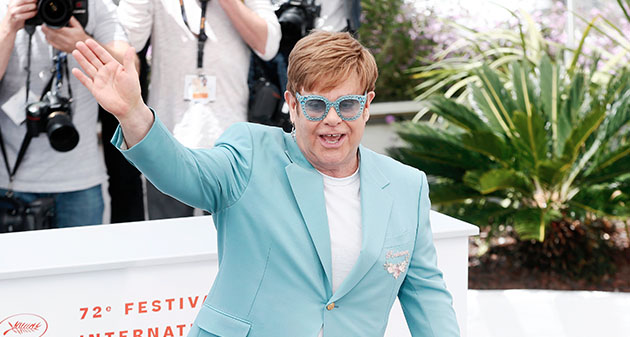 He added, “I promise you this — the shows will return to the road next year, and I will make sure they are more than worth the wait.”

Speaking on ITV shortly after giving the sad news of the tour’s postponement, Elton stated that he wouldn’t be able to do the gigs the way he wanted to because of the damage to his hip.

“I can’t move sideways, I can’t get in and out of a car. And the decision had to be made because I wouldn’t wanna go on stage and give less than 100 percent.”

“And I don’t know – with a year and a half of touring to go – how long my hip would last. It probably wouldn’t. So better to get it done now,” he added. “Unfortunately, disappoint all the people this year, but I’ll make it up to them, and I’ll be in much better form.”

Since his last show, things have been relatively quiet surrounding the musician, and he hasn’t been seen in public. Fans worldwide are waiting for the day he can get back to touring. The radio silence was broken recently when they were given a glimpse of him up and about again.

That’s not to say, however, that the update was all positive.

On Wednesday, Elton was spotted at Windsor, where he was bestowed a rare royal honor and admitted to the Order of the Companions of Honour. He collected the award from Prince William in recognition of his tremendous music career and charity work surrounding AIDS. 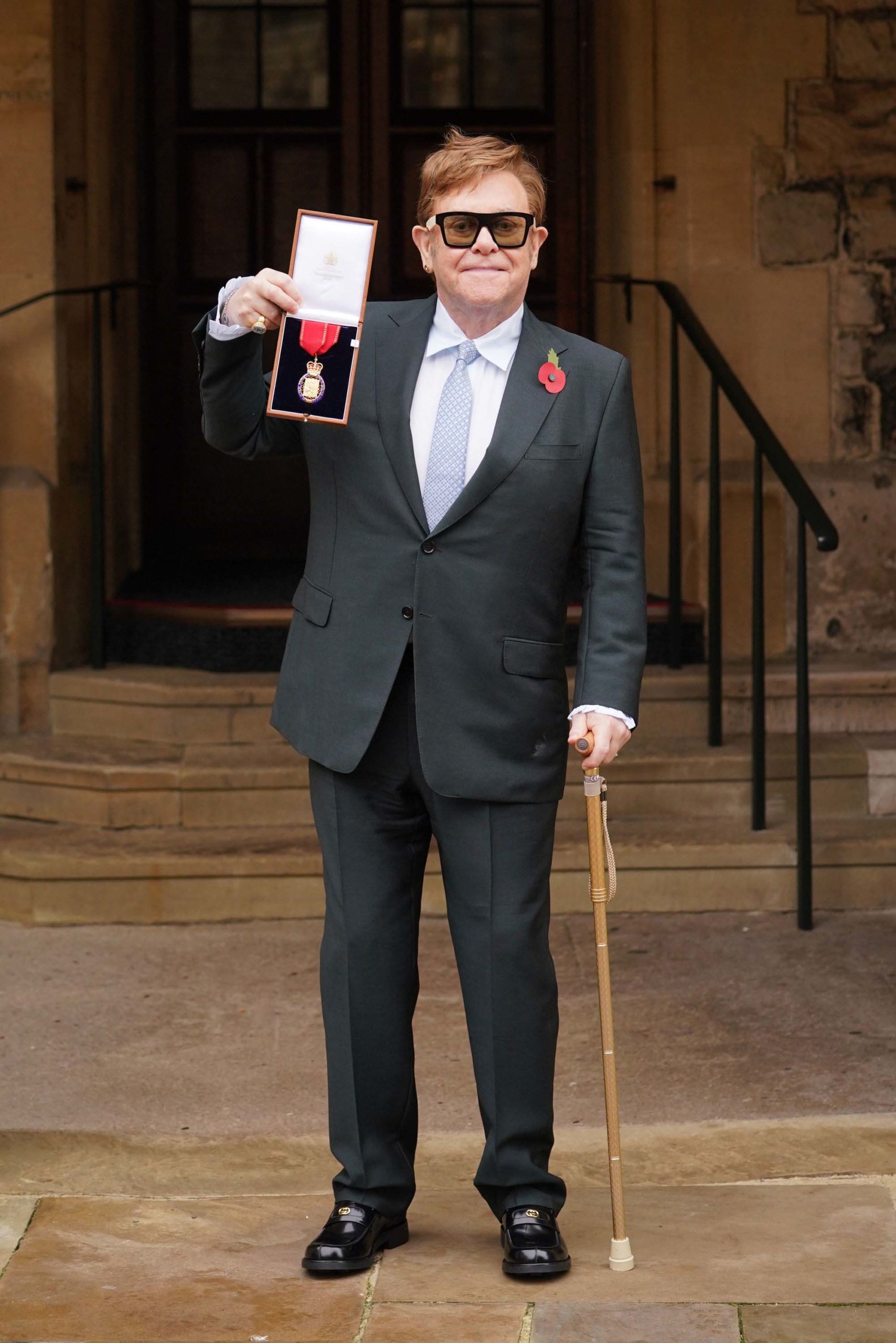 Fans were quick to spot that John wasn’t seen or the first time using a walking stick. It comes just a month after Queen Elizabeth was pictured using a stick herself for the first time in public.

Awarded Order of the Companions of Honour

The Order of the Companions of Honour was established by George V in 1917, Sky reports. However, only 65 people can hold it at one time, and so John joined the likes of Paul McCartney, David Attenborough, and Judi Dench. Queen Elizabeth heads up the order.

After the ceremony, Elton told the press that he was “raring to go” despite not looking “100% fit”.

One of his closest friends, Freddie Mercury, passed away from Aids in 1991.

“We have the medicines, we have the wherewithal – we just need to get people to get tested,” he said. “We need to stop the stigma. So when I stop touring in 2023, I will hopefully be able to devote more time to this than I can at the moment.

“We’re doing great work. We’ve raised $535m (£396m), that’s over half a billion dollars since 1991,” he added. “I think that’s pretty good for a small organization, but we’re not resting on our laurels; this is something that I desperately want to finish off.” 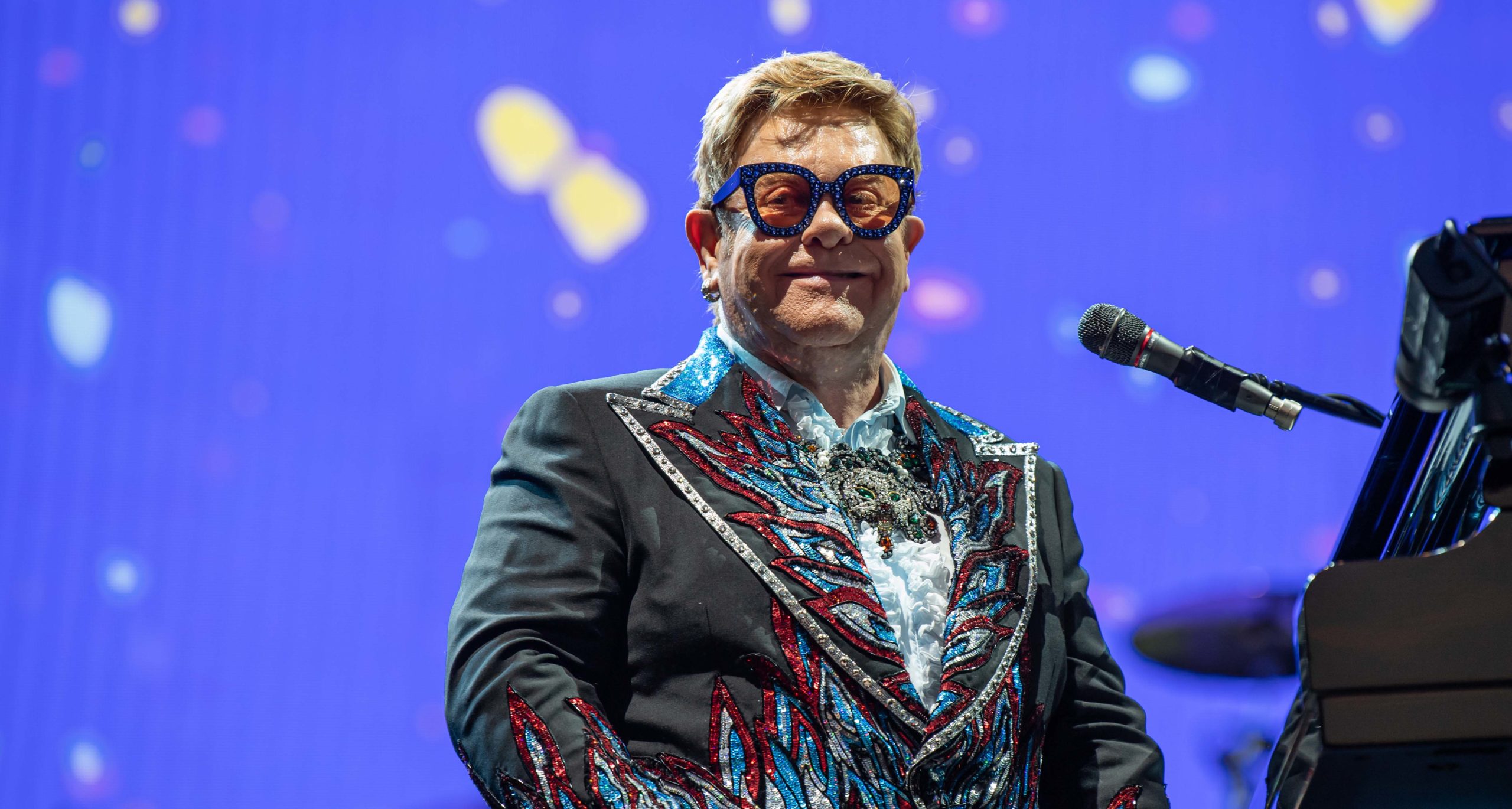 Now, Elton could easily stop touring and enjoy the fantastic retirement he deserves. Just one look at his net worth – estimated at a staggering $500 million – indicates that he’s able to enjoy quality time with his family without the need to head out on the road and earn more money.

Friend of Elton John’s: “I worry that he won’t finish”

With that it mind, it seems like friends of John’s aren’t happy about his insistence of embarking on his final world tour.

Music colleagues of his – who’ve decided to remain anonymous – told the New York Post that they believe his decision might be the wrong one.

“He is not Superman. I wonder how he’s even getting insurance to do these gigs — can you imagine the premiums?” one musician who has known John for decades told The New York Post.

“He should be at home with his kids and his husband, not stuck on the road. I worry that he won’t finish this tour.”

“Why, why, why does Elton feel that he has to do this at this age?” the musician added. “There is only one reason: cash.”

As stated, John doesn’t need the money. Indeed, according to the man himself, however, it’s not all about that.

“I want to finish it in the right way and go out on a high note, but I also want to finish because I don’t want to do it again,” Elton told The Guardian.

“I’ve been doing this since I was 17 – I’ve had enough applause. I’ll be 76 when the tour finishes – who knows how much [time] I’ve got left? It will be spent with the kids, and with David, smelling the roses.”

Elton John is a true legend and we wish him all the best in his recovery.