Demi Moore has been in the Hollywood spotlight for over four decades. After landing her first role in 1981, she has managed to create a successful career, as well as a loving family.

Over the last number of years, fans have speculated about Moore’s looks. Some people have even accused her of going through with plastic surgery.

Demi Moore is back for real. Earlier this year, she surprised the world by walking the runway for the first time, and fans couldn’t get enough of her new looks! 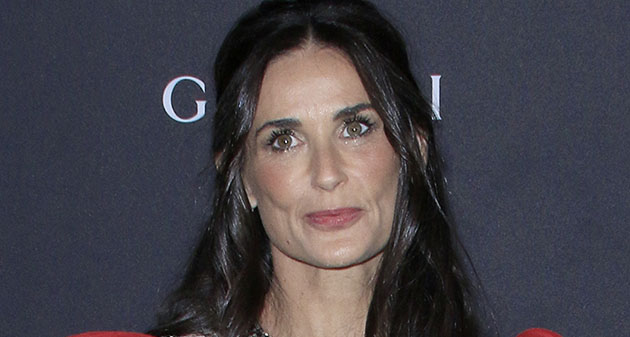 Demi Moore, 58, always knew that she was destined for more than a ‘normal’ life. She decided early on that school wasn’t for her, and had made her film debut before her 20th birthday.

Since then, Moore has established herself as one of the great actresses of Hollywood. Three marriages – and three beautiful children – later, she’s now exploring new avenues.

At the same time as Demi Moore remains a huge star, she also finds herself in quite a controversial period regarding her looks. Fans have accused her of having with plastic surgery, though she’s continued to deny that.

Even so, new pictures suggest that she’s gone through quite the transformation – and she looks amazing!

So how did Demi Moore turn into a major Hollywood star? This is all you need to know! 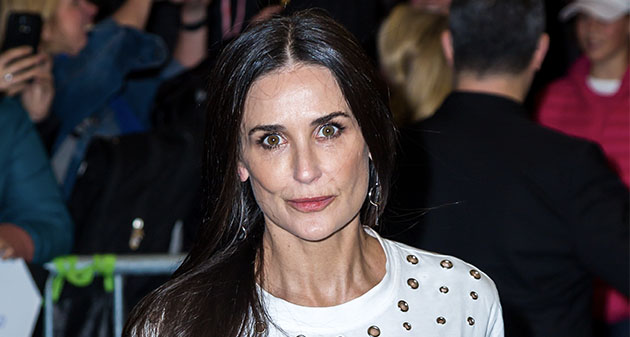 Demi Moore’s childhood was kind of messy, at least regarding where she lived.

Born on November 11, 1962 in Roswell, New Mexico, Moore’s parents split up before she was actually born. She was raised by her mother and stepfather, and by the time she had turned 14, Moore had already moved about 30 times.

Eventually, the family ended up in Los Angeles. Though constantly moving might be a tough thing for a kid, what with them not being able to create strong friendships, Demi Moore sees it as something positive.

She says she learned to “assimilate into whatever new surroundings” she had, as well as becoming very comfortable with people at a fast pace.

“I think that was one of the strongest contributing factors to my becoming an actor, because I constantly had to readjust, even reinvent,” Moore told Interview magazine.

“But at the same time, it also became very easy for me not to become attached to people, places, or things.

“I learned to enjoy people and places for the time I had, for the moment, to be in the moment, and move on.”

Demi attended Fairfax High School, but during her junior year, she decided to drop out and move away from her parents. She went on to work as a debt collector for a short while, and at the same time pursued a career as an actor. 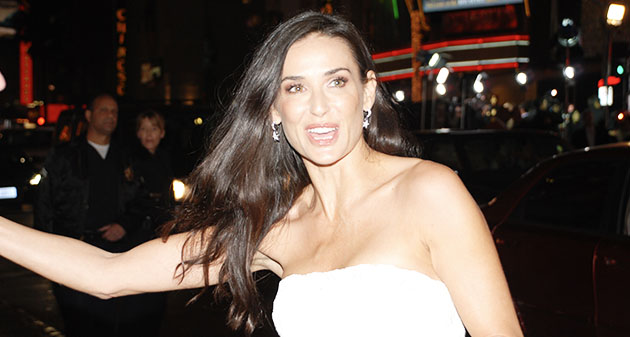 Moore did some modeling, but just as in school, she didn’t want to really her craft.

“I was too afraid. I thought that if an acting teacher had said to me, ‘You know what, you’re not good,’ I would not have gone any further,” she explained.

“It was easier for me to justify going to an audition and getting rejected, maybe because they wanted somebody blonde, maybe because I wasn’t experienced enough. I could live with that more easily.”

At the same time as Moore was afraid of taking classes, she also felt that she sometimes didn’t know how to act when it came to being emotional.

It wasn’t until she got the part in the 1990 film Ghost that she really felt that she started accessing her own emotions and acting for real.

“In fact, I don’t know anybody who is raising their hand saying, ‘Oh God, I love being vulnerable and needy’,” she said.

In 1981, Demi got her first role in the television series General Hospital, where she remained for two years. At the same time, she found other projects, and the same year she also made her film debut in Choices.

She landed a few more roles, and also married her first husband, musician Freddie Moore. Even though it seemed like things were moving forward, Demi never quite got her big breakthrough.

However, in 1985, she landed her biggest role yet as she starred in St. Elmo’s Firealongside stars such as Rob Lowe and Emilio Estevez.

The year before, Demi had divorced her husband, but she soon gave love another shot.

Demi Moore met Bruce Willis in 1987, at the premiere party for the film Stakeout. They both had other dates with them that night – Moore’s then-fiancé Emilio Estevez was the star of the film.

At first, Moore and Willis became friends. But in the end, love took over. It all became clear that first night they met, as Willis made a move.

“I’d never encountered treatment like this before,” Moore wrote in her memoir, Inside Out.

“Bruce was so gallant- in his own boisterous way, a real gentleman. When I said it was time for me to go home, he offered to walk me to my car. He was so eager about it- Like a little boy who didn’t want to miss the ice-cream truck. When he asked for my number, I felt a wave of schoolgirl flutters.”

By this point, Demi Moore had grown into a star. In 1990, she starred in Ghost, which was her big breakthrough role. The film earned five Academy Award nominations, and Moore went on to star alongside Tom Cruise in the 1992 hit film A Few Good Men.

Meanwhile, she and Bruce Willis became one of Hollywood’s most powerful couples. In 1996, Demi Moore made history by becoming the highest paid actress at the time. She earned a little more than $12 million after starring in Striptease.

Sadly, it didn’t do much for Moore’s career, as the film was a huge flop. 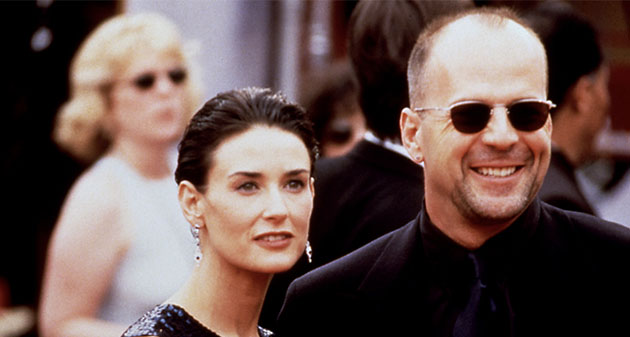 Yet at the same time as she was trying to get another big project, her personal life – as for many Hollywood stars – became the focus of the public eye.

In 2000, she and Bruce Willis divorced, and she began dating actor Ashton Kutcher. Some thought their relationship was merely a publicity stunt, however, the two tied the knot in 2005.

“I actually think I was at a point where I thought I was never going to find anybody,” she told The Guardian.

“I don’t come with baggage, I come with trunks – and as the mother of three teenagers I wasn’t feeling sorry for myself, but dating seems kind of silly.”

Moore and Kutcher divorced in 2013.

Moore’s romantic relationships became very public. For her, it became a process of “learning to love yourself” and accepting yourself for you are, as she revealed on “The Jess Cagle Show” on SiriusXM.

“For me, I had changed myself so many times over and over to fit what I thought somebody else wanted,” she said.

“It’s that idea that we’re kinda conditioned to work toward being desired, but we’re not supposed to have desires of our own.

“It really is commendable in our disposal times to go through the journey of really honoring the love that brought you together in the first place and to really give it everything you’ve got. But you can’t do that without that love and acceptance of yourself.”

Over the last few years, Demi Moore has been the subject of harsh treatment. Certain fanss have accused her of having undergone plastic surgery, while The Guardian report that some even claim Moore paid $3 million for her new body.

Even though rumors have spread all across the entertainment world, she is steadfast on her stance that she hasn’t had plastic surgery.

“It’s irritating. And it isn’t true. To fight it feels futile because I feel it perpetuates the myth,” Demi Moore told The Guardian. “But really, the culmination for me was when there were multiple reports I had my knees done. When I read that, I thought: wow, should I have been worried about my knees?’

“They say I’ve had multiple face surgeries. I was in getting a facial recently and there were reports that I’d been in there for countless hours, saying I’d had surgical procedures. Am I going to sue? Do I really care?’”

In a 2010 interview with Elle however, Moore admitted that she’d some work done. She compared the speculation to “school-yard name-calling.” 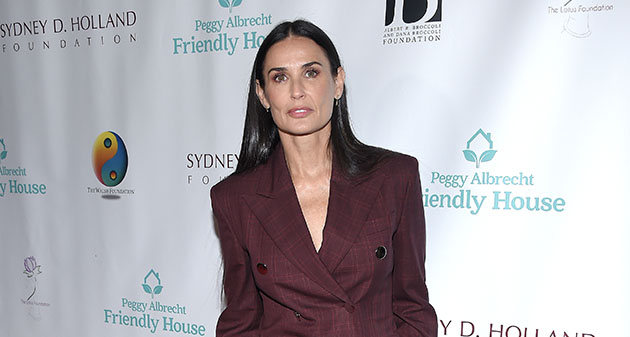 “I have had something done but it’s not on my face,” Moore said.

“You know what? Maybe one day I’ll go under the knife. It just irritates me that people are constantly saying how much I’ve spent on plastic surgery.”

Being one of the biggest stars in Hollywood, Demi Moore will always be in the spotlight. In 2019, she released her memoir Inside Out, where she wrote about her childhood, as well as celebrity life.

Of late, Moore has actually tried a whole new career. Naturally, it once again sparked rumors about her transformation – and raised the question as to whether she’s had any plastic surgeries done recently.

At the 2021 Paris Fashion Week, Demi Moore made a rather surprising appearance, walking down the runway of Fendi’s show. Afterwards, she said it was a dream come true.

“It really was a teenage fantasy fulfilled,” she said on Naomi Campbell’s Youtube show No Filter with Naomi.

“I took a moment and I thought, ‘Oh my God, I just walked a runway show with some of the biggest models ever’. I literally felt like a little kid.”

“It was very powerful,” she added.

“It felt special for me because it felt less that it was entirely about the clothes and more that it was about the full story. It felt very magical and moving. It was extremely memorable.” 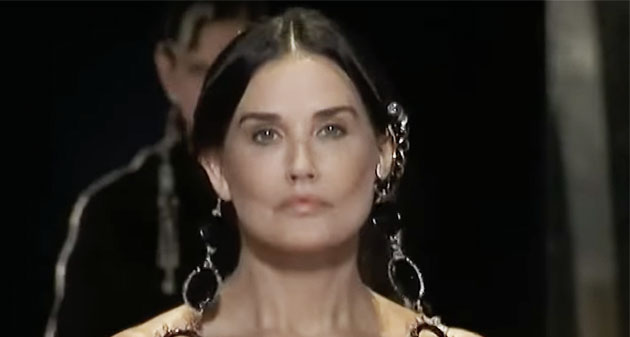 Social media exploded with rumours that Demi Moore had gone under the knife following her runway appearance. Especially since many thought she looked different compared with just weeks earlier.

Owing to the massive amount of makeup she was wearing, her cheekbones became much much more noticeable than usual.

“Have you seen Demi Moore has had more plastic surgery?” one fan wrote via Twitter, as reported by In Touch Weekly.

“It doesn’t look natural at all,” another person wrote.

“Demi Moore plastic surgery! That’s a shame! I wish women would allow themselves to age gracefully. It’s so much more attractive than when they start messing with their face.” A third one wrote, adding, “Why, Demi, why?”

We think Demi Moore looks stunning. No matter what people say, we think she is a true beauty!

Demi Moore has surely been through some ups and downs in her life. We are so happy that she finally got to experience a dream of hers of walking on a runway.

Please, share this story if you also think Demi Moore looks amazing at 58!