Back in the ‘90s, the stunning actress Yasmine Bleeth had the world at her feet. She was young, beautiful, talented, and one of the biggest stars on TV – portraying Caroline Holden on Baywatch.

But how many people have heard of Yasmine after her breakthrough on Baywatch? Not so many, I would assume. And there are several reasons for this – some of which are both tragic and heartbreaking to learn… 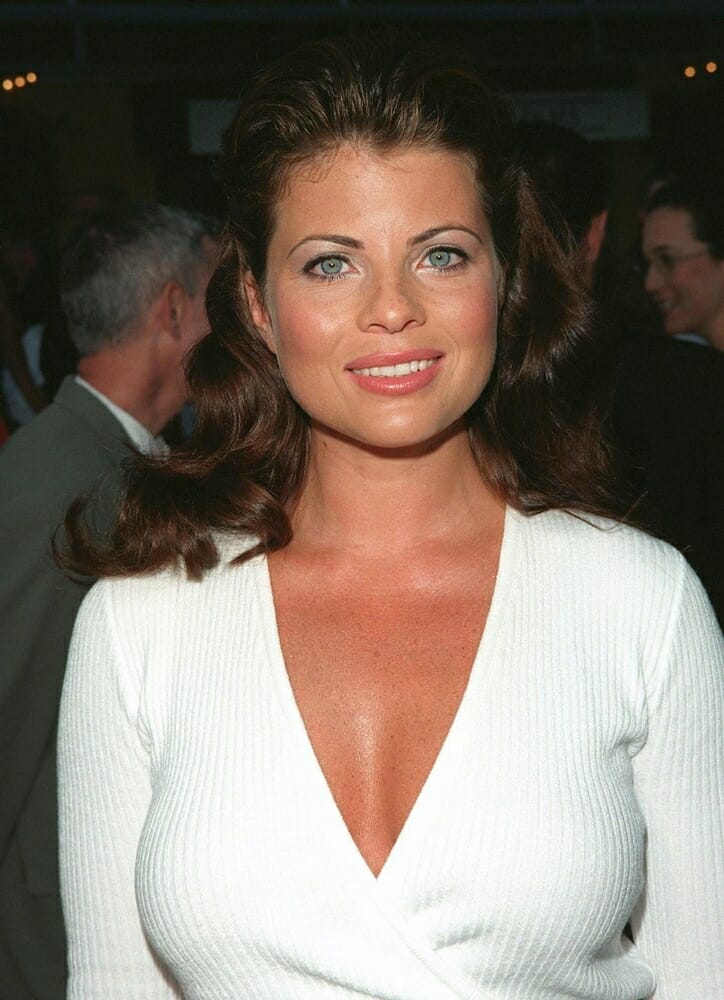 The former Baywatch bombshell Yasmine Bleeth has lived a very dramatic life, and it all started in New York City, where she was born in 1968.

As a 10-month-old, Yasmine landed her first acting job. Back in 1969, she appeared in a commercial for Johnson & Johnson’s No More Tears baby shampoo, so it was no doubt which career she would pursue.

Her father, Philip, was a business proprietor and hung out with Arlo Guthrie and Alice Brock. Yasmine’s mother, Carina, was a Pied-Noir from Algeria, and judging from old photos, it is clear from whom Yasmine got her looks.

Thanks to her model mother, Yasmine was discovered by the famous fashion photographer Francesco Scavullo. Scavullo, who discovered Brooke Shields when she was seven months old, found Yasmine Bleeth while working with Carina. 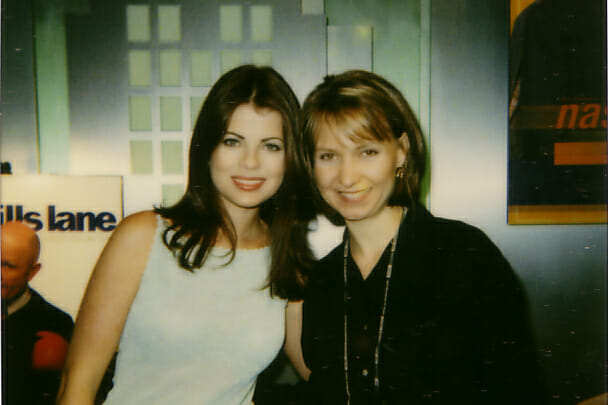 The fashion photographer rented mobile homes from Carina’s company for his photoshoots and first laid eyes on Yasmine when she was six.

In his photobook “Scavullo Women,” the legendary photographer decided to include Yasmine and her mother.

“He thought my mother was one of the most beautiful women in the world,” Yasmine told Hartford Courant in 2004.

Even though Yasmine became an actress at a young age and was used to being in the public eye, it didn’t mean that she was popular among the boys of her age. Instead, she had to take the matter into her own hands.

“When I was a little girl I used to have to force boys to kiss me. My toughest friend had to hold them down,” she told Total Film magazine in 1998. 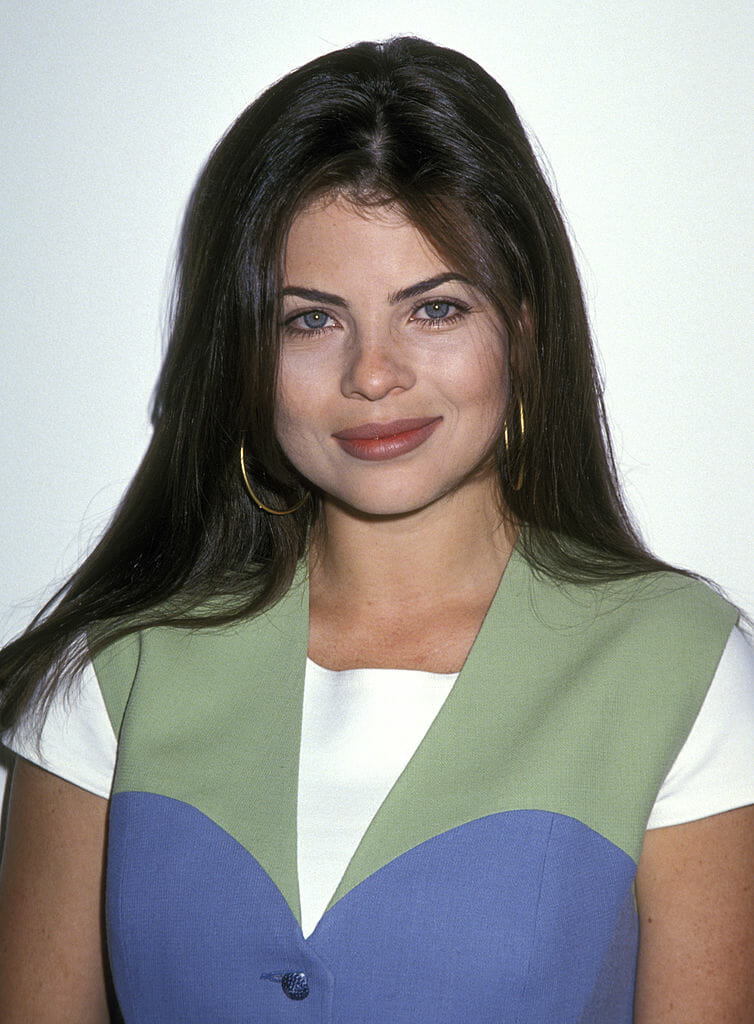 Yasmine grew up on the Upper West Side of Manhattan. Her parents broke up when she was very young, and as a young girl, she was mainly brought up by her mom. But Yasmine was also very close to her father, a life-long New Yorker who was 22 when he had Yasmine.

“I was lucky, even though my parents split up when I was young, they became friends later on and that made it easy for me. He (her dad) only moved three blocks away after the divorce,” Yasmine told Daily News.

After starring in her first movie at age 12, the young actress went on to appear in the daytime soap opera Ryan’s Hope between 1985-1989. 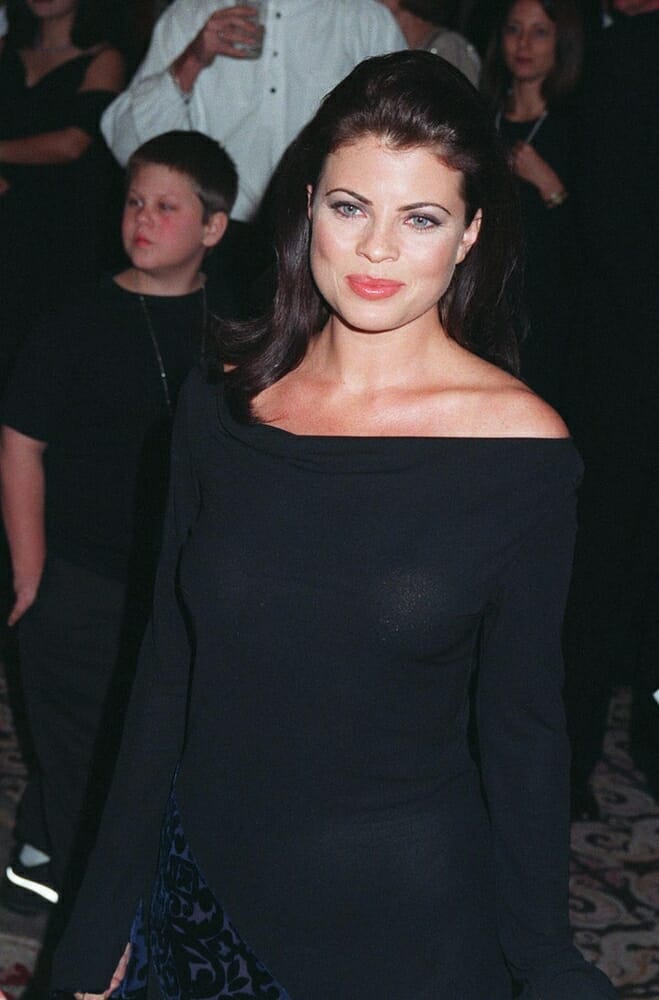 Yasmine moved out when she was 17 but suffered a terrible blow a couple of years later when her mom got diagnosed with inflammatory breast cancer.

Tragically, her mother Carina passed away at age 47, and Yasmine was devasted. Dealing with her grief, she turned down every job offer for almost a year.

Even these days, Yasmine Bleeth is mostly known for her role as Caroline Holden on Baywatch. As one of the iconic bikini-clad ladies running along Santa Monica beach in California, she instantly got a major breakthrough.

The iconic series was extremely popular during the 90s, and Yasmine made her debut in season four. It started as a guest appearance, but the bodacious brunette got a permanent spot for the following three seasons. 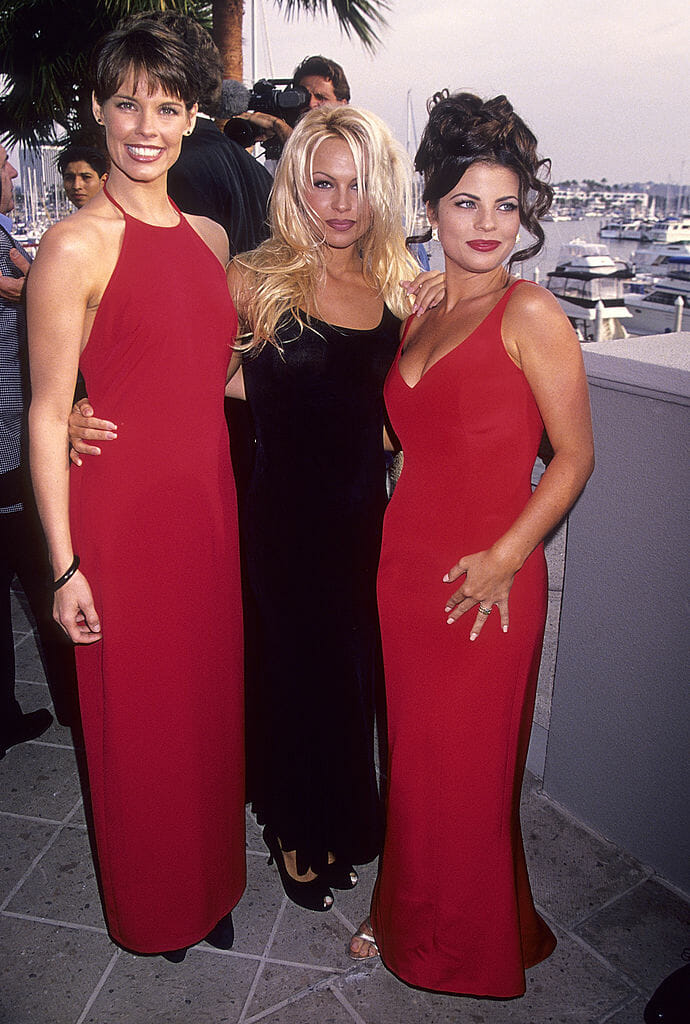 You might believe that Yasmine auditioned for the role among thousands of others, but that wasn’t the case. Instead, the producers called her up and asked her to be on the show.

But it was not evident that Yasmine would say yes. She was just at the start of her career as an actress and model. Yasmine was worried about how a potential role in Baywatch would affect her reputation and future.

Once again, she turned to her dad for advice.

“They called me up, he was with me the whole process and gave me a lot of advice. He grew up surrounded by models, who wore less than I do on the show,” she said.

Yasmine, who became a series regular and fan favorite, appeared in 72 episodes of Baywatch. The show kickstarted her rise to stardom and brought her attention from around the world. According to the Guinness Book of World Records, Baywatch was the most-watched TV show on the planet for a while.

People Magazine listed her as one of the “50 Most Beautiful People in 1995,” and Yasmine got a lot of modeling jobs, she even got her own swimwear line.

When Yasmine left the series, a lot of directors and producers reached out to her. Yasmine starred as the sexy inspector Caitlin Cross on the TV series Nash Bridges, which aired on CBS between 1998-2000.

By the time she was cast in a starring role on the series Titans, in 2000, it had become clear that Yasmine Bleeth was struggling on a personal level.

Outwardly, it looked like Yasmine was feeling well and living a dream life as an actress, but the truth was that she was fighting an addiction that kept her captive in her own body. 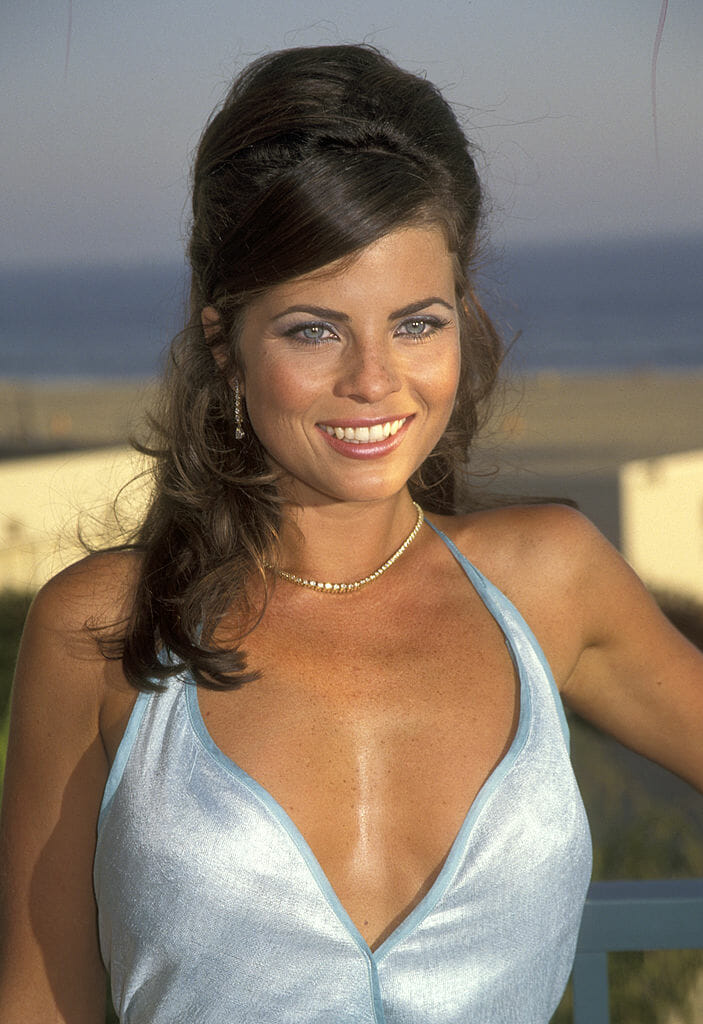 Her addiction went hand in hand with her professional downfall. Her behavior got her blacklisted by many colleagues in the industry.

In 2003, she made a brief appearance in the TV movie Baywatch: Hawaiian Wedding, but that became Yasmine’s last onscreen appearance. Since then, she has not been in a single film or series. It became very quiet around Yasmine Bleeth.

So what really happened to her?

According to her, everything started when she met Richard Grieco.

Actor Richard Grieco and Yasmine Bleeth met back in 1996 and started dating. The couple was engaged for 2 years and starred together in the movie Ultimate Deception in 1999.

According to some sources, Yasmine also dated Friends actor Matthew Perry for a couple of weeks in the 90s. Grieco wasn’t happy when he heard about the romance and sent Yasmine 100 red roses and a diamond ring to show his love for her, Philadelphia Daily News reported in 1996. 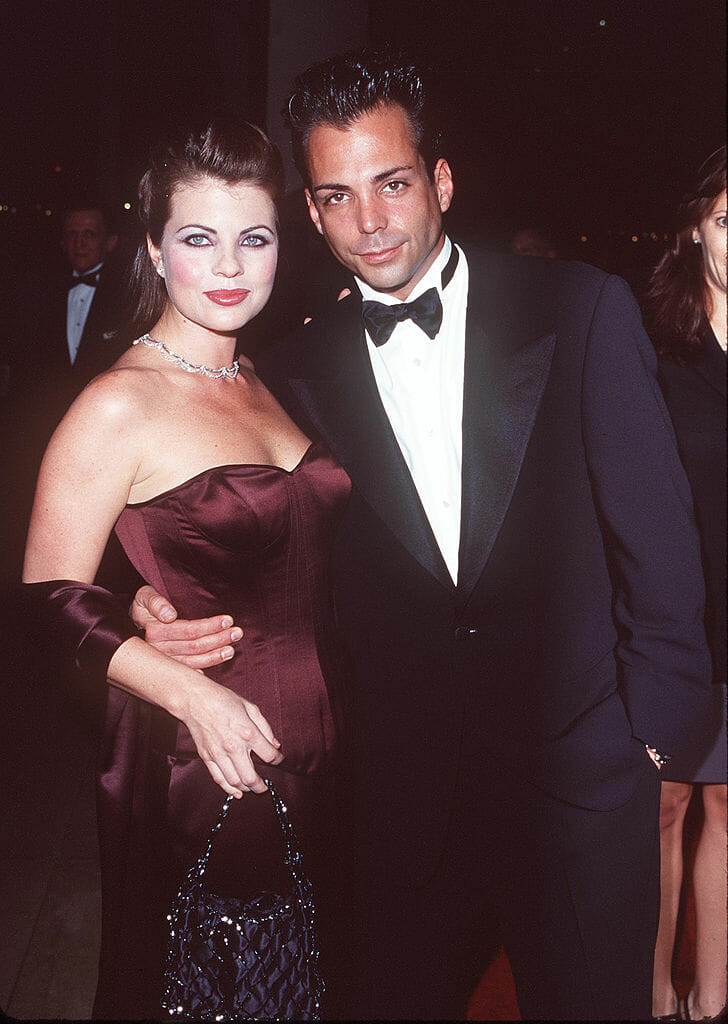 The relationship with Grieco crashed in 2000 and according to Yasmine, she was in a very bad place – both mentally and emotionally. That’s why she turned to substances, it was a way to make her “feel good again.”

After a while, that was all she thought about: getting home and doing lines. While starring in Nash Bridges, she developed another desire.

“I’d spend hours plucking my eyebrows, putting on tanning cream, doing a facial. But mostly, I’d shop on the internet. I’d order from Saks Fifth Avenue or Neiman Marcus or Bluefly. It was the biggest joke–I bought all these beautiful things, but I never went out. Forget the money I was spending on drugs–I’d spend literally $5,000 to $10,000 in one night shopping on the Web! I was obsessed. Shopping was instant gratification,” she told Glamour magazine in 2003.

During these years, Yasmine stopped seeing friends and stopped answering her phone. While on set, she was sober. But her colleagues couldn’t help to notice that something was wrong.

“I got a bloody nose on the set a couple of times, but the makeup artist would just hand me a tissue without saying a word and I’d clean it up. If I sounded stuffed up in the morning, I’d give myself a facial or I’d go to the steam room to detoxify my body. And if I was sniffling, my publicist would tell people I had sinus problems, which I do,” she said. 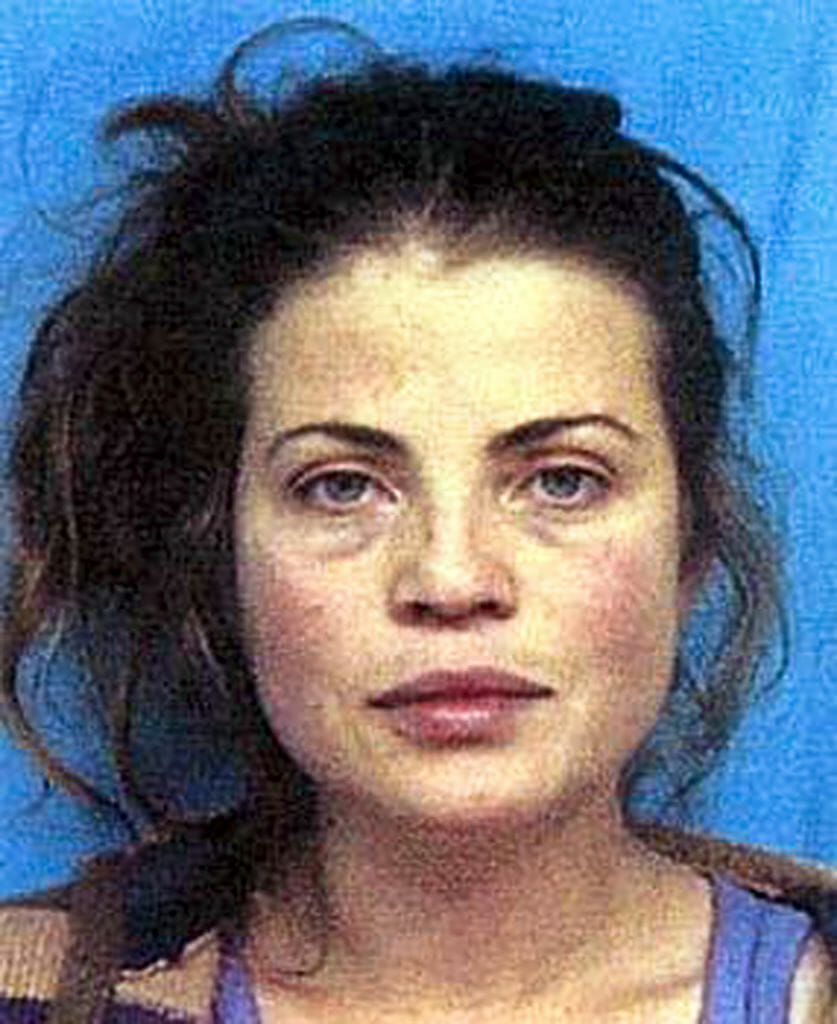 The substances took a heavy toll on the actress’ body. and Yasmine “looked like an alien.”

The once curvy model was size 6 during her golden years but was now down to size 0. She was skinny and her nose was big and swollen across her face. People could hardly recognize her and her dad tried to intervene several times.

Towards the end of 1999, disaster was imminent. Doctors warned her that her body was on the verge of rupture. An infection in her nose could have killed her.

“The doctor put me on antibiotics and said, ‘Another couple of months with this infection and it could have gone to your brain and killed you,’” she said.

When she collapsed during a photoshoot in 2000, the former Baywatch actress realized she needed help. She checked in at rehab but had a relapse. It would take a few years before she finally got over her demons. 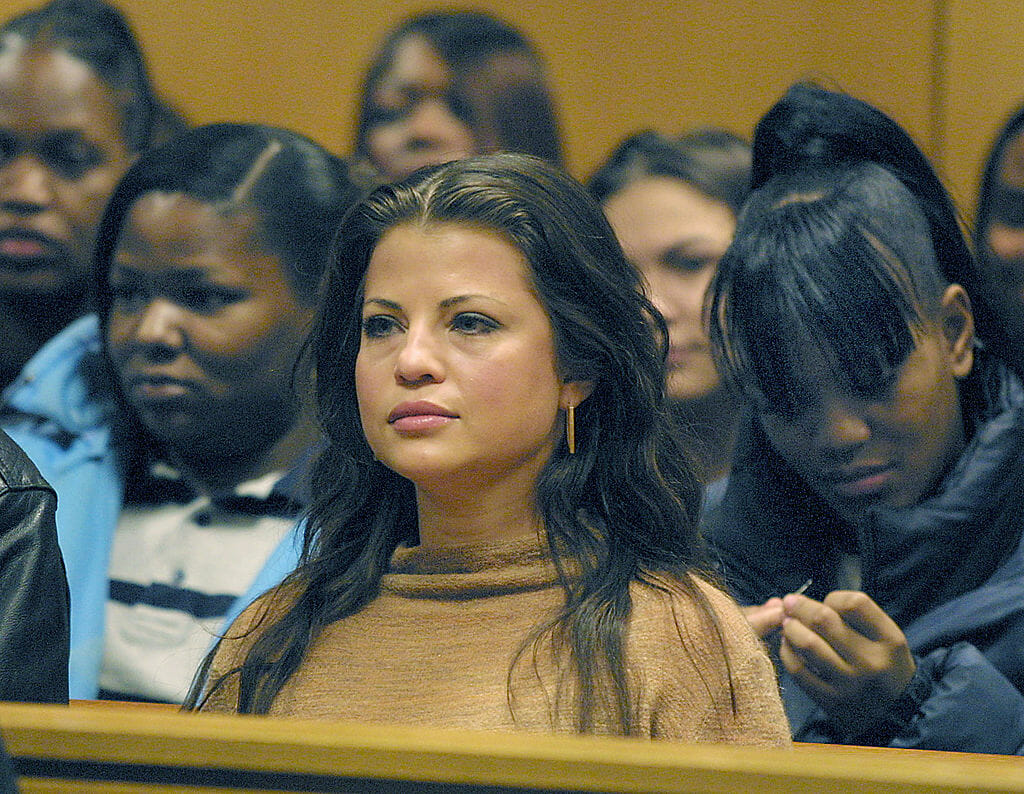 After a car accident and encounter with the police, Yasmine realized she had to do something drastic and change her lifestyle.

She struggled to live a clean life and turn things around, but she managed to do it. The Baywatch star even met the love of her life when she was getting clean. When she entered the Malibu-based Promises Rehabilitation Clinic, Yasmine met her future husband Paul Cerrito.

The couple tied the knot in Santa Barbara, California, on August 25, 2002.

“They say you shouldn’t get into any relationship in the first year of sobriety — especially with someone in the program, but Paul and I fell in love immediately,” Yasmine told Glamour Magazine. 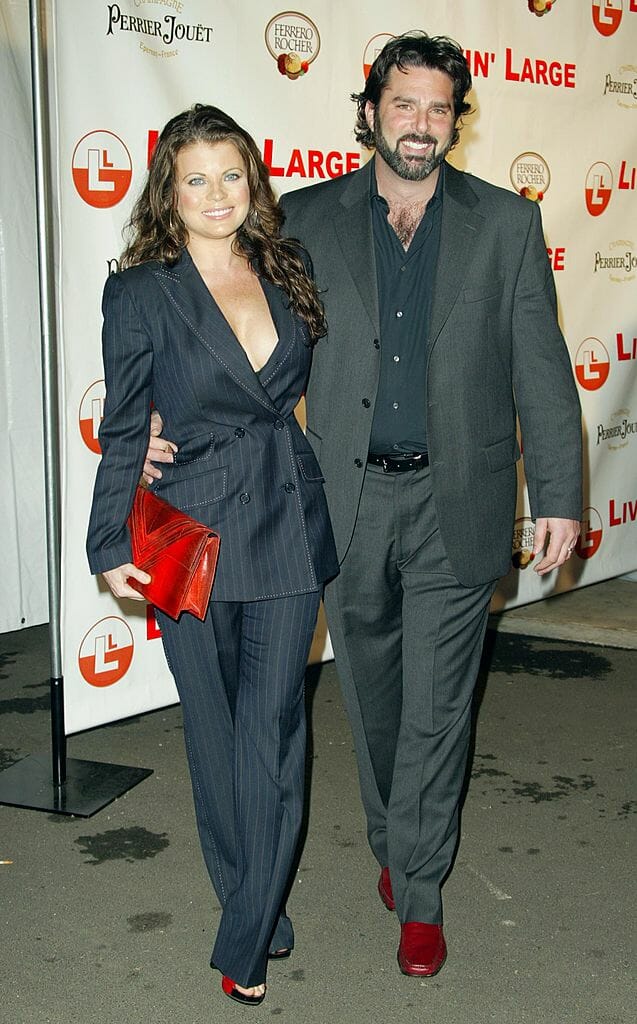 Today, Yasmine Bleeth lives a quiet life together with her husband and splits her time between her homes in Southern California and Scottsdale, Arizona.

The 53-year-old former glamour model and actress still stays away from the limelight, but in 2020 she was spotted walking her dogs in California. The ex-actress, who has focused on staying sober, looked very different. No one would probably guess that it was “Caroline Holden” from Baywatch walking on the streets with her pooch.

However, Yasmine looked happy and relaxed, which of course, is the most important thing. According to The Mirror, she wore “a pair of strappy Birkenstock sandals and flashed a coat of red nail polish on her toes” and smiled at the cameras.

Yasmine’s primary source of income has always come from her acting career. She hasn’t worked since 2003 but she earned her fair share of dollars when she was a star in the 90s. According to Celebrity Net Worth, Yasmine Bleeth has a net worth of $2 million.

Some actors will forever be associated with a particular role, and that’s definitely the case with Yasmine Bleeth. 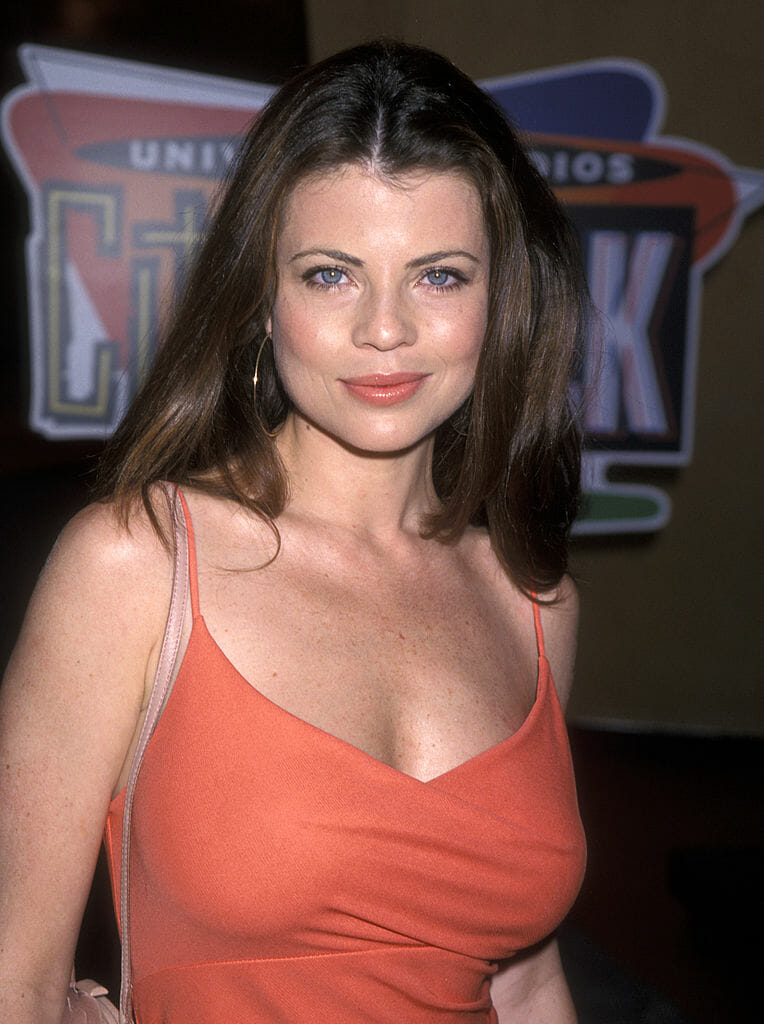 I actually had no idea that Yasmine Bleeth completely gave up acting as early as 2003. She is certainly not the first actress to have paid a high price for being a celebrity, but it feels good that she has gone through the most challenging period in her life and came out fine on the other side.

Hopefully, she’s doing great today and can focus on the most important things: Her family, her dog, and herself!

Some actors will forever be associated with a particular role, and that’s definitely the case with Yasmine Bleeth. I will never forget her portraying Caroline Holden in one of the most iconic television series ever created.

Thanks for all the memories, Yasmine!

Thomas Gibson’s divorce from wife of 25 years was kept private, because it was ‘hard enough’ on his kids
Valerie Bertinelli says Betty White was “exactly the way people imagine” and inspired her every day