Little Brenna’s incredible life story serves as an inspiring example of how parents can overcome any difficulties by loving their children more than they love themselves.

Some parents will abandon their children just because they are different-looking.

This inspiring story will show parents who may be having problems with their children that everything is possible as long as the whole family works together.

Evan and Courtney Westlake were happy with their lives and with their son Connor when they learned they were expecting another child.

When the couple realised that the family was expanding even further, they were overjoyed. 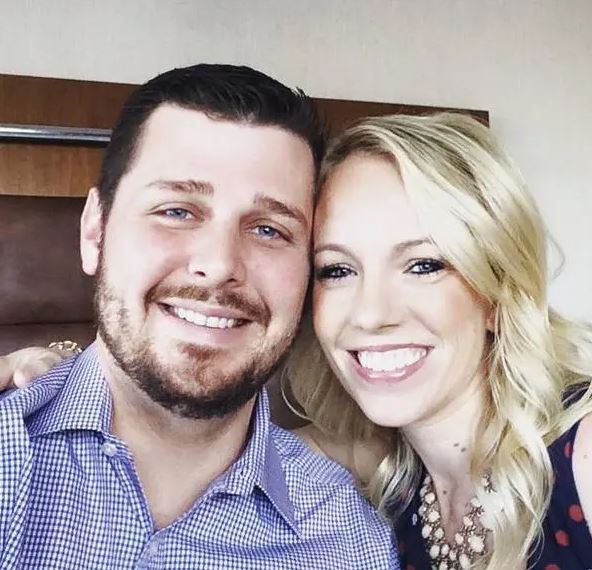 Like every other expecting couple, they attended the initial scan together, and the doctors gave them the all-clear.

They learned that little Connor will soon have a sister only a few months into the pregnancy.

They were getting ready for all the things the family will need for an additional member.

Dad Evan joked, “I’ll have to learn how to braid hair now.”

Just a few weeks before New Year’s Eve, Courtney went into labor, but when the baby girl was delivered, the plans for her arrival were changed completely. 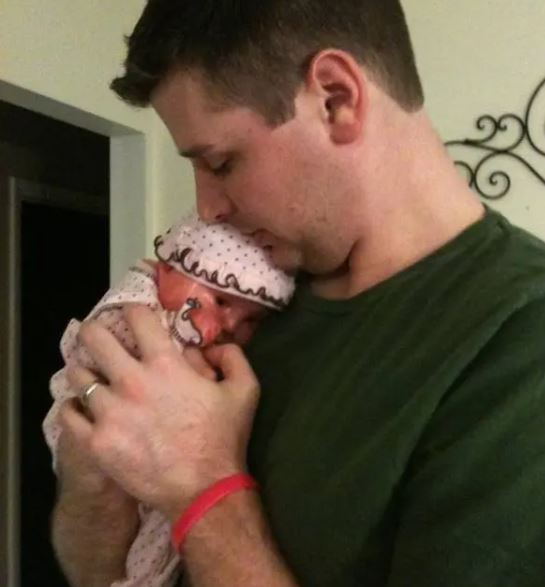 The little baby was covered in thick, white scales at birth. She developed sores all over her body, was immobilized, and had a very high body temperature. Brenna needed emergency intensive care or else she wouldn’t survive.

In contrast to the majority of newborns, her parents had to wait two weeks before they could hold her for the first time. 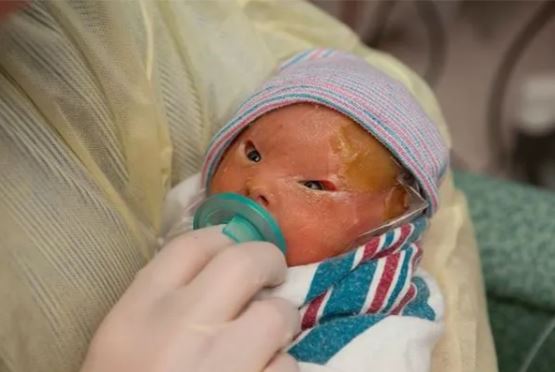 Harlequin ichthyosis is a severe skin condition caused by a genetic mutation. The majority of the bodies of newborns with this syndrome are covered in extremely thick, rigid skin. Deep fractures divide the huge, diamond-shaped plates that the skin develops (fissures).

The illness is deadly at times and is incurable.

The family was aware of the difficult road ahead of them. 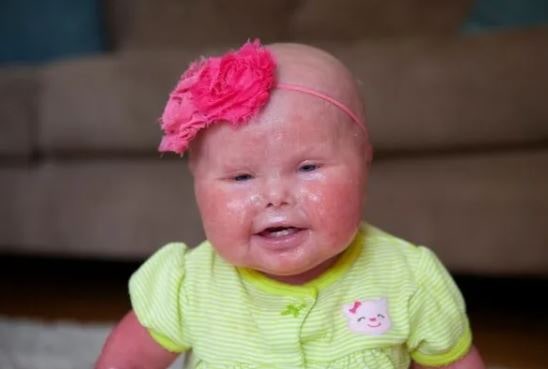 People occasionally shout, point, or ask inappropriate questions when they are out, which made Courtney feel a little depressed. 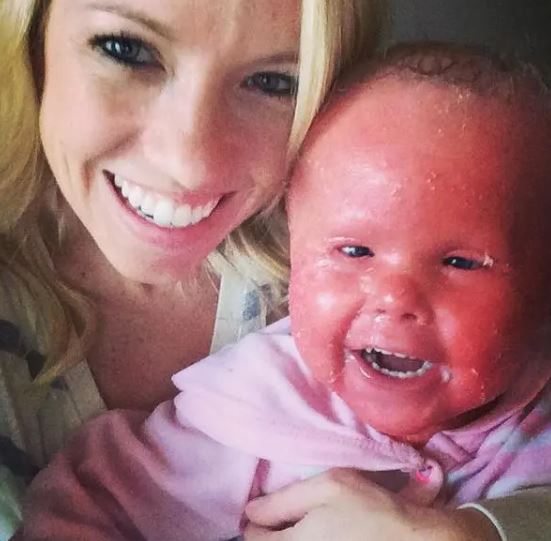 However, Courtney is most bothered by the reactions of other parents when they see her. Usually, they pull their children away and warn them to keep quiet if they approach her. 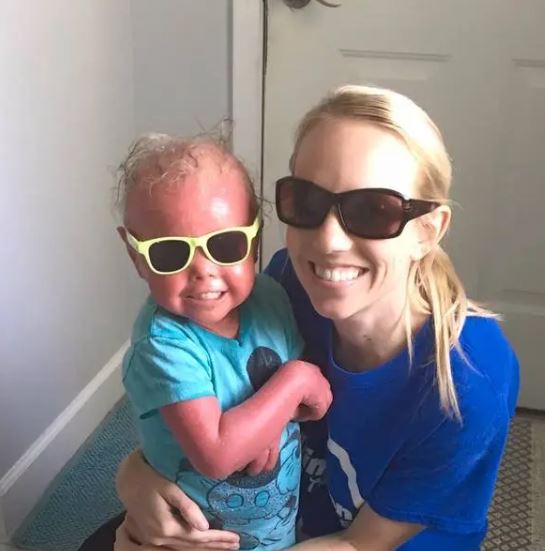 Courtney stays on the playgrounds rather than leaving, encouraging parents and children to approach Brenna and strike up a conversation with her.

Brenna is a confident little queen who never lets anything bring her down. Her family, especially her elder brother Connor, is fully supporting her. 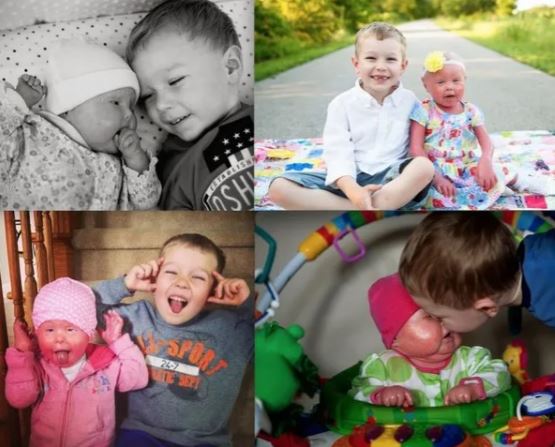 “Why do parents want to avoid engaging with persons who have different looks? What causes their phobias? They might approach me and inquire about Brenna’s age,” Courtney explains.

Why can’t parents be straightforward and reply, “I don’t know, but it doesn’t matter how we appear,” when their child inquires why Brenna is so red and swollen? Each of us is different?”

They struggle to raise their child, but they are proud of Brenna’s bravery.

Every night, Dad Evan bathes his child, which needs careful and deliberate execution each time.

The man now carefully touches his daughter’s skin to eliminate rough patches after making jokes about braiding her hair in the past. 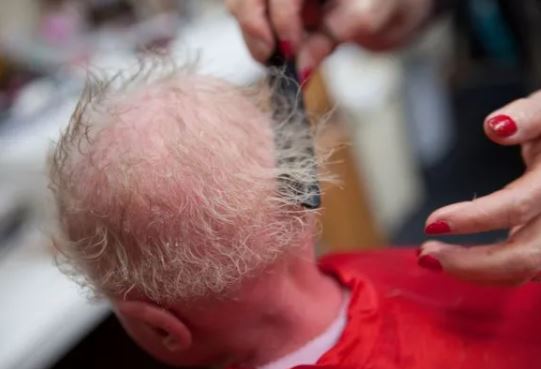 Due to her terrible illness, Breanna has less hair, but her father patiently and lovingly combs what she does have.

Breanna is a typical young child. She loves spending time with her family, playing with her dad and older brother, and reading bedtime stories.

Brenna’s parents continue despite the fact that life didn’t turn out the way they had hoped. They are real warriors at heart.

Courtney currently often describes her family’s lives on her blog Blessed by Brenna. A Different Beautiful, a book she also wrote, was published in August 2016. 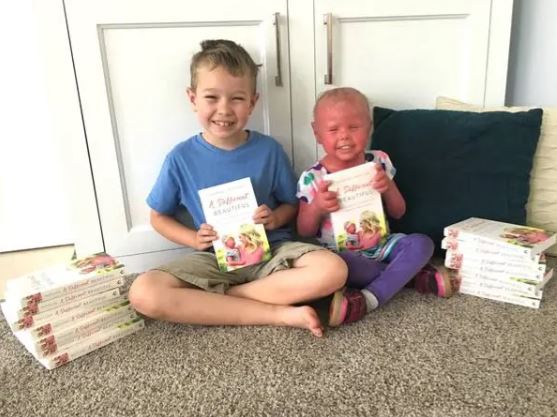 The family wants to demonstrate to people that they can be honest about their lives when challenges arise.

In her present condition, Brenna is a beautiful young girl.

Together, we can make sure that every child grows and becomes a happy person.

Please SHARE this story with your friends and family if you enjoyed it! Many thanks!